Stealth Panther Robotics team 6424 is hosting an unofficial FIRST robotics event. We are located in Knob Noster Missouri. You can find all the details and rules of the game at our Facebook link below. Feel free to reach out to us through our Facebook page if you have questions. Signups start today 2/19 at 4pm central time.

Great event and great effort by Stealth Panther! Lights Out is so excited to have been able to run our robot Starburst for the first time ever. Can’t wait for the Championship. Hopefully it won’t feel like another compilation of all the practice days we didn’t have this year.

How did this completely fly under my radar? I would’ve loved to watch more robots, and while I love our Israel friends, the timezone makes that a hard ask. I’m curious if you’d be willing to publish safety data regarding Covid-19 #'s and protocols at your events. This could be a good indicator for the plausibility of other events throughout the country as more people are vaccinated and we head into the warmer months.

ALL FRC members deserve the chance to have a season! Join Stealth Panther Robotics for the 2021 Hangar Games!!!!!  You get 6 weeks of Saturday qualifying rounds that will rank you for playoff week going into the Championship. There will be a $25...

No reported incidents from our team. We had 7 students and 3 adults. We wore masks other than eating, which was outside. Nothing specific was done for power cell handling, driverstation wipe down, etc. There were 5 other teams competing our day. We were told to have <15, and most were less than that (the one that had more had the extra people mostly outside (not in pits) – I think they were sending a couple in at a time to scout. They had time slots across multiple weekends to limit to 9 teams, and all the weekends are 6 or less with backup robots playing. They did go to 2 vs 2 matches, but mostly to give time between matches. There was some talk of ranking point changes, but I forget the exact details, and there are some of the rules in the linked page. Each team was to provide 1 volunteer. They intended to open outside garage doors (which line one side) but found direct sunlight not so good for vision tuning, so they were closed during matches. We each could park in from of our own garage door, and if that sunlight wasn’t an issue could have just had team trailers be pits, but we did all have inside pits with people spread about as much as possible. It is maybe smaller than you’d prefer space, but one that they have as a place they can have a field.

As far as everything else, it was ran well. All their own field. They are fantastic for all they did. We didn’t use cheesy arena or have real-time scoring. But they had even two working color wheels with a color selection dice which would then be set manually. Robots were on individual networks, and each just started a practice match on the countdown. The event is well managed.

edit: Our county had similar covid cases the last 2 weeks (<1 per 2000 residents) and the event risk (which was missing for MO) was 6% or 1 in 16 chance that a someone with covid would be at a 100 person event. You probably have to do more figuring when teams are from different counties.

Teams so glad those that have been able to attend have enjoyed themselves. I’m attaching several things. First the rules link which explains the rule modifications we have gone with and our playoff structure. I’m also attaching a link to our primary Facebook page where we share lots of information and its a good place to get in touch with us. I’m also including a link to our YouTube channel that has all the videos through week 3 we are still compiling all the matches from week 4. We do stream live each week on Twitch. I will include the signups as we do have a few spots left if anyone is interested. If you can attend one qualifying session you are eligible for the championship on May 8th. Feel free to reach out if anyone has any questions.
Rules- Hangar Games - Google Docs
Signup- Stealth Panther Robotics: Hangar Games 2021
Facebook- Stealth Panther Robotics - Home | Facebook
YouTube- https://youtube.com/playlist?list=PLSuAsk1JTMcKQVoolUA3IyE7iwy5EA6lf

List of teams and current rankings through 1st 4 weeks. 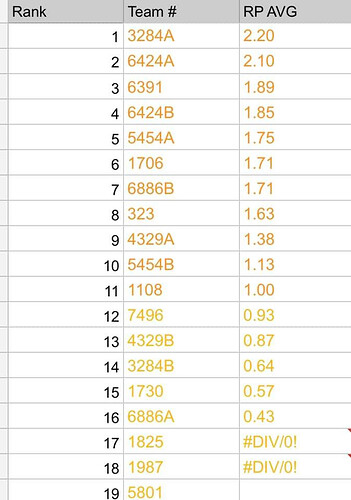 Again serious props for what you guys have pulled off.

Is team 363 BatteryBusters a new team or someone’s backup/second robot?

Edit: Sounds like its 3630, making the trip from Minnesota!