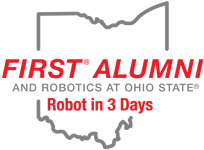 Hi everyone! We represent the FIRST® Alumni group at The Ohio State University and are looking forward to an exciting first year participating in Robot in 3 Days and providing valuable resources to both local teams and the ChiefDelphi community! We will also be competing at the second annual FIRST Alumni Collegiate Competition on February 2nd.

We have created our project team based on these specific goals:

Constant updates, documentation, and whitepapers will be released throughout and after the 72 hours and will be provided on this thread and on our website. Let us know if you have any questions!

’Twas the night before kickoff…

The live stream has now started on twitch! We plan to have the stream live and people working for the entire 72 hours.

Hey everyone! We’re having a a live update and Q&A session on our Twitch stream at 9:45 PM ET! Come ask questions!

Doing another live Q&A Session on our twitch along with updates at 3:00 PM today, so get your questions ready!

Current CAD Pictures, it’s a work in progress! More to come soon! Check them out soon on Screen!

Live Q&A at 9:30 in the livestream at twitch.tv/firstroboticsosu !

We have officially finished our robot, named “THE”!

The following documentation will be released throughout the next couple of days, so check back frequently: 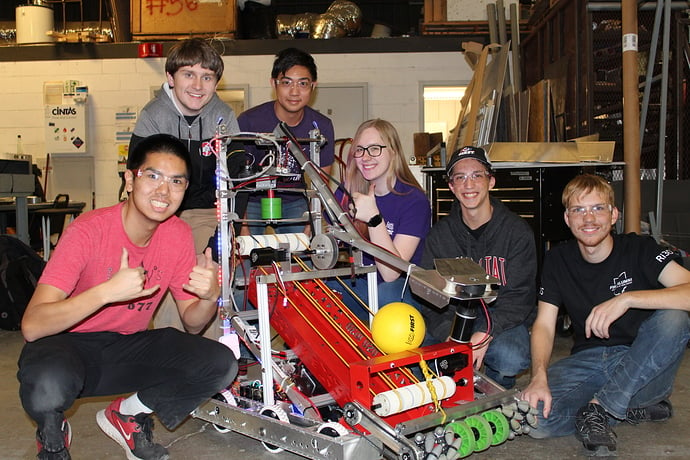 Good evening! We’ll be releasing documentation daily up until next Wednesday (schedule can be found on our webpage). Our Robot Resume includes basic technical facts about each subsystem.

You can find a video describing our low port scoring Intake Subsystem in detail, from its prototyping phase all the up to to the finished product, below:


Additionally, we also presented our robot to nine local FRC teams in the Columbus, Ohio area on Wednesday, January 8 (linked is the Instagram post). 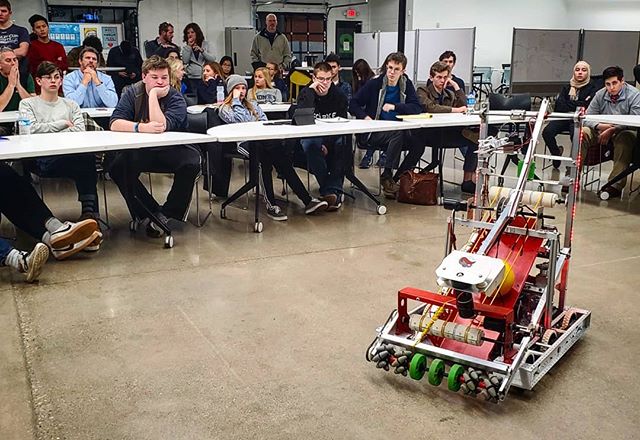 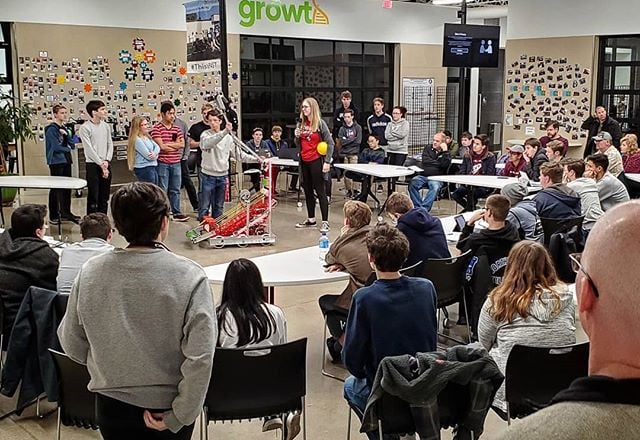 I hope this answers your question:

Yes! Prior to being able to access the field, we only had one power cell to prototype with, so we did not consider what would necessarily happen if multiple balls go through our intake. As seen in the video below, the polycord moves erratically, which directly influences the movement of the power cells.

However, this design can be improved upon in order to prevent the polycord from moving around erratically, such as creating some type of guard on both ends of the nylon rollers and creating a top plate above the polycord to maintain the same amount of compression throughout the intake.

Wow that is a great video. Exactly what people need to see regarding the terrible ball-ball interaction. I still really like the gate idea to have polycord slip when you want it to slip. If a team added a bottom side polycord it would help or fix the jamming and keep the same functionality

So it’s “The”, Ri3D made by Ohio State University?

Also, it was great getting to hear from you at the 3324 event Wednesday!

Alternatively, you can watch this short Instagram story clip of our mechanism in action:

This post summarizes all our documentation released so far.

We’ll be releasing a full robot CAD model by this Tuesday! Ask questions on this thread!