Can the Everybot get Cargo from the loading station (human player)?

Not directly. The human player can enter cargo from the loading station to the floor, where it will roll closer to a scoring location for Everybot to pick up and score.

Can you elaborate on why you think defense will be more important than climbing (for an everybot)?

Good question! Everybot’s mission statement specifies that the robot should be a valuable asset on an alliance in a regional finals or championship elimination match. As such, we think a team who builds an Everybot should be less concerned with qualification rankings than their ability to contribute to an alliance in the playoffs.

Climbing to level 2 of the Hab, worth 3 points more than level 1, is about equal to a single “cycle” differential, i.e. a hatch (2pt) or a cargo (3pt). A robot playing defense should be able to slow down scoring robots on the other alliance enough to deny at least a single cycle throughout the duration of teleop. Additionally, the driver practice gained by prioritizing defense will make a team who builds Everybot better at scoring hatches and cargo than if they had put resources (practice/build time, robot weight, money) into a mechanism to climb the Hab beyond level 1.

A defender could stop their opponents from scoring more than 3 points. Say the defender blocks one whole cargo and hatch cycle- that’s 5 points, meaning the climb has already been made up for with profit. Plus, a low level team probably wouldn’t have the resources to build an effective climbing mechanism. If they really need the extra 3 points, they can always send it to get up there, although 118 hasn’t had much success with that.

Has anyone had any issues with the “Red Stripe” motor interfering with ball transfer? We’re looking at modding the motor’s location to keep it out the way of the ball. If it works, We’ll put up some pics. I’m thinking this our new rookie team’s measuring/mounting problem. We’ve had to learn how to use tape measures, how to read them plus use a set of calipers. Mentoring works. They’re way ahead of our veteran team. This isn’t taught in schools. Shop and life skills are not taught at all.
They’ve done a great job up to now. This is just a mere tweak…THANKS 118 AND ETHAN!
7535 Purple Poison
3355 Purple Vipers

If they really need the extra 3 points, they can always send it to get up there, although 118 hasn’t had much success with that.

Key factors in a successful “send” are a high CG that keeps momentum and helps lever up the back end, and a tight wheel spacing that keeps the bot “flowing” on to the ledge. Everybot as designed has neither of those factors in its favor, leading to the performance shown. Teams should think about those factors before attempting multiple practice sends.

We are building what amounts to a modified version using a WCD with 6 pneumatic wheels in a slightly longer chassis configuration.

It’s a nifty design and hats off to 118 for sharing, but for us the reasons why are as follows:

I dunno. I hope I chose somewhat wisely and it works out. In light of all the snow days we’ve had it seems like it may have been the right choice so far.

We have also choice to go this route as well

Glad to hear things are going well! We tried to place the intake motor as far out of the way as possible. While it seems a ball could possibly hit the motor as it passes up the conveyor, we haven’t had it cause any meaningful interference in the practice and testing we’ve done.

The capture area for cargo is relatively small, meaning the ball is pretty much already centered left/right by the time it’s through the bumper cutout.

The distance from the bottom of the Hatch Top Cross bar to the Top of the Robot’s chassis is 17.64 inches. This distance does not need to be super precise as that bar just helps keep the hatch stable when it is in the robot.

@rstockton429 The pvc sits on the top of the top hatch cross bar so it would need reach the hab. Does 17.63inches reach?

The PVC pipes lean against the top of the Hatch Top Cross Bar. The PVC extends about 3 1/2" past where it contacts the Hatch Top Cross Bar. As you stated the cargo ship opening is higher than this. However, Everybot was intentionally designed to use the edge of the Cargoship to help roll the ball into it. Please watch this part of the Everybot reveal video to see this in action.

We just “rookie modded” the motor on top of the crossmember and did a vertical connection. Note the multiple “vent holes”. 7535 is definitely persistent! Their idea was simple and worked! 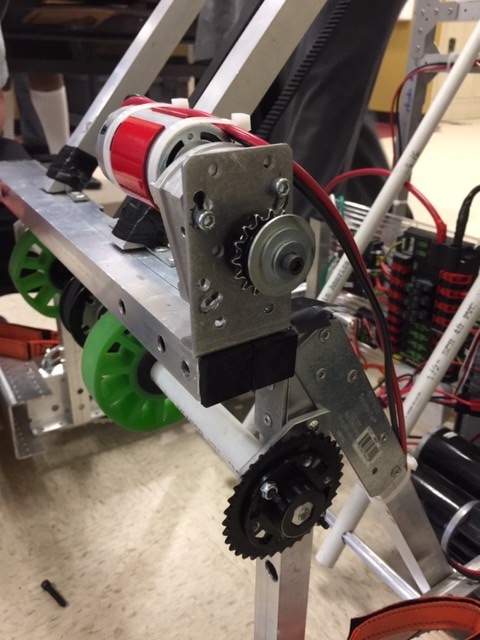 Looking good! Thanks for sharing your modifications. Please feel free to post more updates; I’m sure other teams building a version of Everybot would love to see how you improved the design.

No worries…the young ladies figured it all out. We just mentored. Will do