Over the past month or so, I have begun the process of adapting 1678’s 2021 three motor swerve and SDS’s MK4 Modules into a three motor swerve as a kind of side project for an independent studies class at my school. As we are all aware three motors per module is OVERKILL to say the least (and IMO was only viable in like 3 games 2008,14,21) but I thought it would be a fun project to do this offseason (and in my heart of hearts hope that one day it could be used some day).

First off, in the around 30-40ish minutes of searching on CD I’ve found little to none in the way of documentation for SPECIFICALLY a three motor swerve module. There is the 1678 2021 Skills Competition Submission that encompasses 1678’s small, three motor swerve drive robot. This became the basis of the project. How do I, a largely self taught FRC student, translate a complicated module used by a top team into something that 1. can be understood by me and others (remember this is a school project lol), and 2. that I can feasibly build in a semester of class.

This led into the CAD phase of the project. Starting off, 1678 uses the SDS MK3s + their own custom parts to adapt the module for three motors. This led to “updating” the modules by pretty much plugging the 1678 extra parts onto a MK4 module. This was not a very big feat as the MK3 and MK4 are in fact very similar. I also felt as if I could be a bit more lenient on the spacing/sizing of the motor plates as 1678 had a very small package to fit them into, while I do not. This led to “beefing up” the plates (adding surface area) as well as “sandwich-ing” them (idk the correct term) and connecting via standoffs for extra stability. 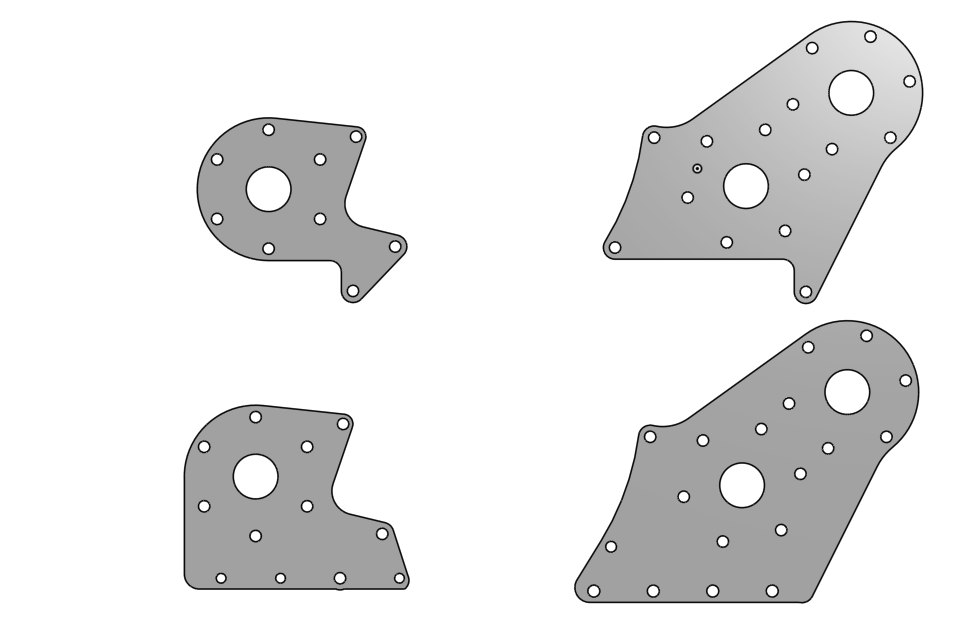 ^right is the CAD orignal of the 1678 module, and left is the “sandwiched(?)” version 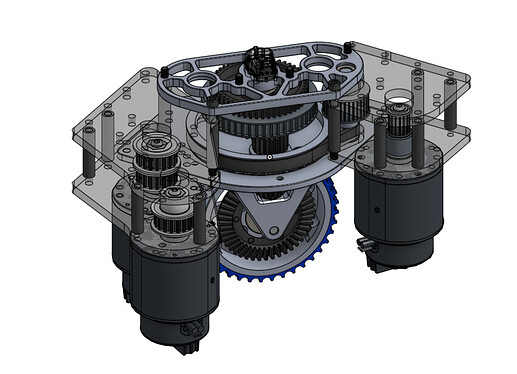 After these steps were completed, we come to the part of the project I am currently on, fabrication. Currently our lab has two MakerBot Method X 3D printers that I’m (trying and sometimes failing) to use to print the two 3D printed pulleys that are seated under the original drive double gear and the original steering shaft. I’ve gotten these prints to work successfully as PLA, but I am struggling to get them to not “string” as carbon fiber nylon prints. I’ve managed to get the driving pulley to print out of the CFN but I’m still working on getting the steering pulley done. I have faith it will work after some extruder temperature changes. Additionally we were gifted a second hand Glowforge at the beginning of this school year so I plan to laser the motor plates out of some acrylic (that isn’t dangerous to inhale when done). I do have doubts about if the acrylic is going to be strong enough to withstand the forces in play. If this becomes an issue, I could contact a local CNC-equipped shop that would be willing to machine some motor plates. 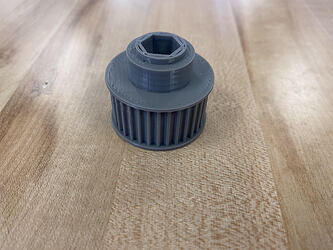 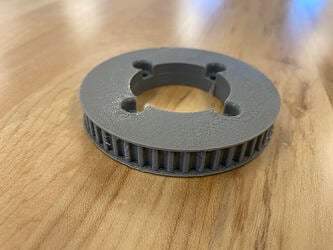 This is all I have at the moment, but I would be happy to keep updating if there is interest, if not no worries, but it might be a while as I’m waiting on some MK4s (hurry up SDS) (only joking of course). I can also post the CAD link if need be. Lmk what y’all think! Any and all input is welcome, have a good one!

Well this explains the carpet shortage.

You may find that you can print plates and get something good enough for form and fit, especially with the filled plastics. Gentle function, maybe. CNC routed polycarb will get you decent levels of functional plates. That’s what I did with Nick Cousin’s Winter Swerve… CNC routed fiberglass will get fully functional, but its kind of icky to route; lots of “don’t even think about breathing this stuff” dust…

So, your goal here is maximizing coolness, right? With a side order of making it easier to break the tires free?

The gods of symmetry are angry! Could you move the second drive motor so it’s equidistant between the first drive motor and the azimuth motor?

If the goal is to make a pro street, funny car swerve, then mission accomplished, otherwise 3 NEO550s would do the trick and still have high coolness factor.

That’s interesting, I didn’t think about printing the plates, I thought they would break easy, definitely going to see if I can do it now.

And yes, coolness and outright performance is the goal here. Our team is from the PCH district, a somewhat underdeveloped district on the technical side so it might be cool as a quirk of the team doing something that few have done soo…

I love the analogy of a funny car swerve, as a fan of drag racing I’m honored, but also at the same time if we can get a performance advantage from this module I’m all for it

It is coming along quite nicely 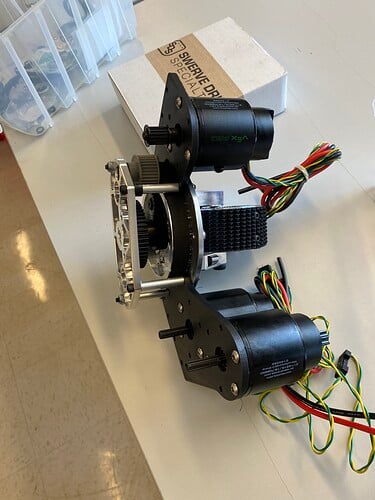 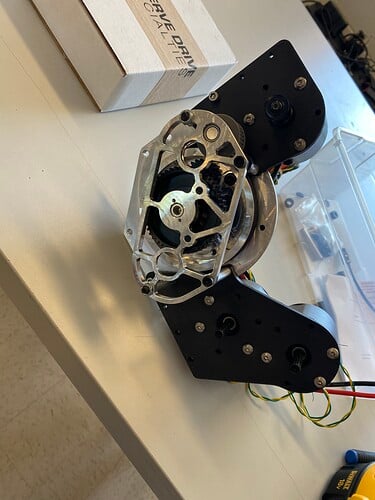 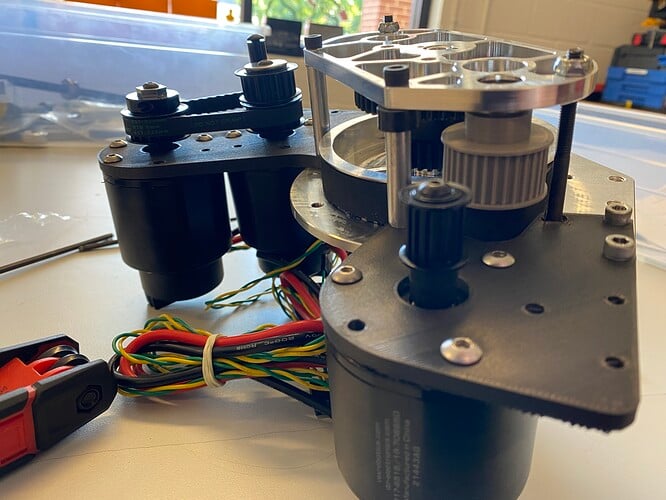 You might want to buy the mineral rights below the venue just in case you hit oil when those things drill down through the floor.