Tipped Cones are a Red Herring!

Many discussions have taken place about how to handle tipped cones. Every Ri3D team that I’ve followed is attempting to handle them one way or another. I’m here to make the argument that a large majority of FRC teams have no business putting any thought into tipped Cones.

Tipped Cones belong in the Hybrid Nodes. I do believe teams should have a solution for that, whether it’s a dedicated minor mechanism or just practice pushing them with your bumpers. I don’t believe that it will be worth it for most teams to spend significant resources, or make significant tradeoffs to enable the handling of tipped cones.

A Cube-only robot is highly effective at all levels of play in this game. A robot that is limited to grabbing Cones from the Double Substation can still be highly effective.

I think tipped Cones are really a challenge for the top ~10% of teams. Having the ability to handle them will certainly be an advantage, but not at the cost of limiting your performance in other, more important aspects of the game.

I’d listen to this person. They’ve been pretty based for the past 3 years (and counting)!
Don’t Overlook the Low Rung! - FIRST / General Forum - Chief Delphi

tell that to a ground intake for gears in 2017. while yes bots can be effective without it, having it raises the ceiling so much i think it is still worth it.

You have 27 cones and 12 places requiring them for scoring. Focus on getting your upright cone safely from the double substation to the node; if you lose it to the floor, go get a new one instead of burning time fiddling with it.

instead of burning time fiddling with it

How much time gets burned criss crossing the field with 5 other robots that are also not bothering with tipped cones? Guess we’ll see at week 0 events how this plays out. But I see impacts with other bots causing cones and cubes to get ejected. Most teams don’t practice getting hit.

If a team has enough students, please devote a couple of brains to working on cone orienting devices.

For a team of any size, the priority should be making sure the robot and driver don’t lose cones in normal gameplay. As Ryan posted, a lost cone here or there can be scored in the hybrid node, so you’re not really losing cycle time by not being able to right it. If you’re playing with a bunch of benny hill robots throwing cones left and right, you’ll stand out as the one robot who scores every cone they grab, and if you’re playing at a higher level, there won’t be a lot of errant cones anyway.

I guess if you have the resources to do it all then you’ll do it all anyway, but I agree with Ryan - especially for Ri3D and smaller teams it’s a waste of effort.

it’s a waste of effort

I see what you mean, but I think there is a really interesting challenge and educational opportunity to consider a solution to the problem. NOT putting all the team’s eggs in that basket… just spending some time considering it, doing some prototypes, maybe even if the end result doesn’t work.

I’m putting 0 effort into designing to grab tipped cones. Either y’all solve it for me or I’m not doing it.

I’m a bit torn. I think that orienting cones for scoring is perhaps the single most interesting challenge of this game, and as a spectator I want to see all the ways FRC teams design mechanisms to solve this challenge.

However, I agree that with plenty of hybrid nodes, it isn’t strategically viable for most teams to spend resources on this. Focus instead on firmly picking up and holding upright cones from the ground and double substation. Maybe practice using the single substation such that cones come out upright. Maybe add some front fins for corralling floored game pieces into the hybrid nodes.

I love the premise you had stating

which, if you didn’t I would have to disagree full heartedly with your statement.
I have been around the FRC world for close to 18 years and the little nuances as tipped over cones can be the deciding factor on whether you win or lose a Regional or even achieve a ranking point. As stated in other comments, the cycle times WILL BE THE KEY to having a great robot.

This is just my opinion and what the students on our team will be searching for a solution for. Everything else seems like something that can be tackled easily enough.

Let the students do it then!

The ability to handle them will certainly be an advantage, but not at the cost of limiting your performance in other, more critical aspects of the game.

Even if you drop it and can’t pick it up, you can still score it in 9 spots.
If anything, a cone pickup is less valuable than a hatch pickup because of this reason.
On top of this, any ground pickup, to be practical, has to be at least faster than cycling back to the human player station to be even potentially worth the extra weight.

Completely agreed. Everything will work back to cycling times, and I’d argue that assigning a task of ground pickup/push-to-score hybrid nodes to a bot without the capabilities to score higher may be beneficial to the chemistry of an alliance overall. Of course, the potential benefit to an alliance is circumstantial, but it’s something worth considering when designing for/around this facet of scoring. 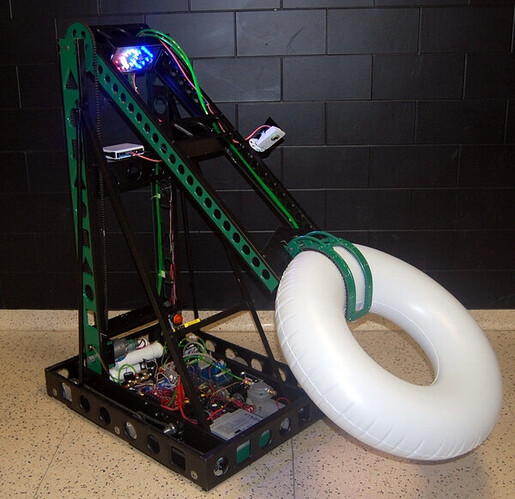 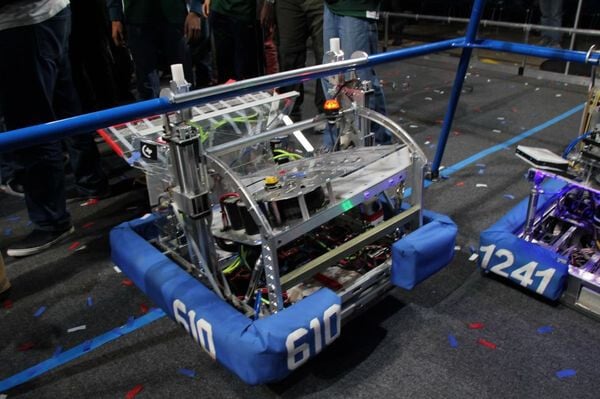 Cones should not come from the ground. Change my mind.

Let the students do it then!

I knows what I saids, I dids what I dids
I am the mentor, and I speak for the kids

To support OP, 2019 grabbing hatches off the ground was basically unseen at high levels of play.

604 and 115 competed at very high levels without a ground intake. Plenty of other robots did too. Also, intaking ended up being pretty simple with a single roller compared to flipping around cones.

I will not change your mind but i do think picking up cones/cubes from the ground at the single substation will reduce your cycle-time in comparison to the double station where your teammates could struggle to get one/you have to line up more precisely. + About 6 feet shorter distance will make a minor difference after about 8 to 10 cycles. That’s why i think most of the top tier teams will cycle between single substation and grids. (after cleaning up the 8 gamepieces on the field.)

What type of cone untiping/righting mech do you think they’ll have out of curiosity? I do think it’s likely that theyll be able to do so, but faster than intaming flat even if it is a little bit farther? I’m not sure. I guess human player techniques of some sort will almost certainly play a role.

(Also, just realized, does this finally mean that we’re playing a game where all 3 human players play an essential role?)