To those using rollers:

My team is having a bit of trouble. We’ve decided to use a type of roller system, with the rollers made of PVC pipe. We were able to crudely throw together a working prototype. Now, we need a more precise design. How did your teams snugly mount the pipe to the motor? Any help on this would be greatly appreciated.

We haven’t tested or built this yet, but the plan I’ve been working with would be to install a plastic plug onto each end of the pipe, and then screw an andymark hub (or Kop or custom made equivalent, depending on motor) onto its face, which the motor would be attached to.

For smaller pipe, the same concept, except with a doughnut instead of plug would work as well.

We are not using rollers of this type this year, but in the past we have cut a plug of 1" thick wood and forced it into the end, and secured it with a small wood screw through the plastic into the wood. The center of the wood can have a hole in it, or a plate or hub mounted to it, to interface with the motor or gearbox shaft. Alternatively plastic can be used, but we found that wood was stronger/easier/tougher/lighter/cheaper.

We haven’t tested or built this yet, but the plan I’ve been working with would be to install a plastic plug onto each end of the pipe, and then screw an andymark hub (or Kop or custom made equivalent, depending on motor) onto its face, which the motor would be attached to.

For smaller pipe, the same concept, except with a doughnut instead of plug would work as well.

This idea works really well. Especially if you’re using pvc. U can use pvc glue to connect a cap onto the end of the pvc and screw or bolt on a sprocket and drive with a chain, or belt, if u prefer.

Well, first of all, why PVC? Its slippery and breakable, why not go for a piece of dowel? The wood rollers on our prototype collector were golden.

As for motor mounting, if you want direct drive, just interface with a hub, as has been said previously. Otherwise, pick a gearbox and run a chain to a sprocket attached via the hub method. The second method offers adaptable positioning and gear reduction, but sacrifices a bit of space.

Have you thought about a flange? You could bolt a hub or sprocket to a flange.

we’re using a lathe and a local machine shop to take UHMW 2" dowels and make the ends of it 1/2" with a keyway and setscrew so we can run a hub-sprocket to them.

We’ll use rollers too. I like the wood dowel ideas – agree they’ve got better surface friction and are less breakable, but we want to do some special surface and handling tricks that will be better with PVC pipe. To attach a drive, drill a hole in the center of an end cap, and place a screw of the right diameter (1/4" or 3/8", depending on the specific purpose of the roller) through the hole, then secure it with a washer, lock washer and nut – and also some epoxy on the screw head (inside the end cap). Then glue the end cap on the roller/pipe. Can then place either a hub, sprocket or motor drive attachment/coupling directly on the screw. We plan to build several roller assemblies, and drive them all from a common shaft going through the base of the robot – with drive sprockets attached where necessary.

Here what we are doing-

Instead of PVC we used ABS (it is lighter). The Tube is 1.5in diameter. We put some caps at the end and did our best to find center. We have no lath but it look pretty good of the low RPM application. The hole was just the right size for some flange bearings to be pounded in. After that we we used the 1/2in aluminum rod that was in the KOP. Since the ABS is only supported at the ends we cut a fiberglass disc to fit in the inside diameter of the ABS. This provides enough support to keep the ABS for bowing in the direction of tension. Callers work great to keep the disc in place.
Stop! Don’t make the mistake we did, use polycord (here is a good thread. To keep the polycord in place use a pipe size that will fit around the outside diameter of your pipe. Cut thin section of the pipe (1/2in) and glue them in with enough spacing for a polycord to fit between the two, now your set.

Here is a pic of your progress. We are not entirely done yet. 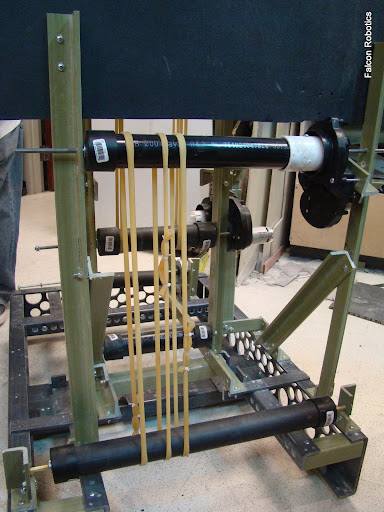 Hope it was helpful!
Good Luck!

depending on if it would get in the way it is always possible to use a pin or set screw to hold an axel, sprocket, or other pipe to the pvc

Polycarb tubing with a plug of HDPE or UHMW about 1/2" - 1" thick. Then we mounted the sprocket or hub for belting.

For attaching the PVC rollers on our prototype I lathed down a piece of Delrin round stock to .003 in larger in the diameter then the ID of the PVC (on my PVC this was 2.035 in) Then I drilled and tapped 1/4-20 center holes into the Delrin and pressed it into each side of the PVC. This gave me perfect point for axels. Also as tube guide Im going to pop rivet strips of treading. Its a bit expensive but for my application I really need the extra grip. You can see 254 use the method on the bottom roller of their 2006 design.