Totally not a bad idea

Hey there folks of the FIRST nation. My team is making a crazy cool robot that is definitely not first legal but we are using basic FIRST components and we have an idea to make two PDP’s look like an engine block. However, we want to actually run the robot off of two PDPs and have two separate batteries for each PDP because we will draw A TON of power. I have pictures below that might help explain. But what I am asking is if it is possible to do this and not destroy the electronics. See the diagram below to understand. The first is the idea and the second is a basis on how to run two batteries in parallel and lead them to one emergency shutoff and then split back. 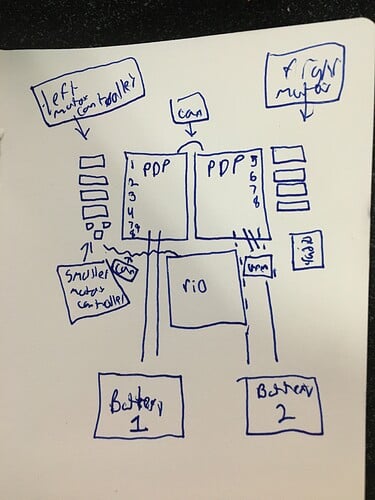 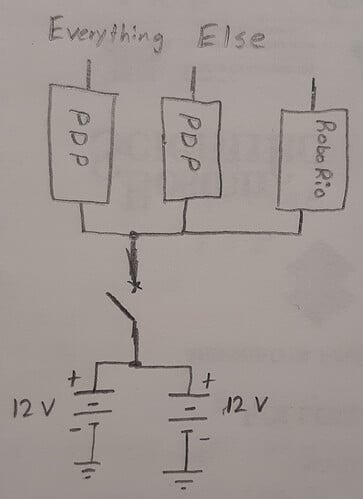 if you have any more questions please let me know

First of all, assuming you’re planning on using a standard FRC 120A main breaker, make sure that you’re doing what you think you’re doing. According to your second diagram, all of your current is going through one breaker. That’s fine, as long as your intent with two PDPs is merely to power more than 16 motors. You will not be able to supply more total current than the standard FRC setup. I’ve used the two-batteries-in-parallel architecture in the past to give me more runtime with a normal 4-CIM drivetrain.

Second, you should not be powering your roboRIO straight off the bus voltage. There’s a PDP output specifically for that.

The biggest issues with the batteries themselves I can think of are having separate “grounds”, or overloading the wires.

First, if you wired up the batteries totally separately to each PDP without connecting them to each other in any way, the voltage at your negative terminals could actually be different, they’re both “nominally” 0v, but if their actually different that can make a difference to any control signals that need to reference to those grounds between the two PDPs. This could cause issues with your CAN wiring, as well as any other digital, analog, ect. IO to the RoboRIO. So I’d AT LEAST make sure the negatives of the two batteries are bonded together with low gauge (thick) wire. If not wiring them totally in parallel before splitting back off to PDPs.

The second of course, is if you are putting potentially double the current through your power wires, you probably want those wires to be thicker to compensate. I probably wouldn’t rely on say 6awg in this circumstance, I’d at least want to go 4awg, if not 2awg to make sure you don’t end up with melted insulation, or worse. You also need to make sure your terminal lugs are rated for the current, WELL insulated, and you use breaker(s) before your PDPs that are rated for the current you expect to be pulling.

Also, in your second pic, you’d want to wire the RIO off one of the PDPs, not separately off the tap before the PDPs. You definitely want the RIO fused, and if your grounds are properly tied together, it shouldn’t be an issue.

According to your second diagram, all of your current is going through one breaker. That’s fine, as long as your intent with two PDPs is merely to power more than 16 motors. You will not be able to supply more total current than the standard FRC setup.

I think you’re technically correct (the best kind of correct), but doesn’t running power over two batteries allow for reduced effective battery resistance and therefore increased voltage + power during high current events (e.g: starting up 6+ motor drivetrain or flywheel)? In other words, you should be able to draw more current without browning out the control system, which is much easier to do than tripping the main breaker at least for a one-battery FRC-legal setup.

On the other hand, since this isn’t for FRC the OP could also just run the control system off a seperate, perhaps smaller battery.

Yes, absolutely, you can draw more instantaneous current without browning out. However, you have to remember, thermal breakers (like the FRC main breaker) operate on an integral-I^2t basis, which means that high-current transients contribute to an eventual breaker trip. So if you’re having trouble with the current spikes when you spin up your flywheel every minute or so, two batteries in parallel might be the answer (although I’d suggest motor ramping first). On the other hand, if you’re doing something like pushing matches where the breaker really is your bottleneck, adding more batteries won’t make any difference.

Basically, if you want to flirt with the limits of performance, you need to really understand those limits, and be able to model them accurately. 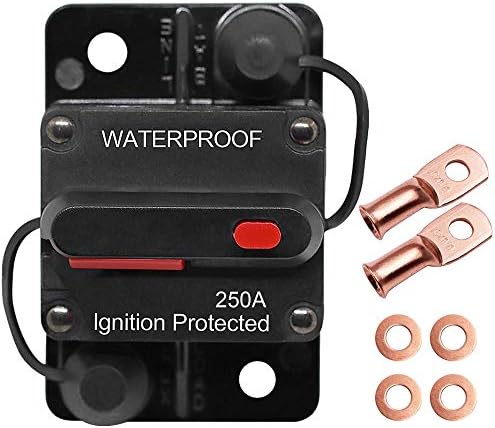 I would look into getting one from a more reputable supplier. That one could be fine for all I know, but a breaker in a housing directly cloned from the Bussmann breakers we use, images with text clearly added in post, and a SEO title on top of that isn’t giving me a whole lot of confidence…

It is just a model lol

I dont think you understand my question clearly enough. First, obviously, I would not run power from Rio to PDP through CAN. That is to symbolize how the two PDPs would communicate. I would like to know if it would be viable to do 2 separate batteries and not fry a motor controller

Provided you wire them in parallel and not series, use appropriately sized wires in the right places for your expected power draw, and properly fuse/breaker everything, no, you shouldn’t have an issue of frying motor controllers.

would not run power from Rio to PDP through CAN

Who suggested you were doing this, and where? The closest I can see is commenting on this diagram: 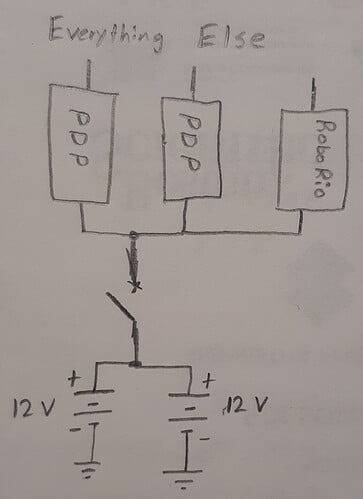 Where it appears you are running the 12v power directly to the RoboRIO from the batteries instead of from the appropriately fused terminals of one of the PDPs. If that is meant to be a signal line for CAN, you should denote those as separate to your power lines.

Second, you should not be powering your roboRIO straight off the bus voltage. There’s a PDP output specifically for that.

here I believe he is talking about the can bus.

Also how can I find the expected power draw and how should I split the draw evenly if I have an odd amount of motors. Though I suppose I could have a useless motor that does nothing but spin

He said Voltage Bus not CAN Bus. The word “bus” in electrical really only means multiple things connected directly (over-simplification, but meh), as in a busbar or groundbar. In your diagram you show your voltage input (batteries), your two PDPs, and your RoboRIO all essentially directly connected along a “bus”. Has nothing to do with CAN.

Your power draw is going to depend heavily on what your load and application is. If you expect to be running 12x motors that could potentially all stall at 40A each all at once for an extended period of time, that’s ~500A of current you may be drawing, of course in nearly every real-world scenario, that won’t be the case, but it heavily depends on what you’re building. Just know that just adding up all your PDP breakers, isn’t really a good guide. You really want to target your expected power draw, not absolute max possible power draw unless you know you’re going to hit that wall regularly and for extended periods of time.

If you’re planning to put a 250A breaker between your batteries and PDPs, then you’d want to use wire capable of carrying that full 250A between the Batteries, Breaker, and PDPs. I’d probably recommend 4awg or thicker wire. Then if you have a 40A breaker on your PDP to connect to a motor controller, that wire only needs to be able to handle that current, which is what we typically use 12/10awg wire for.

If you are connecting your two batteries in parallel to both PDPs, then more load on one than the other is not really going to be a problem since all the load is shared as far as the batteries are concerned.

He said Voltage Bus not CAN Bus.

Thank you gixxy, this clarified quite a bit, see my team was skeptical because people dont like the sound of fried motor controllers for some reason. I think that this post however will help ease their minds. I just came on here to clarify and make sure with the community that this would work well.

The second of course, is if you are putting potentially double the current through your power wires, you probably want those wires to be thicker to compensate. I probably wouldn’t rely on say 6awg in this circumstance, I’d at least want to go 4awg, if not 2awg to make sure you don’t end up with melted insulation, or worse. You also need to make sure your terminal lugs are rated for the current, WELL insulated, and you use breaker(s) before your PDPs that are rated for the current you expect to be pulling.

Wire cross sectional area (and roughly current capacity) increases by a factor of 10 every 10 AWG. This works out to 2x the area for 3 AWG. That is, I wouldn’t replace two parallel 6AWG wires with anything smaller than 3 AWG - so go to 2.

As @bobbysq, you should purchase your protection devices from a more reputable supplier. I did a quick Google search for “Erayco circuit breaker” and could only find online sellers, of which Amazon was the most “reputable”. None of them were specialists for electrical components.

It would be wise for you to get a data sheet for the Erayco circuit breaker that shows the current vs time curve. The one sold by AndyMark has such a curve. It is possible that the seller is relabeling a breaker with a lower rating since they will all carry up to 5-6 X their rated current but for only a very short time, about 1 second in the case of the one sold by AndyMark. This is called “specmanship”, playing games with the product specification to make it look more capable than it really is.

if you have any more questions please let me know

Yes, indeed. If you look at in this perspective.