For those teams that are using treads, what width are you using? (english or metric) Why?

Hypothetically, if we were to use a track drive base… we would probably go with a 2" wide belt. That is, if we could turn with such a thing.

Heck, we’re almost two weeks into this and we don’t even know which type of drive base we are using. sigh.

two inch belts have worked well for us in the past. as Andy said, turning does become harder as the belt gets wider so its important to always add a bogey wheel near the center turning point of your base. this wheel should be slightly lower than the others to provide a smaller turning point for your bot. if done right you’ll utilize the belts traction but lower side loads and friction while turning. good luck.

It needs to be that wide atleast.

we’ve had bad problems with treads, even though the traction is amazing, turning creates a whole new set of trouble. the amount of torque required to turn is immense and is related to surface area to ground, so don’t have too much traction otherwise the motors will draw too much power and reset constantly. also you will get heat problems, so don’t completely encase them, leave an airflow channel and add fans! before you chose your timing belt, experiment as to which one gives the best traction without being to hard to turn, and keep in mind that each tread could have as much as 65 LB pushing down, so weigh them down when testing. also too much tread can leave a metallic ice from Colombia two years ago, where they physically could not move because the motors did not have enough output.

I actually want to see some 2-3 inch treads. That’ll be real cool with a LOT of traction

an old pic of one of our treaded bots! 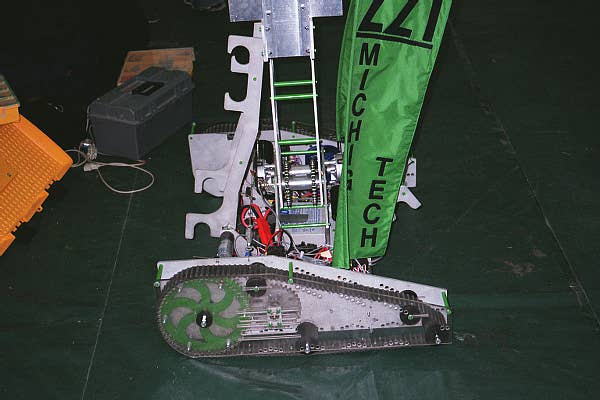 go with whatever makes it easy to turn w. once again if in the middle of the track you have a lower point of contact, that will allow the robot to turn more easily. traction wise it is not going to make a difference because the coefficient of friction equation has no variable for area, so the amount of tread does not matter in that regard.

*Originally posted by R2K2D2 *
**traction wise it is not going to make a difference because the coefficient of friction equation has no variable for area, so the amount of tread does not matter in that regard. **

If we go by the F=mu equation, then yes… there is no consideration for area.

However, after a slew of friction pull tests on the steel grating and HDPE, there are differences. (hint - FIRST is going to Texas for the Championships… bigger is better)

This is the type of thing that Woodie spoke of during the kickoff… you can design and theorize all you want, but the sooner you get to testing your ideas and seeing how things actually work, the better off you will be.

Building a 'bot is kinda like washing your hair, but instead of “rinse, lather, repeat”… you should “engineer, test, repeat”.

If what half of the ppl on the boards say was true… you would see dragsters running on tires .5" wide… more normal force= more friction or so they say.

Personally… I say WIDER IS BETTER! within reason of course.

Before this turns into another “Area matters” vs. “Area doesn’t matter” in terms of friction thing, check out this thread.

The current plan for our robot this year is to have treads 4 inches wide. Last year we had three inch wide tread and never had any problem turning. We use a half-track design with omni-casters in the front to decrease the turning problem. The reason we want to use that much tread is to have as much traction as possible on the ramp and on the HDPE.