I’ve seen these briefly mentioned in a few threads but there hasn’t been much meaningful discussion on the use of a tristar (tri-star ?) wheel drivetrain. From what I can tell a few teams used them with great success back in 2004, but since then I don’t think any have been used and details on those older robots are sparse. The concept would be similar to this:

My team has created a CAD design for such a creature and now we need to decide if we’re going to pull the trigger and use it as our drivetrain, or use a fallback N-wheel-drive skid steer option.

Attached is our CAD. As pictured it’s about 25 lbs, so probably about 45 lbs once we get our CIMs and shifting gearboxes. 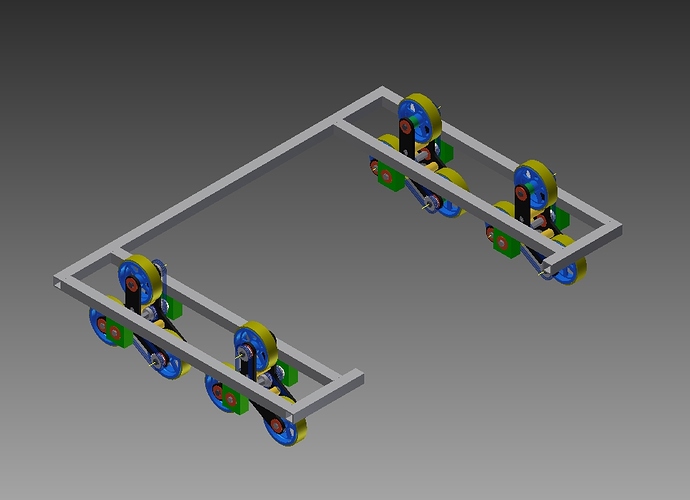 I’m assuming you’d be looking at this for getting over the barrier? That’s really the only thing I can think of for a reason why you’d want to do this. It’s a lot of machining and it’s probably heavier and more moving parts than a standard drive train. I’m just wondering what you’d want to use it for in this game, see if the need outweighs the cost. If you do go for it, show the final result and let us know how it works cuz i’d love to see that, i’m always up for creative designs to ogle over!

If you’ve got the resources, I can’t see a good reason not to do it.

I considered making a drive with a set of those during he offseason, but I can’t see their advantage for the given complexity in the build season. There are much simpler ways to go over the bump. However, if you have the weight, resources, and skill to build it without compromising the rest of the robot, it would be really cool.

Just a question, how do you prevent the wheel module from rotating when you don’t want it to (pushing match), or coordinate the two sides of the chassis?

Yeah, the idea is to a) go over the bump, and b) make traversing the bridge even easier. We were trying to figure out a way to have both a wide configuration and something that can go over the bump. We looked at several variations and this is the one that made us cringe the least. All the other options seemed to have a fairly high risk of the robot tipping over, and/or something breaking from “re-entry”, and/or seemed like they’d take a long time to traverse the bump (negating the whole reason for avoiding the bridges).

I guess what I’m really trying to figure out is: are we over complicating things, or will something like this give us a meaningful advantage?

I guess what I’m really trying to figure out is: are we over complicating things, or will something like this give us a meaningful advantage?

Personally, I’d say you’re over complicating things. However, the argument could be made that I am afraid of that design because I don’t think I could do it! :ahh: If you want look at it for a wide bot crossing the barrier, go for it. Try prototyping as best you can first, though. Also, think about what happens if you don’t hit it “dead-on.” If one corner hits the barrier and starts to rotate the tripod, what’ll happen to the other three tripods? I don’t know the answer to this, i’m just posing the question to you to think about.

Actually, the ground clearance changes. When the front wheel on the bottom hits something it can’t clear, the entire assembly rotates around the center axle, raising the ground clearance for that wheel and swinging the (former) top wheel to the front, onto the top of the obstacle, on one swift move. They’re great for getting onto–or over–obstacles.

Oh, and it takes quite a bit to high-center a tri-star setup effectively, because a wheel that doesn’t hit something solid will just keep turning until one of its three wheels catches, so you need to get it to the point where it only has 4 wheels on the ground (one per star), which can be pretty tough to do.

As pictured the center of rotation for the star hub is 3-7/8 off the carpet. An equivalently sized standard wheel, 7-3/4" in diameter, would not traverse the bump very well. Tri stars also elongate your wheelbase, reduce the maximum angle your chassis makes with the ground, and reduce shock. These benefits will add stability, reduce risk while traversing the bump, and hopefully make it a quicker process to go from the frontcourt to the backcourt.

Just a question, how do you prevent the wheel module from rotating when you don’t want it to (pushing match), or coordinate the two sides of the chassis?

Would it do this? I’m having a hard time visualizing how these wheels would behave in various situations, such as you describe. The team did discuss being able to lock the entire star assembly in place, which would turn us into a standard 8WD bot, but didn’t know if it would be necessary or not.