Hello Chief-Delphiers. Hope all seasons are going well. At the beginning of build season, there was a discussion about buddy climbs. We went to our first competition this past weekend, and maybe half of the teams could actually climb reliably. So going back to this topic, what are your thoughts on having buddy climb. If you had to choose between a five ball shooter, or a triple buddy climb, which would you feel brings a bigger benefit to a team? I was actually surprised that our number one alliance outshot another alliance, by over 40 points. But still lost because of the endgame. (Many matches ended the same) If you could guarantee a rank point every match, as well as possibly win every match you are in without firing a single ball, is it a valuable strategy? 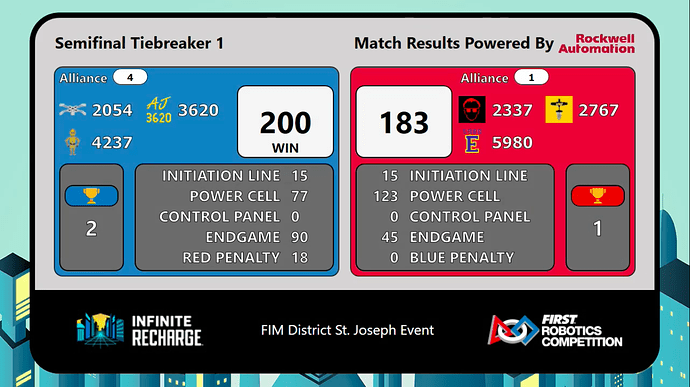 I’ve said it before, and I’ll say it again. Buddy climbs are not the right decision for 99.9% of teams. Maybe 10 teams in the world will successfully pull it off this year, and those are the top of the elite teams. And even those 10 teams probably won’t have it working for their first regional. For everyone else, you’d better pick 2 robots that can climb on your alliance, or you’re not winning your event. If there is anyone reading this can’t climb, that is your number one priority before your next event.

A buddy climb also has diminishing returns as the season goes on. The earlier the event, the most likely you’ll get paired with a team that can’t climb on their own. As the season goes on, teams will make improvements and/or add a climber. Then by champs, you weed out a lot of teams that didn’t make a climber, and instead of 60% of the field being able to climb, 80% of the field can climb. Now your buddy climb is worth even less in a match.

Besides, that match you mention didn’t need a triple to win, from the points, it looks like Red had a single climb, it was balanced, and one robot parked. I assume at least two of the robots on Red had the capability of climbing, being alliance 1, so both should have done that in order to win.

Alliance 1 had all three bots have a climber, but only one robot climbed reliably all comp. The other two climbed half of the time. They were winning the match, up until the end game. Penalty points also played a role.

If both could climb, but didn’t, then what chance do they have of making a buddy climb work? It relies on both teams to be coordinated and drive with precision.

Besides, the type of buddy climb that I think might actually have a shot, is the 1678 style, robot-wrangler, and that requires pre-match planning of adding a velcro strap, so having climbs not work mid-match and have to adjust would not have worked in that instance.

The only way my team was able to find one to work, is if you drop it under you basically. We did the cad work, and it was possible. But very challenging. But aside from that, I’m not sure how any other team would complete it. There was a team who had one there, but it failed badly.

We designed to be able to single buddy lift almost any robot partner, and we came close to pulling it off for Week 1, which would have been fantastic, but the devil is in the details, and it had a few issues we just couldn’t resolve, and it cost us being able to climb on our own, and likely cost us a place in eliminations rounds as well. Definitely not easy to do buddy climb of any sort. Today we completed reworking our climber into a more reliable solo climb, just moments before our second regional event was cancelled…

Sorry about your second event.
Just watched your matches, and your climber scared me. Lol. Cool design tho.

Which is true. But that’s only a double climb. I’m talking true triple climber. Tho I suppose even getting a double would be considered a success.

Super true. I haven’t looked, but someone had told me that it was illegal this year to replicate their climber. Due to a change in rules I think? I never read up on it myself to be honest tho.

I’ve seen several of that type, essentially doing that Barker Redbacks tried to do last year, and so far I’ve seen it inhibit their own climb from working, and then also not work as a buddy climber.

As a team who designed a triple buddy climb, it’s almost impossible to use, and it will be more and more useless as the season goes on. I wish we put more time on a reliable climb instead. We are definitely working on improving our climber and ditching our triple climb. It was awesome nonetheless to design and be the first to release such a mechanism this year, and the learnings were valuable.

There is room for three on hanger … I would not count on "BUDDY climb " improving it’s chances of success in any way . That is from a team that pulled off repeated 90 point climbs in 2020 in regional already (buddy not needed) just good scouting

Can you imagine scouts in the stands factoring in buddy climb efficiency? IN 2020? When scoring outer is key up to climb up to the climb itself?

You better hang and score some or not be picked by those that can make any decisions on alliance makeup. In other words :Buddy climb is a completely ineffective strategy in 2020 was good in 2019 as it threw even "hanging teams " off that could not do L3 climb (very dis-satisfied with that). We prefer the 2020 hang challenge. Back on track.

It’s illegal to cheesecake on an entire mechanism, like how last year teams were strapping on suction climbers to their 3rd/4th robots at champs. However, the general consensus is that adding small items like a velcro strap or hook (that isn’t an elevator) is still allowed.

No. But it sure helps. Especially if you were outshot or something. That extra boost is nice to have in points.