In 2018 and 2019 my team has had a lot of trouble with the endgame at our competitions. In 2019, we quickly tried to add an level 2 climb at competition, and it actually worked. However, it never did on the field, after we got back we were able to determine that it appears to be battery related we were able to climb as much as we wanted on a fresh battery but if we drove the robot around at all then we would be unable to climb.

Is it best to try to design our endgame mechanism to be more battery friendly? What are good ways to go about doing that? Are all our batteries bad?

By battery-related do you mean the battery was browning out in the driver station?

Thanks for the quick reply, yes it was browning out. The voltage was also kind of wacky throughout the competition now that I think of it. Just normal use seemed to drop voltage down quite a bit. So I guess the battery problem would actually be throughout the whole match but was only hurting us during endgame.

Did not have drive computer on me to take screenshot but here is picture from when we were at an offseason competition that shows the problem. 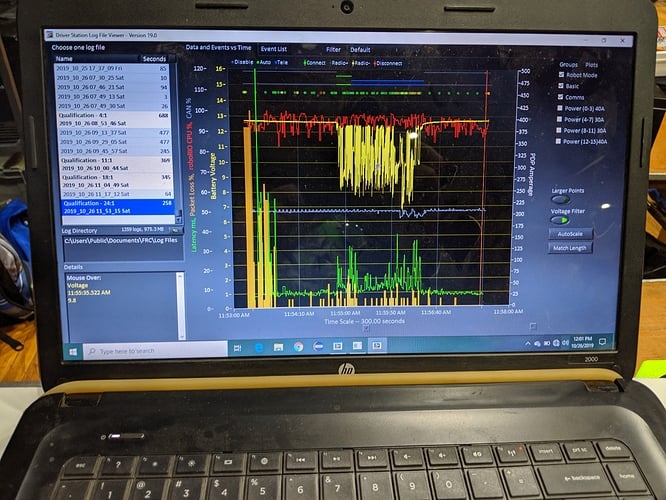 For starters how many different motors were you running and what type of motors?

alright sure.
4 cims for our mecanum drive
2 bag motors for ball mechanism
1 cim for lift
1 pg motor for slider
1 pg motor for arm
1 bosch window motor?
so 10 motors
No pneumatics in 2019
I think lift and arm might be part of problem because we gave them some power to hold them in position.

Additionally how old are your batteries and do you have a battery beak to check them before each match?

I am not actually the electrician for the team, but I know our oldest batteries still in competition use are from 2016. I have not spoken to electrician but I believe we have used load tester from car to test them in past. Not before every match though.

Okay I’m pretty sure your batteries are the issue. The starting voltage (per the image) says 12.7ish. We don’t run our batteries unless our battery beak says 13.0 or higher. We also use brand new batteries every year for competition.

+1 to above it is recommend to use comp batteries for 1-2 years and the rest for practice. This also depends on amount of matches you run per year.

I think that we will have to order new ones then and specifically use them from competition. As well as make sure to test them. We did a lot of stuff for the public to see offseason too which probably makes the batteries worse when we need to use them again this year.

Thankyou for the help

You also need to look at end of match battery conditions.
During the match, the battery discharges as energy demands of the robot occur.
Towards the end of the match, the battery will be at a lower Voltage and a higher resistance.
You may need to factor these effects into your system and mechanism designs.
Make sense?

Yes it does, that was probably also a factor at least in 2019 I figure that robot was relatively demanding. We will definitely consider that in our endgame mechanism design

You may want to get a Battery Beak to measure the internal resistance. There are threads here on CD indicating the values people use as thresholds.

You should also ensure that all your crimped and bolted connections are tight. A loose connection can increase the effective battery internal resistance making brownouts more likely. Do a pull test on every single crimped connection. Any bolted connection that can be rotated with finger pressure is too loose.

… appears to be battery related we were able to climb as much as we wanted on a fresh battery but if we drove the robot around at all then we would be unable to climb.

Is it best to try to design our endgame mechanism to be more battery friendly? What are good ways to go about doing that? Are all our batteries bad?

I’m going to add one thing to look at that I haven’t seen anybody else mention yet. Using up a lot of battery during a match is often due to running motors in the “inefficient” portion of the power curve.

Basically, you get more useful work out of a motor for a given amount of input power (greater efficiency) the faster the motor is turning. You don’t mention what you are using for gear reduction ratios for either your drive base, lifter, or other mechanisms. You want to have sufficient gear reduction so that you are typically running motors fast even if the mechanism isn’t intended to go very quickly.

On our 2019 robot, the overall gear reductions on our lifter and our arm, were in the neighborhood of 1000:1 – this enabled them to run very efficiently, meaning we could easily run multiple matches on a single battery and still have plenty of oomph left to climb at the end. (We would regularly run 3+ matches from a battery in practice sessions.)

Yes, we neglected to look much into that last year.

I think this is a great question regardless of battery condition - that absolutely plays a part in it, but a team with a fast drivetrain, high-speed shooter, and/or roller intake will absolutely want to consider their battery drain if using motors to climb, because those other mechanisms ARE killer on batteries. Even a team that’s building a robot to just play defense and then climb (no ball or wheel manipulation) needs to think about this, because pinning and fast starts/stops/change of direction are also draining!

You’ll want to look at ways to reduce/conserve current draw on all of your major mechanisms - climber included. You could do this in design by current limiting (in code), motor selection, gearing, using non-electrical methods as counterbalance to reduce the load on your motors (springs, gas shocks, etc), and/or changing some mechanisms to being pneumatics-driven instead of motor-driven. Your drivers can also help you out by not running systems when they’re not needed (e.g. don’t run the intake if you’re nowhere near a ball). I don’t have any links handy on any of these topics, but hopefully this gives you some ideas to research!

Ken’s comment about using all the motors at their most efficient RPM is a good one. And this is especially true for the endgame…you want the motor to be loaded no more than about 20% for the endgame mechanism. If the motor is only slightly loaded, then your mechanism will still work with a discharged battery.

We don’t run our batteries unless our battery beak says 13.0 or higher.

Annoyingly, many popular chargers won’t actually go to 13v. We ended up clinging on to some 2011 era chargers to “top off” from the 12.8ish our newer chargers get to. This seems to be an issue with both the AM 3 bank and the rookie KoP charger.