My team is looking for a new way to track our students attendance and hours spent throughout season. We currently are just having student mark on paper when they arrive. I would like to start keeping better track of individual students and their hours without needing to do some weird stuff with google forms/sheets.

Does anyone know of any software that can do this for us? Or anything similar that your team uses? Preferably free, however I know most good software isn’t.

We’ve been using a fork of Team 900’s timesheet for a couple of years now, it works pretty well.

We haven’t used this as a team, but I really wish we did. It’s pretty nice and the developer is super nice. GrizzlyTime - Google Sheets based Logging System

We have a nice fingerprint reader clock we have by the door. It’s far more than any team really needs (but one of our mentors works at the company that makes/sells them, so $free.99 was a nice price). However, I can imagine it not being too terrible to set up a fingerprint reader to a raspberry pi to log hours.

I actually wrote a software package exactly for this purpose! You can find it at https://github.com/tweirtx/timetracker

If I recall, 3128 has a nifty attendance tracker with some kind of Raspberry Pi powered barcode reader.
Paging @quarky for details?

We use a fork of GrizzlyTime called FalconHours. We got it running on a RPi 3 and the whole system sits at the entrance of our shop. It’s been super convenient so far!

We use ChopShopSignIn, which has the students (and mentors!) scan a barcode or QR code that has their name encoded into it. It stores sign in/out into a CSV file that can be queried and manipulated at will. I don’t know much about pivot tables or how that part works, unfortunately.

There’s also an Android app that (shameless plug) I wrote to provide a shortcut so people don’t have to scroll through all their pictures and folders to find their QR code and can have it saved on their phone.

My university actually has an iris scanner hooked up to a raspberry pi where you can scan into the dining hall without needing your card. Might be a fun project for a student to work on in the off-season. Iris scanners are great since you always carry around your eyeballs, and you don’t need to install anything!

We used this last year for students and mentors. Easy and worked great

I’m a big fan of Team Culture! Not sure if you can find it on the App Store, but it’s free and works pretty well once you get the hang of it

Thread created automatically to discuss a document in CD-Media. Beach Cities Robotics Clock In System by: akeisic Complete and customizable clock-in/out system that creates membership badges, displays pictures of who’s in and automates analysis for real time knowledge of membership participation. Like many FIRST teams, Beach Cities Robotics tracks the amount of “lab” time our mentors and students spend working for the team. The attached files provide everything you need to know to properly c…

I wrote the Python variant of this that 294 has been running on a old rPi for the past few years.

Hehe we do have a nice Raspberry Pi setup. Unfortunately I’ve already left for college in Indiana but I can ask our new Head of Programming to y’all about it’s function. A boiled down version of it is that it scans in and out all our School ID cards and we are only allotted one “manual” log sheet if we ever forget to scan in to log hours.

The geek solutions are great - we can do THIS to make it easier.

But please check the local laws! In some places it may be illegal for us to collect biometric data (e.g. fingerprints or iris scans) for anyone under-age. In the U.S. this would generally be at the state level.

Sometimes it seems like we need a role on FRC teams for legal consulting.

We use Tsheets. It is a commercial time tracking and scheduling software. Enough features to keep any data junkies happy. It has a app for smart phones so you can log in from anywhere you can get a signal.

Last year my team piloted a Windows app I wrote for our team which was supposed to run on Windows 10 IoT on a Raspberry Pi, but due to performance issues, was regulated to running on a laptop. Students checked in/out using a USB-RFID scanner with their student IDs. It was convenient because rather than make up a new list of IDs arbitrarily, we just reused the school’s existing ID structure.

The app was written in C# which tracked the data in our teams G Suite environment using Google Sheets (as a poor mans database). It was definitely a pet project which was useful enough during the build season, but could use some improvements including being able to track time spent outside of the build room at community events, etc.

If anyone is curious to look at the source code, I have it up on GitHub. The limiting factor for this particular setup is it doesn’t run outside of our team’s G Suite environment due to needing a Google Sheets API key which isn’t readily available unless you are a member of an organization. I’d be happy to answer any questions about the source code if there are any interested parties.

Future considerations for a better app include using AWS to house the database and application and have the client side simply send data to the server.

After doing our timekeeping on paper for many years, we started doing it on a computer for a couple seasons using the Beach Cities Robotics program mentioned above. Overall that worked okay, but it wasn’t optimal.

Three seasons ago, we bought an Acroprint Biotouch time clock which has a fingerprint scanner. It was a couple hundred dollars. Not free but not too crazy. It works great for us. We store it in a locked cabinet overnight, and then we can quickly pull it out to use when we’re in the shop. The fingerprint scanning works pretty well, so it goes pretty fast when a bunch of students need to clock in/out all at once.

The main drawback is that the students can’t see their times whenever they want. We have to regularly download the Excel file from the Acroprint, print it out, and post it on the door.

Hi there! Author of GrizzlyTime here.
GrizzlyTime is quite configurable, account creation is fast and takes less than a minute per person. Its compatible with barcode readers as well. The ID system is customizable, and all information is presented in an easy to read google sheet.

Because it uses google sheets, you can then share a read only version of the sheet to whomever you want.

The price to set it up? Internet and a Computer!

Here’s an example of the statistics GrizzlyTime can provide.
These statistics are generated automatically, and individual student stats can be accessed by navigating to the “Date Log” page. 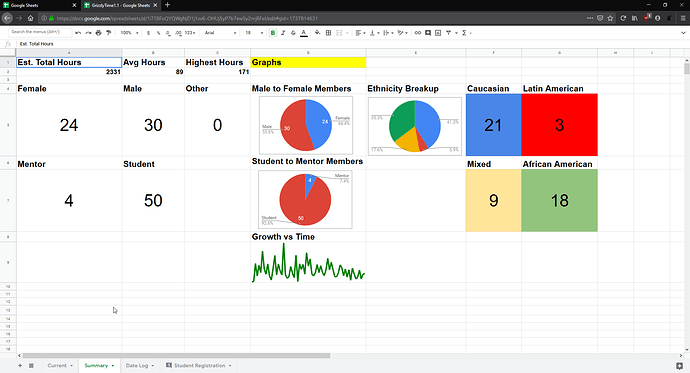 We did a RFID tag system with a USB RFID reader hooked to a vintage Classmate PC.
The original system tried to update a google spreadsheet in real-time. We had several issues with that so we refactored it to write to a local db and then export/upload the data to a google sheet once a day. All the reporting is done from that master google sheet.