With a Neo 550, our module is geared at 228 rpm. 6 - 48 by gear and 11 -60 belt. Getting rid of a gear box has been a big positive. Gone is that little wheel twitch when accelerating from a stand still at the biginning of auton. In the past , we have had a problem with the gear lash in the system increasing as the the various gear boxes we have used wore . A 20 DP 6 tooth pinion is not a normal involute profile. The interface with a 48 tooth gear is not ideal. We 3d printed the 48 tooth gear with a slightly modified tooth profile. Almost 0 backlash and reduced mass in the system. The steering response this year with eliminating the gear box is so much better. Highly recommended for anyone designing a swerve.
The TTB swerve is a perfect example of how 3d printing is changing First. Would anyone want to machine that module using classic subtractive methods?

95 rpm translates to 578 deg/sec. Do you really need your swerve module to rotate more than 578 degrees in one second?

So as Nick said so elegantly…Yes

Reducing backlash is probably the bigger benefit of reducing the number of gear stages. The resulting increase in speed seems noticeable in terms of responsiveness, but it may actually be the reduced backlash that makes it feel more responsive.

The other thing we did in 2020 is we use the NEO’s encoder for steering control instead of the absolute encoder. The absolute encoder is still used for initial position measurement, but not for control. The result is that there is no backlash between the thing you are controlling (motor position) and the thing you are measuring to drive your control loop (motor position). This results in a much more stable control loop and has really eliminated the wheel twitch when moving away from a stationary position.

Do I really need the module spinning faster, probably not. But it can and it can have control system and packaging advantages. And removing the mag encoder was just a thought that I had. You don’t have to do it but it can lead to certain advantages if you are willing to accept the disadvantages that you stated.

Yes, taking slop out of the mechanical system and reducing rotating mass are usually good for a control system. Increasing the response rate of a sloppy mechanical system is usually not going to make things better.

If I remember right it’s got about a 20:1 reduction. It spins really fast: As far as being light. I think it’s much the same as with other mechanisms. In general order of significance: Make everything smaller Reduce part count More efficient load paths Material selection Lightening patterns


That video is the Hermes module doing 90° moves in ~0.1sec, or ~900° per sec average. It will be interesting to see how the falcon compares.

Is the main gear housing 3D printed? If so how has it held up in testing? My team is very interested in this module but that is the only thing keeping us from placing an order, and in the event it fails or breaks how easy would it be to get a replacement part?

Is the main gear housing 3D printed? If so how has it held up in testing?

We’re going to post up some additional wear data on the large 3D printed internal gear later this week. So far we’ve seen very good wear results on this part, but understand that it is an unknown concern for teams.

Regarding spares on this part, it’d probably be smart for me to add that to the Thrifty Swerve page so teams can order spares. I’ll get that posted this week. Also if you have any failures with any Thrifty Bot part you can always contact me directly and I’ll make it right.

Is the main gear housing 3D printed? If so how has it held up in testing?

Here’s one of the internal gears that has had most of the grease cleaned off and has 2 events worth of drive time & wear. So far the internal gear is holding up and hasn’t seen excessive wear on the gear teeth. 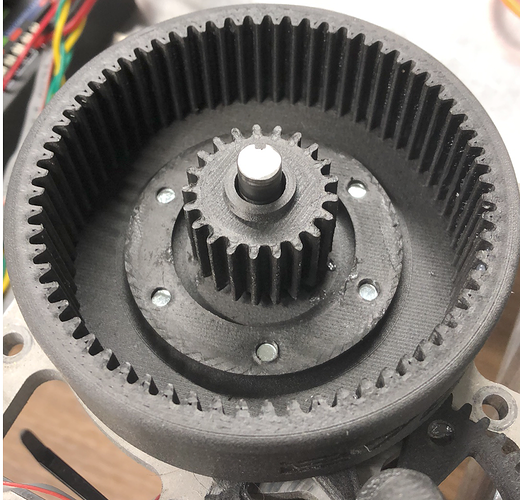 Here is also a picture of the wear on the two wheels with black SBR two ply rubber tread. 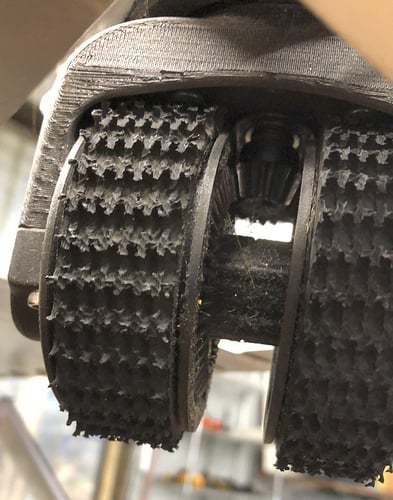 I’ll also go ahead & announce that we have a quote on a metal wheel saddle and will be producing that & including it in the kit with no price change. We’ll still have some testing videos soon with the printed saddles as well but there seems to be enough concern about the printed wheel saddle that we’re going to produce an aluminum one. 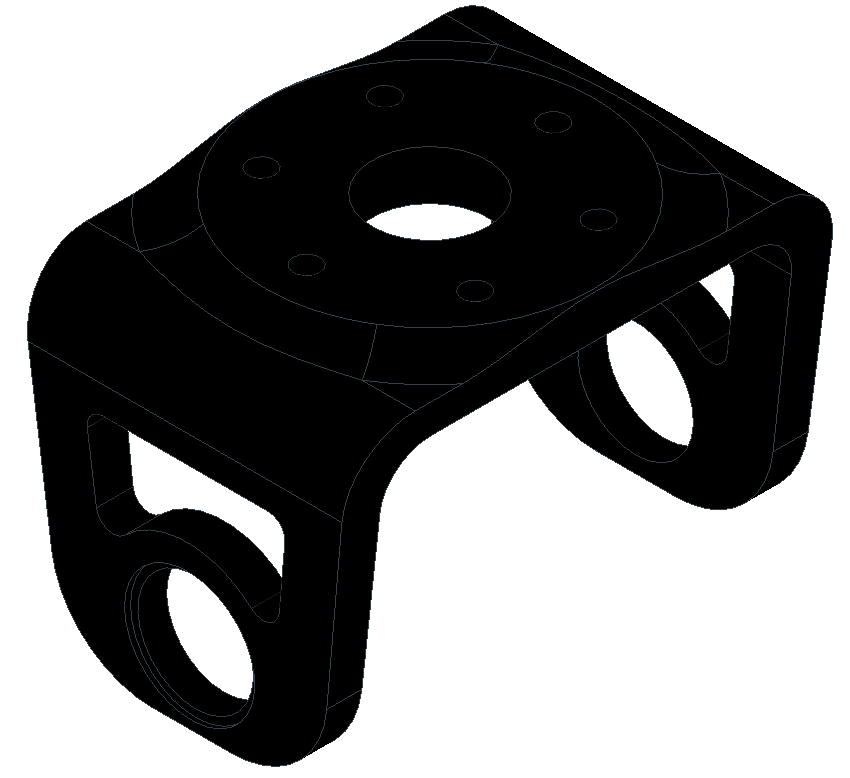 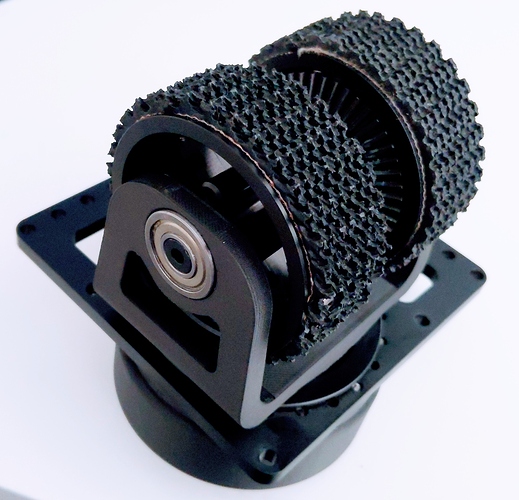 Should have some more testing videos up soon, stay tuned.

With the release of all these awesome swerve options, I’ve decided to drop our price even further to be competitive.

The main module kit is now 199. Those who had pre-ordered will see the difference refunded to them ASAP. Thanks!

This is such a cool thing for a supplier to do, very nice.

Gonna hold out on this one and just wait until Ryan starts paying us to take the swerve in about a month.

Significantly reduced price and a free upgrade? Either @Ryan_Dognaux was ripping us off before or he’s ripping himself off now.

Or he has gotten more support behind this new module and able to get a bigger quantity discount on materials.

That is a likely, logical factor, but it’s not as funny when you put it that way. I trust Ryan knows what he’s doing and has our best interests at the forefront. TTB Swerve is now a very competitive option.

Significantly reduced price and a free upgrade? Either @Ryan_Dognaux was ripping us off before or he’s ripping himself off now.

Ryan just needs to teach them to design and sell their own swerve modules.

With the metal fork, has the module weight been updated on the item listing?