Check out the CAD on 148s 2017 robot. It’s a stack of ball bearings (big little big) tangent to a round cutout. There is a bolt running through the ball bearings attached to the gear/sprocket.

I saw that but didn’t want to post in there as the author was interested in shooter types rather than actual turrets. I didn’t want to hijack his thread

The “sets of bearing stacks” design like 148 did in 2017 is probably the easiest way to make a turret. A number of teams have used it in recent years, and it’s relatively well documented. You can do it with just basic CNC machining and no special parts, and it’s fairly robust.

For a prototype you can try a lazy susan type setup, but you should be careful about side loading. Most lazy susans you’ll find are meant for light loads close to the plane of the ball bearings. If you start putting long arms or extensions on them and those extensions see side forces, that high eccentric load can actually rip the lazy susan plates apart and release the hundreds of ball bearings all over the field. There exist industrial turntables that can handle much higher loads, but they get expensive very quickly.

@Torrance from 254 also talked about how they did their turret setup this year here. The real key is that they have two bearings: one large one around the top of the turret, and one smaller one at the very bottom. By using two bearings spaced as far apart as possible, any eccentric load on the turret gets absorbed radially by the bearings instead of working to pull the bearing apart as it would with a single bearing. This is probably the most robust option against side and eccentric loads, but it’s also likely the hardest to pull off. It takes very careful design, complicated machining, and special parts that can easily get very expensive (that huge thin-section x-contact bearing).

You can even use thrust bearings on the bottom and top of the stack to constrain it. I first saw this stacked setup on Rush’s robot in one of the first behind the design book. Perhaps 2006?

So the way I see our team could accomplish this is laser cut or plasma cut a thin piece of aluminum with a circle in the center. We could then laser cut a big sprocket to which holes would be present for attaching a mechanism and the bearings. The plate with the central hole would be raised by mounting it on 1x1 or some form of tube around the perimeter and that assembly could be raised by using L-channel. Does that seam plausible. Btw, it’s one of those industrial laser cutters that our sponsor has. Idk if plasma cutting would be better though. We don’t have a router (that works at least)

For some additional reference, here is some detail about Code Orange’s turret:

[IMG_20190210_180803] [turret] We are using a custom-made roller pinion drive that basically consists of a pinion with rollers arranged in a circle and a large internal ring gear. The rollers are on bearings and rotate freely instead of sliding against the gear teeth, so it has very low friction. Due to the nature of the design, there is practically no backlash if it can be manufactured accurately. We made the ring gear on a CNC router and CNC milled the bearing holes on the pinion.

Slewing Bearing > Lazy Suzan. The armabot COTS option employs a slewing bearing with a realy clever technique of flipping a belt inside out. If your turreting inside your frame perimeter this is a really great product. This turret drive has a large slewing bearing for structural support and the ability to pass objects through the middle.  The drive gearbox and motor (not included) are positioned on the outside and includes the hardware to be mounted going up...

Spewing rings are also very expensive. The armabot one is great if you have large objects, but if the object is small like fuel, I see the armabot one as a waste of space that could be used for other mechanisms.

Here’s a little turret demo thing we made that illustrates how our 2019 turret bearing worked. 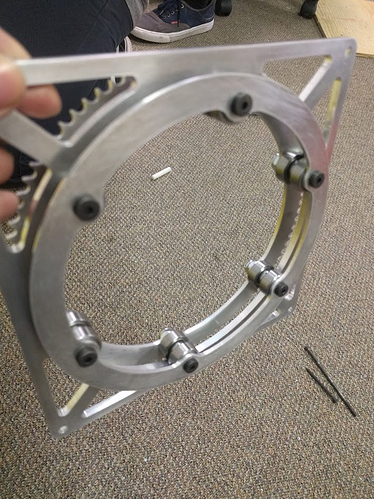 So the bearings in the middle are sandwiching the support. And then the bottom is a custom sprocket sandwiched by the top plate where you’d mount the mechanism I suppose a shooter.

Edit: Wait, 2019, what was it used for. It looks too small for a turreting elevator

Not a turreting elevator… a turreted elevator. They mounted hatch and cargo on opposite ends of an arm, mounted to their (sideways) elevator, and the arm could do a near 360 about a horizontal axis.

Watch some of 3647’s matches on TBA, it’ll show up pretty quickly.

Also, that’s a miniature demo piece, the real one is much larger.

Ah, I get it. But the concept still applies, it can still be used with a shooter with the hole in the middle as pass through for objects

Roller bearings have an effective CoF of about 0.001. Delrin (or equivalent slippery plastics) have a CoF on aluminum of around 0.2. That’s a significant increase in force needed to move the turret.

Not to toot our own horn, but check this out: https://youtu.be/ahPHh8D42fc
We were #1 seeded and won on Archimedes in 2016. We made it to Einstein.

Do you have any details on how the turret was designed?

How (if at all) did you account for thrust loads in this design? From the picture, I’m not seeing anything like a thrust bearing or more roller bearings mounted perpendicular.

Because the turret was vertical, most of the load was applied radially to the bearings. The only thrust loads would have been dynamic loading, or related to how far out the arm was cantilevered.

There would be constant cantilever due to the turret being vertical though, correct? So all of the weight of the arm would be applied in thrust.