Name: Kimberly O’Toole
Date Honored: 04-14-2006
Years involved w/FIRST: 10
FIRST Team(s): UTC Hamilton Sundstrand &, Suffield High School &, Windsor Locks High School (0176), Division by Zero - Clarkson SPEED Program &, Massena Central High School &, Salmon River High School (0229), Harris Corporation &, Penfield High School (1511)
Role: Team Leader
Quote: “Excellence - is the result of caring more than others think is wise, risking more than others think is safe, dreaming more than others think is practical, and expecting more than others think is possible.”
Bio: Kim O’Toole is a leader from Team #1511, and has got ten years of FIRST experience behind her. Working with three different teams throughout the years, her knowledge and drive have show through over time. She has quite a complicated job on her team: “I have the role of team leader, more so than ever on any of the FIRST teams I have been on. Officially I act as project manager/engineer. I manage the budget & schedule, I steer the team when they get off track, I help develop the leadership team, I coordinate activities, I make major decisions. Unofficially, I like to think I’m a friend and confidant for both my students and mentors. We are truly a family, and I feel its my responsibility to help both my students and mentors grow. I try and push them out of their comfort zones, make them try things they never thought they could, and help them truly learn the meaning of FIRST.”

Kim also had a few great memories to share. "I can’t choose just one… so I have to give two. My second year on 229, a HS freshman joined our team. He was quiet and fairly shy most of the year. We were still young, and hadn’t reached every student yet. It was the week of ship. We had a demonstration to give to the community, and our mechanical system was far from done. We finally finished and I had to jump in there to do the wiring. Since FIRST is about the HS students, I decided to try and get them involved. The freshman had been watching us, and I decided to ask him. I think I barely knew his name. So I sat down with him teaching him the different gauges, which ones went to speed controllers, what a PWM was, and on and on. We probably spent 4 hours wiring the robot together, but he picked it up quickly. I can still remember his parents coming to pick him up for hockey practice, and he actually came to me to ask if it was ok if he left! He was so excited, and really didn’t want to miss anything! The way he & I worked there and at competition was a flashback to my HS mentor, and it was just an amazing feeling to be in that position.

“My second is with 1511 last year. They worked so hard all year, often following my ideas and direction on blind faith. But I told them we were in a big pond, we couldn’t expect much… lets just go have fun, and don’t worry about the awards or winning. But at every single event last year, they made me cry. They were all happy tears. From our very first RAS and realizing we could go to championships, to the special M&M (Mir & Mirza) awards ceremony they did for all the mentors, giving me the special award, to winning the Toronto Regional & finally winning the Championship RAS. They were so amazing, so new, and so excited!”

Kim has been “first” in a lot of ways. She tipped us off to a few of her accomplishments over the years. “I was a founding student of 176, the founder of 229, and now the founder & team leader of 1511. When I left my high school team and was choosing colleges, I had to stay in FIRST, but not because of the robots. I felt that I owed it to the community, to the country, to my mentors, to take the time to inspire just one student, the way I had been inspired. But now I have so much more. My first year on 229, we placed ~48/50, but the kids loved it! I had students switching majors, transferring to Clarkson, wanting to explore engineering. It was a success! I had parents thanking me because “their student had never been so excited about something ever in their life.” It was an amazing feeling. So when I finally moved on to my job at Harris, I saw the chance to inspire more students, the chance to do more, and to really build “a dream team.” 1511 got it from the beginning, and continues to impress me. But the biggest accomplishment to me is the lives we have been able to change. I see how much these students have grown, and sometimes its scary how much they look to me, but then I look back at where each of them was a year or two ago, and its phenomenal the effort they have put in and the changes that have come over them.”

She also had a great description for people new to FIRST. “FIRST is an amazing chance to be involved in inspiring and building the future. FIRST not only inspires students in science and technology, it gives them confidence, leadership & real life exposure that will help them succeed no matter what they do. It gives many students the chance they may never have had otherwise. It gives the students who aren’t the A students or the great athletes a chance to shine, to show what they are made of!”

And finally, Kim gave some of her fellow FIRSTers some advice. “Give back & work hard & be a team. Whether its teaching someone about something technical, listening to them about life, being a friend, having fun, or picking them up when they fall down. FIRST is all about the relationships. Yeah you will learn plenty of technical stuff, but the way to change lives is to “care more than others think is wise.” Give it everything you’ve got!”

Congratulations to Kim O’Toole, our next Unsung FIRST Hero.

Congratulations to Kim O’Toole, our next Unsung FIRST Hero.

Kim congrats. It is great to see that you have won this award. You have inspired many students.

Thank you for everything that you do.

Congratulations Kim. You really have helped me within the pastfew weeks with you advise on how to expand my team. I hope to wrok with you on the Rukus this year. You really do observe this award.

OH no!!! Someone beat me to nominating you! :ahh:

I know from talking to members of 1511 that your dedication to FIRST and the students involved truly goes way beyond the six weeks in a way that ultimately defines the UFH title.

Congratulations to an honor that is more than well deserved.

Here’s to at least 10 more years of inspiration!

)
It was about time somebody paid their respect to “the prototype” ( although I was dead certain you were gonna be the Woodie Flowers winner this year eh, there is always next year. Jason will take it this year. GO ROCHESTER FIRST!).

This is really a well deserved honor for you Kim. I have seen first hand how your dedication goes way above the norm (even for FIRST people). I know how much your students respect you from 1st hand stories. You bring inspiration not only to your team, Rochester area but to all those that meet you. Congrats on UFH and continue on being the pillar of FIRST that you are.

Kim,
Congratulations! It is a great feeling when someone you know (even if only electronically) is recognized for a job well done. Your desire to give back to the community will reap rewards far beyond this UFH. Keep up the good work.

Congrats Kim! look at that April is the month of Rochester! Great to see yet another great candidate.

Congratulations Kim! You really do deserve this award. You are one of the greatest FIRSTers out there. Thanks for all you do!

Congratulations Kim! It’s great to have an awesome person like you honored here. I know the dedication you’ve put in through the years on all your teams and peer recognition is one of the greatest things to receive. Keep up the great work here in Rochester, we definitely need more people like you around with the drive and determination to make things happen. I’m glad that you’re part of the Rochester FIRST community and a friend of mine. Party on!

This is cool that someone nominated Kim for CD “Unsung Hero” award.

I’m an adult mentor on team 1511, Rolling Thunder from Harris Corp and Penfield High School. It’s our 2nd year as a FRC team, and we went all the way to win the championship rookie all-star award last year under “general” Kim’s command…

She’s been a true inspiration to each of the students and to us as mentors as well. We tee-ed up her name this year for Woodie Flowers, and yes, she definitely is a “WFA winner in the making” as FIRST has been so deeply ingrained in her lifestyle and rubs off on each of us every day in so many ways.

We chewed-off an awful lot of projects this past year, but everyone on the team stepped-up to the challenges including the 151 thunderbolt community service projects. Kim led us every step of the way.

Stop by the red-camo pit at the 2006 World Championships in Atlanta to congratulate Kim and see gracious professionalism in action. I’m the old guy in the red camouflage tux jacket with Woodie! 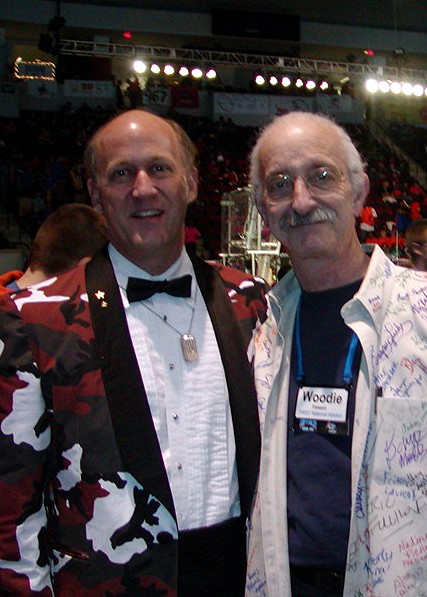 Congrats Kim, after I crashed your team meeting the other day with Jay I realized how good of a leader you are. You earned this one!

oh man…what to say about this one. Well back in 2004 Joe Ross came up to me and told me about this woman who worked at Harris who had alot of FIRST involvement. I remember vividly going into the career fair at RIT that year and trying to persuade the Harris employee doing interviews to give us her contact information. Well we didn’t get it but i finally met her before the 2005 season. Little did i know that this woman was going to change the face of Rochester FIRST forever. Beyond Kim’s obvious achievements on 1511, 229, and 176 she has truly impacted the FIRST community. As the driving force behind many different activities to bring Rochester together (rally, ruckus, etc) she has become an inspiration for not only the students on the team but many different teams and mentors, including myself. It would only be a slight exaggeration to say that if mentors involved with FIRST asked themselves “what would Kim do?” we would be able to accomplish about 100 times more with this organization.

Thanks for everything Kim.

congrats Kim,
My name is Mark Mascadri and i am one of her kids from 1511. I say kids because Kim has created a family. Kim does so much for this team, other teams, FIRST in general, and every one she meets along the way. Kim has personally influenced me and has helped me become a beater person and a better leader. I will always look up to Kim for inspiration and guidance.

Kim keep doing the things that you do, and being the person that you are.

I love u Kim