A low bot with a low angle shooter mechanism. It would score the initial 3 PCs in the low goal, then go immediately to the alliance’s load station and stay until the endgame. The HP would feed the high chute which would drop into the shooter. This would be set to “bounce” the PCs toward the low goal. Many would may be blocked, but the concept is that any goal scored by the apposing alliance would be transferred back to the “friendly” side of the field eliminating the need for the alliance to do full field cycles. Any PC that is not blocked and makes it into the low goal would be bonus.

Then, of course, hang.

PCs cannot be shot across the field. “Bounce” sounds ambiguous, and may trigger penalties.

PCs I think can be passed from one team to another, as long as the PC isn’t scored by the robot at the alliance station.

I like the idea of a bot that sits at the loading station and passed balls, but the shooting mechanism would need to be strong enough to propel it across the field. Otherwise, the balls would be blocked not go far enough, littering the opponent’s side of the field, the opposite of what you would want.

But if the shooting mechanism is strong enough to do cross-court passes, why not adjust the angle to be able to shoot into the high goal?

It’s one thing to have a shooter that can score high goal. It’s another to have it consistent and quickly though 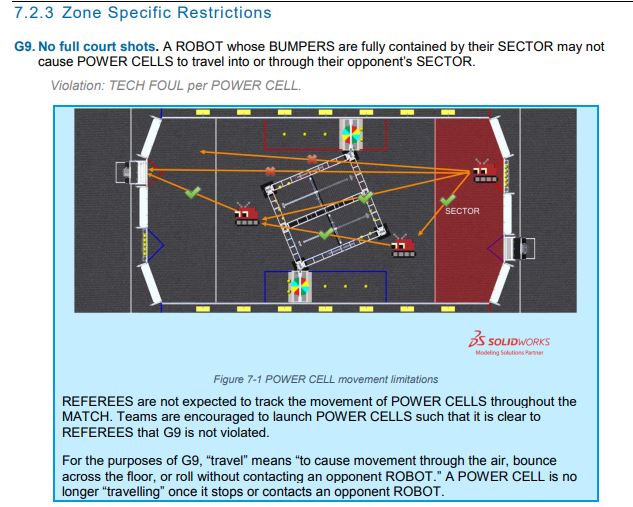 Travel into or through seems like that ball had better not find its way into the other sector until someone else stops it before it gets there or isn’t propelled hard enough to roll into the sector on its own.

OP’s initial concept is a flagrant violation of the rule.

Was in the process of posting this.
Either the robot at the loading station better leave their sector, or the PCs better not enter the other sector.

Just shoot them into your trench and if the opponent tries to take them, just bump them and get a tech foul

Sorry guys. For some reason I was stuck on thinking that G9 only applied to the initial flight of the PC. It looks like you are right.

This idea is plausible, you’ll just have to tune the kinetic energy of the power cell. It would definitely give a ‘cleanup’ bot some additional spots to grab balls from, and almost outright prevents the overflow strategy.

When parked against the loading station wall, tune the exit velocity so the ball cannot roll beyond the far sector line.