We had a new NEO motor fail with only a few minutes of heavy driving after being run on a robot. One of the windings completely burned up, but it’s not clear what started it. Taking the motor apart did reveal some possible manufacturing issues that could contribute to failures.

Hey Jack,
We need a bit more information from you to fully figure out why this specific motor failed. It is possible that this one had a manufacturing defect, but we want to make sure we understand the condition that it failed in.

Was your team running Smart Current limiting or any closed loop control on your motors? What is the gearbox configuration that these were in (number of motors in each, gear ratio, and approximate weight of robot).

I also wanted to address a couple of things from your photo gallery to help you (and others) what you are actually seeing during your tear down.

Also just for fun…here is a video of the winding process for NEO.

Don’t try that at home! Nice to see the manufacturing process.

I just toured a BLDC factory two weeks ago, and that is a really nice looking winding machine you guys have.

Is the epoxy curing vac chamber also heated? Heating the chamber might decrease the cure time and reduce the “settling” effect due to gravity. You could also rotate the stators while they cure, but that’s a good amount of capital to get the fixturing.

We were not using closed loop or any smart features in the firmware and we used the public void set​(double speed) method to set the output of the motor controllers. The Sparks were running firmware 1.0.65.

When looking at the current consumption of the this motor and the other motor in its gearbox as recorded by the PDP, they were both drawing similar average amounts of current, but there was a unusually large difference in the current draw between the motors at some times.

One thing that concerns me now is how easily that blue wire broke off of the hall sensor board. Looking back at the picture, the blue, black, and green wires, and possibly others, were just soldered to the top of the board instead of inserted through, so I’m wondering if this solder joint had already failed before I opened it. I didn’t put much stress on the wires when removing the board (I pried up the side across from the wires with a screwdriver) and none of the other solder joints broke.

To clarify my comment about the case coating, there appears to be a transparent lining or a thick layer of clearcoat inside of the outer case.

Another thing I noticed, it’s only really visible in the left side of this photo: 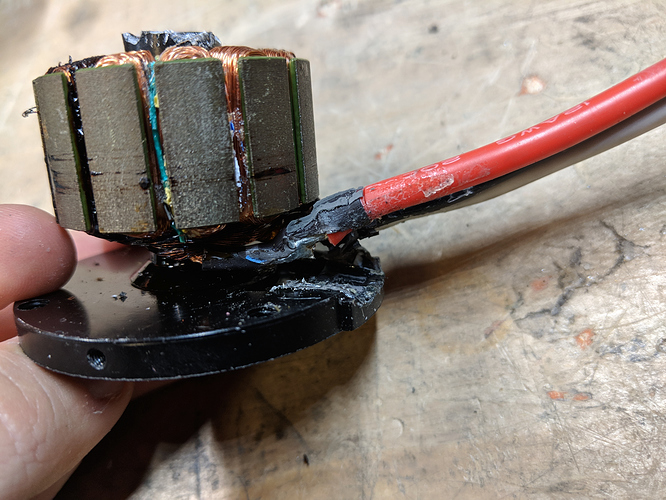 image.jpg4032×3024 5.94 MB
but one or two pieces of wire seemed to have separated from the top side of the stator on the burnt phase. They did not appear damaged and it was not clear if they came off in the process of removing the rotor or if they were like that beforehand.
system closed March 6, 2020, 11:57pm #6