Our team is looking to switch to two speed gearbox but it has to be compatible with the Andymark kitbot. The Evo’s are too long and the pneumatic shifter will get in the way of the other component of our robot. Is there a way to make is to so that the VEXpro 2 speed is compatible with the kitbot?
Thanks!

What’s your rationale for wanting this change?

Are you sure you evaluated the issues with your current drive thoroughly to reach this conclusion?

Yea, at least I think so. We want to be able to defend on the other side.

Do you know if the Vex can face mount to the kit bot?

To answer the question you asked: If you can mill more holes into your drive plates with reasonable amount of precision (0.005" location accuracy), pretty much any gearbox is compatible with the KitBot chassis. You just need to take the Vex drawings, find the mounting holes, and drill the same pattern on the kit chassis.

Also, look into pancake cylinders for shifting before you dismiss Evo.

But I like Akash’s line of questions. Here’s a follow-up: What makes you think you need a shifting gearbox to defend on the other side?

We were planning on having 2 speeds one to push and another to do fast cycles. As for the milling holes, we do not have the accurate way to and its after bag day so we cant.

At some point, you will be traction limited. What motors do you want to use, and how much current do you feel comfortably pushing with them at? At that gearing, what speed do you go, and how quickly does that get you from the rocket/cargo ship to the loading station? Is that driving time significant compared to the time it takes to align?

All questions you should ask before deciding to shift. For me, the question to shift has been a NO for many years.

How many chances have you had to practice driving?

On your first day at Los Angeles Regional, would you rather be tearing your robot apart to add an additional gear ratio, or passing inspection and participating in the maximum number of practice matches?

EDIT: And echoing apalrd, do you need to push to play good defense?

All questions you should ask before deciding to shift. For me, the question to shift has been a NO for many years.

Same. Every robot I’ve had a hand in from 2014 onward has been single-speed, because there’s just less need for the speeds. 6 Mini CIMs through a 3CIM4U at 7.31:1 served us great at Palmetto, and we will be highly inclined to use it again in future seasons. We arrived at the gear ratio using iLite’s drivetrain calculator, and estimating our sprint distance as 25 feet (which may be a little on the long side, but it was successful at being fastest to several shorter sprints too).

That said, also consider whether it’s worth the time ripping into your robot before your event. For most robots, drivetrain overhauls are not trivial matters. Could you get more benefit from getting inspected early and doing a lot of practice matches?

Please don’t do this, for your own sake. One of my biggest regrets from 2017 is our switch to 2 speed gearboxes, and that was week 4 of build. It’s not worth it.

They were pretty seriously tearing up the field at the local pre-bag scrimmage, BOTH days. I’d guesstimate that at the scrimmage alone they got a SMALL regional’s worth of driving per day (average) without factoring in any practice they did between then and robot-in-the-bag status.

They’ve definitely had some good practice, including both hatches and cargo. I think I know what mechanism the gearboxes would get in the way of–and trust me, you don’t want to get in the way of that one.

One of the best ways to play defense is simply to slow your opponent when they’re moving towards their intended location. This can be accomplished numerous ways, but one of the best ways is to simply park sideways in front of them and allow them to t-bone and slowly push you sideways. This orientation allows you to move laterally along with them in case they try to quickly move around you.

If you go with this strategy, a lower speed gearbox is far from your greatest source of improvement.

(All that being said, here’s an older guide to using VexPro components with the 2014 kit chassis: https://content.vexrobotics.com/vexpro/pdf/How-To-Use-VEXpro-Components-with-the-KOP-Drive-System.pdf)

We are not going to do it! We will switch to 3 minicim tho. Tanks for the tip. =)

Damn Eric you were right it did get in the way of that mech. nice memory! As for the gearbox, I think that the pneumatic wheels will be good enough for some extra support. and we will go for a fast bot and increase weight to use our momentum to lightly ram them and not try to win the pushing battle. 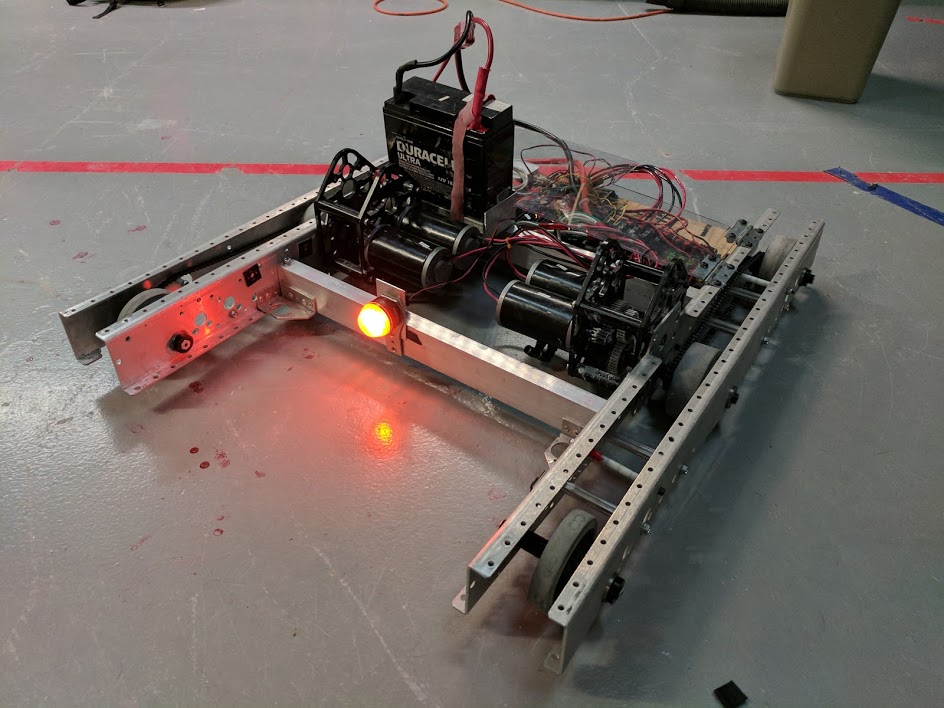 I know you already decided switch to 3 minicim, but I will leave this piece of jank here anyways.

You probably do not need 2 speeds. Maybe reduce the top speed you have in the single speed gearbox. Adding weight is also an easy to implement and simple way to add to your pushing power.

Next, being able to push an opponent away is helpful but is by no means necessary to play effective defense. I have found that it is better to just be where your opponents want to be before they get there and make them push you out of the way. This slows them down and makes scoring more difficult for them without needing anything new at all.

In games such as 2013, 2014, and 2017 shifting can be very useful as you have to cross the field for cycles often. For games like this year and last year the cycle ranges are very small distances and shifting is not gonna help all that much. I would recommend maybe changing your single speed gearbox to a ratio that is somewhere in the middle between speed and torque.

VEX Pro offers guides on how to mount their gear boxes to a kit bot. We use 3 CIM ball shifting gear boxes (2 CIMs can be used in these gear boxes too).

Not sure how relevant this is as it is for the 2014 kit bot and we haven’t used a kit bot in a couple of years.

We used 1 speed and played defense on 1678/3476 at Aerospace Valley we beat them in one match and were one of the 2 teams to beat 1678 (other was 1323). We realized that with a higher speed we can just ram them full speed and use that to stop them. We also stood sideways to prevent them from pushing us which is near impossible with a 130 pound(battery+ bumper) robot with 8" pneumatic wheel.