Hey everyone, this is my first post on Chief Delphi, hopefully this is in the right place to ask this question!

For the past year or so, I have been organizing and streaming tournaments for the video game Reassembly using an FRC regional-style ruleset. Cheesy Arena is very pretty looking; how can I repurpose it for Reassembly tournaments?

some context on Reassembly and my history hosting tournaments:
Reassembly is a small game with a small community that ive been playing for a long time. In tournaments, participants construct 2D spaceships out of geometric shapes.
Here’s a couple of examples: On the left we have Dark-Star [by Dukeslayer] and on the right we have Johanssen [by myself]: 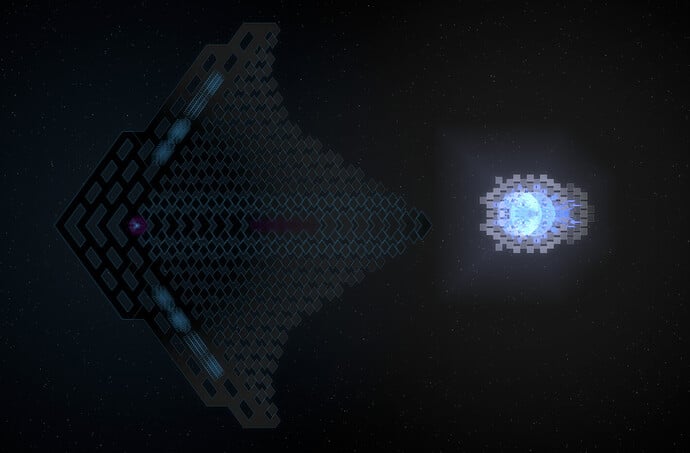 image1418×933 219 KB
They send these ships to the tournament host, who has the computer control the ships to fight each other. The interesting thing about the game is the ships are not human controlled: the goal is to design ships that the AI plays well.
There’s a massive variety of ships that can be built and it’s always very fun to see what others came up with.
Reassembly tournaments are tiny events that happen rarely; only 16 people sent ships to my last tournament; a relatively high amount by Reassembly standards! Generally, a single person writes the rules, checks the ships to make sure they are legal, and streams the tournament live. They are totally volunteer based; there’s no money involved whatsoever, its all just for fun.
Reassembly tournaments take a long time to execute: my last tournament had quals that took 5 hours and elims that took about 3, and this is not an especially long tournament.
I realized eventually that imposing an frc regional style ruleset would be extremely interesting: In most tournaments, participants fight one on one; in a regional format, its 3 participants vs 3 participants.
Ive been doing this for a while: I recently streamed Debris Regional Reassembly Tournament Five (abbreviated as DRRT 5).

Now for some setup details:
here’s the ruleset for last tournament. Contains links to the youtube channel where the tournament videos are stored: DRRT 5: 25–26 June 2021 - Google Docs
and here’s the spreadsheet I will refer to: DRRT 5 - Tournament Datasheet - Google Sheets
I use OBS to stream the tournament on twitch.
I generate the match schedule with the MatchMaker Scheduling Algorithm (linked in the rules document)
When the qualifications start, I process the scheduler’s output using a bash script and import it into a google sheet.
The google sheet has a list of all the participants’ ship names (not numbers!) and it automatically populates a Match Schedule tab (shows the match schedule) and a Ranking tab (shows the top ranked ships).
In OBS, I use a browser source to take these two tabs and put them in individual scenes to be shown on stream.
The Ranking sheet looks at formatting applied to the names in the Match Schedule tab to calculate the amount of ranking points each ship has. it sorts them according to their ranking score. note that this is input manually!
I have no FMS or anything remotely similar to that: scorekeepers look at the match and and enter match information into the sheet.

and the main question:
My tournaments are very similar to FRC regionals, and Cheesy Arena is a very pretty way of displaying match scores and rankings for regionals and offseason events. Is it possible to use Cheesy arena for my DRRTs, and would someone be willing to help me set it up for DRRT 6?

Any help would be appreciated!