Using multiple limelights at once

In the web interface under network settings you can set one of the limelight’s to use a different network table name.

Awesome, Thanks for the prompt response !

Edit:To clarify for anyone else, it is under “Host name”. Also, it might only be on the limelight 2 firmware, i’m not positive on that though!

ok interesting question, I am just starting to work with a Limelight and I have had some problems with it. I can’t seem to get vs Code to recognize it as a table… 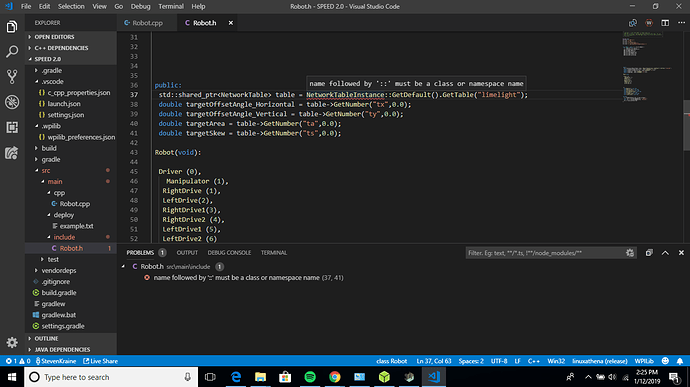 alrighty that worked thank you

Presumably, if you were only using the 2nd Limelight as an additional camera, no network table would be necessary?

The limelight will function as a second camera without any use of the network tables, you only need to use them if you want to track targets. Also, the USB port on the limelight allows you to plug in a USB Cam and stream that video as well.

I’m aware of the USB port, we’re playing with the idea of using up to 4 cameras, two limelights (its possible only one would do any actual targeting) and the rest for viewing (especially during the sandstorm). Given the video compression the limelights uses, it looks like it might be possible.

@cbale2000, I’d be interested to see what your bandwidth measurements as you explore that. They dropped the bandwidth limit down to 4mbs this year. So far, inspecting one feed from limelight (no USB extension) students measured around 2.0mbs (method: Wireshark on the client computer).

With this strategy, I strongly suspect you would still need to rename one of the limelight’s – otherwise they will both reading/writing to the same NetworkTable variables. Data from each would probably be interlaced (assuming limelight still sends data in when camMode is set to driver) and any runtime changes you send to the your vision limelight (e.g. which pipeline what camMode to use) would probably be picked up by both.

Oh, wow, wasn’t aware of the new lower bandwidth. I know it would likely have worked under the old limit, but now I’ll have to check. =/

Yeah… it adds a complication to be sure

They reduced it in anticipation of all teams on the field using vision feeds this year.

If our initial bandwidth measurements prove accurate, multiple streams will require some creativity to remain viable. Good luck to you!

Seems about time they upgrade us to AC wireless if you ask me (or separate out the control wireless to a different band and leave the video feedback wireless on a WiFi bandwidth free-for-all). 4Mbps in 2019 seems a bit absurd, even if it is shared between 6 devices (plus accounting for interference in the venue).

By normal conventions, it does seem very limited… but not as limited as my knowledge of the FMS!

Of course, the constraints just add to the challenge… Just means we need to do a bit of thinking around corners.

I doubt they imposed the limits as part of the challenge, more likely they’re expecting it will be necessary to limit it in order to prevent network drop-outs due to interference or sub-par network equipment, as a result of basically forcing so much video use in this years game.

I still think the most logical thing they could do would be to put all the control system coms on a completely separate type of dedicated interface (like an XBee or some other hobbyist radio communication that operates far outside the 5Ghz range), and then let all the “extra stuff” like live video just run over a standard WiFi network, and whatever bandwidth you get is what you get. Hopefully they’ll move in this direction eventually.

Hey quick question, we’re trying to get the backup camera to work and we are not receiving the second feed. We are only receiving the main Limelight camera feed, and we are expecting to see the Microsoft Lifecam feed that we have plugged into the USB of the Limelight. We have tried setting the camMode and stream to no avail, and all the documentation makes it seem that it shouldn’t be more complicated then that. Love the product so far and we appreciate the support.

Open up your browser and go to limelight.local:5800. This will pull up the video stream, but won’t have the web interface.

Still only seeing the Limelight feed on 5800. Will have to try again on Tuesday with either code fixes or maybe trying another camera.

How did you connect them together into one ethernet port? Did you use a switch or something along those lines.

Yes, an Ethernet switch would be needed. See Small networking switch needed for eboard? for recommendations.