Team 6800 Valor is proud to release our cad for the 2021-2022 season. Diablo was by far our most successful robot yet and we’re excited to share this with the community!
Please feel free to ask any questions related to the robot/CAD in this thread and we will try our best to answer any questions you have!

Link to the CAD in Onshape: Onshape

Love the Cad, it was great playing with you guys on the field in Houston!

how does the intake deploy? 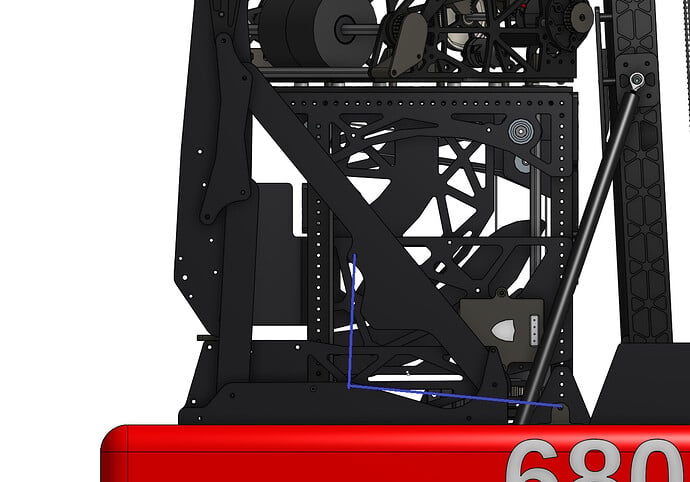 the blue line represents a taught surgical tube line that is fully tensioned with the vertical intake state. because the frontmost linkage is in a vertical position, the intake is in a kind of “equilibrium”, and is further held by the friction between the bottom versaroller and the ball shelf. 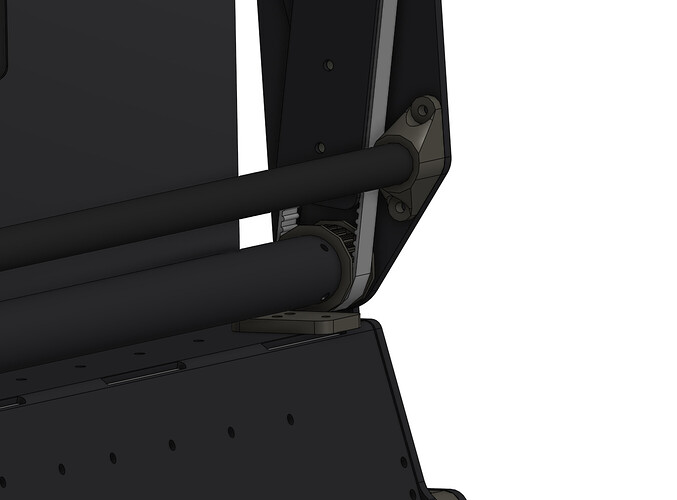 the plate mounted on the ball shelf has black tread material that compresses with its contact into the versaroller. When the match begins, the intake spins and rolls over the tread plate, where the tension of the surgical tube can now act on the back linkage and release the intake the rest of the way. We got this question all year, so I hope this in-depth response helps!

Great looking robot, but I can’t see a thing in that OnShape model. Maybe next time model the parts in a dark grey, rather than black

This is a super amazing robot, and it was great to get to watch it in person at worlds. One question that I have is that while at worlds one of the Mentors on my team talked to someone on your team, and they mentioned that you mount your swerve modules under the 2x1 as opposed to on top like most teams. I noticed this again in the CAD, so I was just curious why you do this?

What was the reasoning for using the l4 ratio on the sds modules?

What is the second limelight on the right of the bot for?

Valor chose the L4 ratio during the build season, placing a priority to be a fast, maneuverable robot on the court. We had gone through pre-season testing swerve on an L2 configuration, and that simply wasn’t going to cut it for our demands.

Sadly, the L3’s were out of stock, but we were aware that our robot would be small and light enough to handle the L4, to which we then switched to the L4.

Unfortunately, we didn’t have the opportunity to take advantage of the 2nd limelight for champs, but the camera would have been used to live display cargo behind the hub that our drivers couldn’t see.

There are a couple of factors that went into this decision. Knowing we wanted to create a full-width intake, having the modules under the 2x1 would make the cargo shelf shorter in height, ultimately lowering the entirety of our ball path structure. This works to keep cg lower, and the added “ride height” allowed for our battery box and climber gearbox to nicely stay above the terrain with ample room underneath for underside electronics.

I was looking at your CAD and one thing that stood out to me was the long vertical hex shaft powering your turret. Could you explain how that design choice was made? I also noted that the initial reduction used was decently simple for a belt-then-gear reduction, so I’m wondering about that too.

I’m quite impressed how your turret gears mesh and rotate together in the CAD – something I was too lazy to do haha.

The idea behind the long vertical hex shaft for the turret was that we could mount the motor lower on our robot and keep the CG as low as possible. However, mounting our motor lower meant we had limited space for the gearbox, and the easiest way to fit the reduction we wanted was with the belt and gear reduction.

I thought you were exaggerating but it’s true - my old eyes can barely make out the fun stuff. Downloading a parasolid and recoloring seems to be the way to go! 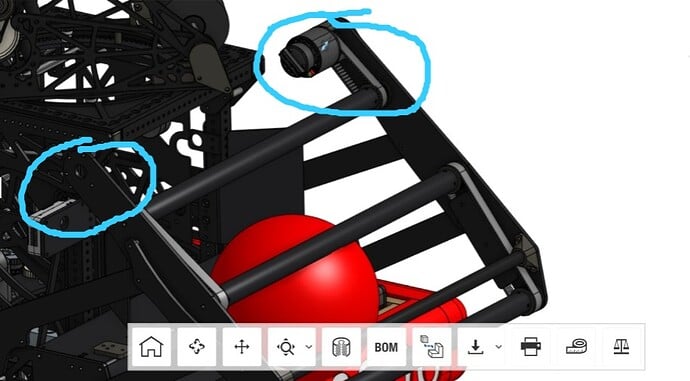 I love all your job around the robot of this year, however I did not have the oportunity to see it in person. I have just one question about the design, why you reutilize the same design of the plates of some mechanisms even if you dont use it for the same purpose? It is to mantain the most simple way the design? to mantain the simmetry? (For example the intake plates and the shooter plates)

I hope your answer. Thank you guys!!!

Great question! We copied the same design for both arms for the sake of simplicity as the same part could be cut on the router and either arm could be installed on either side of the intake. Regarding symmetry, it can look good for aesthetics in some situations, or for maintaining weight distribution. For the two arms, however, it was mostly to keep the design simple and not create unnecessary parts.

Would you guys be willing to release your kinematics for this year? Would love to see your approach to finding your climber geometry and ball geometry through a turret. Thanks!

What were your considerations for not closing the intake? It seems risky because it can be damaged and damage other robots.
Were there any occasions where the intake broke? If there were, what was the damage and how did you manage?
Anyway I really like the aesthetic of your robot! Keep it up.

The passively deployable intake kept things simple, and our initial analysis of the game was that any rough play with a compliant intake would be negligible, and wouldn’t risk damaging a deployment system. including the extra deploying system was seen as an additional failure point that would in turn potentially cost us RPs. However, the inability to retract did cost us some minor penalty points going through our district events but were eased up with judges being more understanding of who initiates contact in later events.

Keeping compliance as a number one priority in the design, almost the entire intake structure is comprised of polycarbonate sheets, placing an emphasis on bending, not breaking. the body is held nicely with dead axle shafts spanning the intake, and the non-parallel four bars are made of wide polycarbonate sheets. This entire design was made in the best efforts to handle extreme load cases from the side and front bashes, to which it held up very nicely (watch our robot reveal where we full-speed bash into the wall).

Being on the pit crew, we knew as a team to come prepared for the worst. For every event, we had brought an entire backup intake, as well as a couple of spare rollers, and printed pulleys, for any severe cases. As for actual damages, we had 1 linkage break, 1 side plate snap, a couple of surgical tube snaps, and 1 busted motor.

If you have any specific questions we’d be happy to help, as for a “kinematic release,” we likely won’t be making one.

How did yall go about attaching the ball joint rod ends to the .75 OD round tubing? Did you end up using a left-hand & right-hand threaded rod ends to be able to increase the tension on .75 OD tubes? What benefits did you see using tie rods rather than square tubing and gussets.
I’m creating a subsystem that uses tie-rods as well, and have a solution to attach the ball joint rod ends to the round tubing by machining some aluminum tube plugs and press fitting right-hand & left-hand nuts onto them, but I’m curious to know how yall attached the rod ends.

This was an amazing robot to watch at Texas state champs and World champs, and I had a fun time digging through the cad. Thank you for providing this resource!!

Yes! we used left and right-hand threads so the whole tie rod can be tightened or loosened in the same direction. Originally it was proposed to use .75" OD round tube, but we had settled to use 1/2" hex stock for its rigidity, as well as providing the ability to tighten the rod with a wrench. we found that this method of supporting the lift would be far more effective and lighter than a large box tube structure, as it exists to distribute the load of the lift towards the center of the drive base.