OK so heres what happened…we designed and built our arm going by the specs FIRST gave us on the Taigene Van door motor and it was supposed to run at a free speed of 75 RPMs but once we hooked the arm up and tested it for the first time it was going really slow. so we made a mark on the motor shaft and timed it and it only was running at 50 RPMs under no load…has anyone else had this problem? or if anyone has a comment on this? we are kind of stumped

p.s. we tested one of the previous years van door motors and it ran at almost 80 RPMs.

how confident are you about your electrical connections? resistance will affect a bit. and how full were your batteries?

the batteries were fully charged…12.7 under load…and it was connected right to the battery soo there wasn’t any resistance

If you have it hooked up into a drivetrain of some sort, there is no way it should be running at free speed even if there is no load on the arm, slider, winch, whatever. Chains, gears, shafts create friction that will slow it down when you think its under “no load”

so we made a mark on the motor shaft and timed it and it only was running at 50 RPMs under no load…has anyone else had this problem? or if anyone has a comment on this? we are kind of stumped

p.s. we tested one of the previous years van door motors and it ran at almost 80 RPMs.

Can someone just duplicate this test on a new Taigene and post your results here?
OR
Is there a known fault in the no load speed on the Taigene spec sheet??

K,
Since it is a new motor, the lubricant hasn’t really had a chance to distribute itself inside the case. Run it for a while and I think you will find it will speed up. Due to the odd shape of this motor, they are often dropped or set down hard on the shaft (threaded end) which causes a bent shaft or a crack on the back side of the gearbox, this could cause misalignment of the gears and results in slow free speed. If you find a small crack, there is no coming back from this failure and it will only get worse with time.

188 tested the van door’s free speed, and also got around 50 rpm. We didn’t run it long enough for any significant wear on the worm gear or lubricant redistribution to take place. Older van door motors did indeed perform differently, but like Al said, it might be due to being a brand new motor, not yet broken in.

Maybe someone could lightly load a motor (known to run at 50 rpm) for a half-hour, and then re-measure the free speed, to see if any change took place.

its worth a try i guess

if anyone else has had the slow motor problem please post…

[edit]
I looked up the history of the Taigene spec.
See this thread http://www.chiefdelphi.com/forums/showthread.php?t=32796&highlight=taigene
In particular Joe Johnson’s posts on the revised Taigene specs.

Ok, lets say that the speed of the motors doesn’t get better, what would this mean? Are the specs wrong? or is there a problem with the motor? would they be less reliable?

Ok, lets say that the speed of the motors doesn’t get better, what would this mean? Are the specs wrong? or is there a problem with the motor? would they be less reliable?

Specs would be wrong. The results have been duplicated (or I suppose, the whole batch donated to FIRST could be defective, but that seems unlikely).

okie… some work was required in finding this out (not really) but its ok. its all for you guys.

The old motors are 75 rpm. The new ones look the same. And have a free rpm of 50. Life sucks. But… the good part is that they have the same power. Torque is greater in the new motor, they equal out to roughly the same power. So… all it does is force all you people using it to redesign. Great…

so they didnt edit the spec then is what your saying? thats great… :ahh:

People are starting to panic because it is week 5 now and such motor problems are not appreciated. Anyway. On to the point.

I have been looking around all over the place to find accurate van door specs. I have not found any. All of them are still the same old ones. Which are very wrong. The information in my first post is correct, it was actually measured. However, all we measured was theoretical power and free speed. So… has anyone measured the actual stall torque, max efficiency, etc? I have lost my confidence in spec sheets.

I asked a question about this on the FIRST Q&A System and it was deleted… who knows what FIRST is doing.

So does anyone have the stall torque numbers for the new vandoor? Without it, there is no equation, and without the equation there is no redesign…

Apparently… :sigh: I have found something that opens an even more frustrating question to this problem.

[left]This irritates me. Did we get the wrong motor? Are the spec sheets on the FIRST website the wrong one?[/left]

[left]Can someone else post as to what number their motor says.[/left]

[left]And, to add to this, I personally checked the voltage at the connection of the Van Door and it was around 12v.[/left]

edit: Overall pic of the thumbnail below is found here.
http://www.team237.com/gallery/Build-Season-2005/PDR_2250_Medium 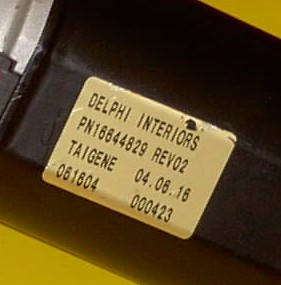