The school facility we’re using is new this year, and we have access to a new OMAX waterjet. We’ve been using it to cut various things, including polycarb intake plates that have small holes. The CTE lead who is overseeing the cutting so far has said he believes the small holes in the polycarb float and cause the nozzle to clog (back up with garnett maybe?). Anyway, I’m curious if this is a known problem & if there are known solutions to avoid the clogging. Flood the table to get water above the plastic maybe? I was thinking of proposing just poking holes at center locations with the waterjet and then having students drill them out, but that will take more time, of which we are short.

We’re also cutting one part at a time despite having large sheets of material, because of clamping challenges with floppy material as cuts are made. Any tips and tricks in that area are also appreciated. Thanks!

166 has been getting water jetted polycarbonate parts for years from a sponsor. To our knowledge there has never been an issue.

My question to you is, how small are these holes. The smallest we do is clearance for 10-32

Much depends on the machine. There were cut by a sponsor, on a good machine. 4-40 close fit holes (0.116") were no problem, there isn’t even any visible splaying on the surface from when the jet is first punching through the material. The nozzles are streaming at very high pressure, so I’d be pretty surprised if anything managed to make it’s way back into the nozzles, let alone clog them. But, I really don’t know, except that I’ve never heard of this being an issue. 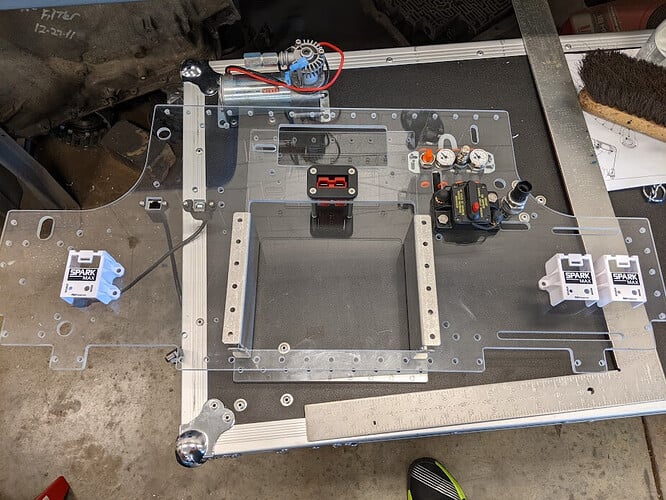 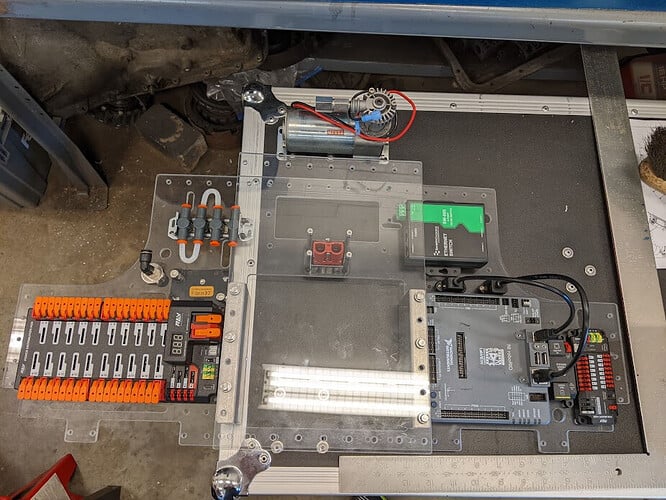 (Also, the small footprint of the REV control system stuff is nice. Pretty much, the entire guts of our robot fit below the deck in only part of the drivebase, even with swerve modules in this same plane.)

We never had an issue with cut materials clogging the nozzle. For polycarb, we dropped the water level below the material so the cut pieces wouldn’t float and interfere with the travel of the head.
Not quite sure I am understanding the description of the issue with floppy material but we did usually weigh down thinner polycarb instead of clamping. Brake rotors, rusty weights from a home gym…

how small are these holes

Yea I wouldn’t be too concerned. I like what both Trevor and Nuttle said as well.

It sounds like the cte lead needs to adjust the water level… my OMAX memories are seven years old at this point but I didn’t have issues with similar size features and cutting all of my parts in one pass in college.

Yup no need for a polycarb part to be submerged.

We tried it again tonight, and indeed the nozzle clogs on the 10-32 holes. No problem with holes larger than that (even 1/4), but multiple times with the 10-32. So we’re going to contact OMAX to ask what they recommend. We did lower the water level below the sheet tonight. So a couple of our intake parts are aluminum for the time being because the problem doesn’t occur with that material, and we needed to make quick progress for assembly and testing. Thanks all.

The nozzle is clogged because it is too close to the material. Make sure you run the polycarb out of the water so it doesn’t float into the nozzle. Also, try to find the high spot on your polycarb sheet and touch off at the high spot. In addition to that if you want to play it safe, raise the nozzle about 1/8" and tell the machine that your material is an 1/8" thicker than it actually is. It will take a little longer and use a little more garnet but the nozzle should not clog.

Do you think that CNC router is good choice to machine polycarboante sheet? We are using it now.

We routinely cut polycarbonate on our ShopBot at our school. Handles it easily.

Couple questions for anyone familiar with waterjets and CNC routers:

I’m considering asking the school rep/coach to consider adding an Omio or similar, based on the experience with the waterjet so far. It’s been a great tool that contributed a lot to the robot this year, but it’s not that fast to make lots of parts because of having limited certified people to run the machine. Thanks.

Would a small CNC router perhaps be easier to work with for cutting polycarb (& focus the waterjet more on sheet metal)?

This is how our team does our in house machining. Our Omio runs any 1/8" or 1/4" polycarbonate pieces we may have and our waterjet does 1/8" and 1/4" aluminum plate. We have a Wazer, and it handles the aluminum like a champ. We have yet to run polycarbonate on it because we have the Omio. With how inexpensive the Omio is, I would highly recommend purchasing one and running the setup your proposed.

I cut all our polycarb on my X-carve. No need for a big expensive router.

The school just got a grant for a nice new router though so we will more than likely switch to that.

You can know more information about cutting polycarbonate.