We Should Play for 3rd Place

TL;DR Field timeouts are boring, play matches instead, give 3rd (and 4th) place a chance at wildcards.

In the WOW Championship (our local offseason tri-state championship) the two losing semifinalist alliances play each other for 3rd place. The matches take place between the finals matches in place of the field timeout (so it’s less boring for the audience). If the 3rd-place matches require a tie-breaker match, they call a field timeout and play back-to-back so that the finals match is always the last match (even if it’s only 2 matches). That’s a little clunky, but it’s good to have the finals match last.

I think they should use the same format for regionals (possibly districts too, but the reasons are stronger for regionals). This was discussed in this thread, but it’s closed now so I can’t add my thoughts to it. Plus, there is another reason why I think it’s more important now than it was when that thread was started.

The main reason I think it’s important is that it is relatively frequent (usually in later weeks) that 3/6 teams in the finals matches are already qualified for championships. That means that the automatic wildcard (for regionals) is wasted and that championship slot ends up going to a waitlist team (I assume). That also ignores any additional wildcards created because of the rookie all-star, EI, or chairman’s award winners.

Playing for 3rd place would allow the wildcard chain to stretch to an additional 6 teams (plus backups) and so would be able to reward a larger number of competitive robots at an event. This is more important now that the automatic wildcard exists.

The timeouts between finals matches are so incredibly boring. I like Cotton-Eyed Joe as much as the next person (that is to say, not at all

), but I would much rather watch robots. In addition, the event costs too much for attending teams to waste a perfectly good opportunity to play more matches. The extra field time that the finals represents affords a huge advantage to those teams in the form of additional drive team experience. It would be nice to give more teams that extra field time.

As an “always a semifinalist” team, I 100% support this idea.

I actually like this idea. Has it been brought up before?

I like Cotton-Eyed Joe as much as the next person (that is to say, not at all

Speak for yourself haha

As semifinalists last years, it is disappointing not knowing how you stack up against the other semifinalists

As I mentioned, it was suggested in that thread from 8 years ago, but AFAIK it’s never been considered in any kind of official capacity.

Sometimes (like last year), the WOW 3rd place alliance is decided in a single match, played between F1 and F2. Not a huge fan of that, but if the event is running behind, it’s something that can easily be cut or reduced.

Do you suggest that there would be any point value associated with this if it were to go into districts or would it just be extra matches to play?

I actually like this idea. Has it been brought up before?

i’ve wondered about this for the past couple of years. there’s a champion, and a finalist but the two semifinalists that lose seem to share a joint 3rd place. why doesn’t FIRST use the dead time during the guaranteed 10 minutes in between the finals matches to determine a 3rd place alliance?

Should FIRST change the playoff structure to this? General Forum

Another answer that most other sports have used (see: soccer) is taking the two alliances that lost in semis and playing for 3rd place. This would let us distinguish to whom to give the extra wildcard slots.

Why does FIRST burn wildcards at regionals? General Forum

I’ll reserve judgement on the round-robin tournament structure for Einstein until I see it. There’s potential for it to be boring, if two alliances clearly dominate after the first couple of matches… but there’s also potential for it to be very exciting if the alliances are mostly evenly matched, or there’s a question of alliances changing strategy depending on who they’re facing. One thing’s for sure - scouting other divisions is going to be somewhat important. Previously, you could scout th…

FIRST seems pretty not for this, despite continued pushing from the community.

I’d really like to see playoffs as a single match, double elimination format (maybe make the finals bo3) instead of the single elimination bo3 format we have currently. 3rd and 4th places are automatically found in that system, and it solves some other issues with the current system such as 8th seeds often not getting a solid chance to prove their merit.

I think there should be, to provide further gradation in point scores based on competition performance. I’m not sure how points would need to be awarded though, my team isn’t in a district (yet, come on WOW!).

Do you think that 1-match rounds would cause problems with better alliances losing to worse alliances because of circumstances outside their control?

This will increase the variance in any individual match, but you still have to lose 2 separate matches to get knocked out and if you advance far enough can get the loser’s bracket rematch against that team

This makse SOOOO much sense. You’ve got to give the finalists time between F1 and F2 anyways. Why not run a single match (not B03) for third. It’s too easy, and it makes too much sense.

Double elimination would be cool, too. I, however, like how strategy can change when playing the same teams in back-to-back matches. If you get beat by a significant margin, you’ve got to try something different. I understand you could still do this in double elimination, but it’s not the same.

I’d really like to see playoffs as a single match, double elimination format (maybe make the finals bo3) instead of the single elimination bo3 format we have currently. 3rd and 4th places are automatically found in that system, and it solves some other issues with the current system such as 8th seeds often not getting a solid chance to prove their merit.

This is the part where I lament that I cannot post the pictures of the old FRC double elimination brackets from the 90s, since they were lost in the CD migration and the Technokats history project page won’t load.

I found this one last summer looking through old stuff for our 25th anniversary. 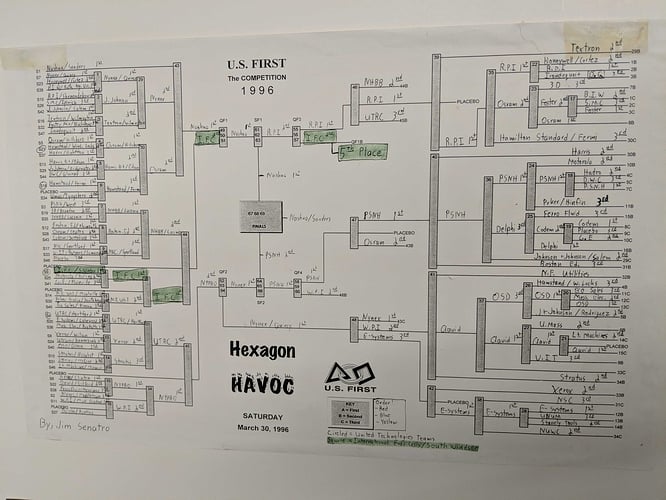 I’m not opposed to the idea of a 3rd-place match (particularly in a best-of-one format).

However, I have to imagine HQ did the wildcard math expecting a certain percentage of them to get burned in later weeks. Maybe it would work out to enable the third-place alliance to punch a ticket, but I don’t think that should be an automatic assumption without a peek at how they determine the current wild card availability.

Search terms: “Bracket of DOOM”. @Andy_Grady did a series on stuff from the Dark Ages of FRC, and several brackets cropped up.

Orion, I completely agree with your idea. I’ve seen far too many good robots lose in semis at regionals over the years, mostly due to getting boxed out of the top 2 of 3 “best robots” that form on the #1 seed. However,

Playing for 3rd place would allow the wildcard chain to stretch to an additional 6 teams (plus backups) and so would be able to reward a larger number of competitive robots at an event. This is more important now that the automatic wildcard exists.

In my (very) jaded opinion, it doesn’t seem that FIRST cares about making sure that competitive robots are at the championship. It’s not a championship. It’s a sponsor expo. I wish I could see things differently, but the fact that so many amazing teams have been failed by the regional qualification system (2175 2019, 3624 2017, 1796 2017, 179 2015, 624 2013 to name just a few, let alone however many there have been in California) and still nothing has changed.

Champs is a monumental experience for students. I have seen it change the lives of many students. It certainly would have changed mine if we had squeezed out a few more points here, or a few more points there, or if we just hadn’t broken in that one match. This is the primary reason I endorse the district model.

I have a question about a potential 3rd/4th place set of matches.

At this point, there is a possibility that the championship has been decided.
Celebration ensues … and so on … and so on …
Do we continue to execute the runner-up match sets?

The diabolical case is the championship series decided in two matches, and the runner-up matches stretch to three.

As much as I understand the desire, I just don’t think that this is the end to a weekend competition that we want to see.

The first 3rd/4th place match would play first. As someone mentioned previously, last year WOW did a BO1 (best-of-one) match between F1 and F2. They have done BO3 in the past though.

However, in the worst-case scenario:

It’s very clunky when 3rd/4th goes to three matches, but BO1 is a terrible option if it’s single-elimination with potential championships slots on the line.