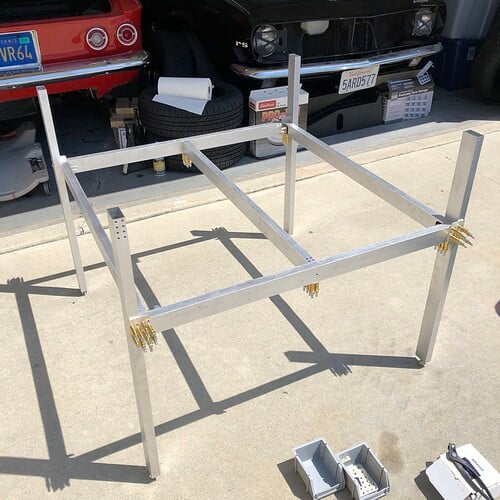 First meeting of our “new veteran” team inside of our permanent workspace. We don’t have much stuff, yet (read: anything useful for FRC aside from a 2016 kitbot) but we are incredibly happy with our location and potential.

We are super excited to be in our new workspace starting today! Just getting ready for some upcoming outreach events and moving our (extremely) modest robotics team possessions in today, but we are hyped about what the future will bring.
5 Likes
cglrcng September 7, 2021, 3:26pm #23

I spent the last few days researching a 40 yr. Old mystery. And think I may have stumbled on the solution. The problem is, I am in Nortwest, AZ, and the subject proof (actually buried treasure worth at least $1,000.00 in the form of a rare gem…in 1980 dollar value, plus 15 mins of fame to an adventurous soul or group of souls), may be (more than just a possibility), located in Hermann Park, Houston, TX.

Now I am looking for someone who is very adventurous (from the Houston, TX area), who is willing and can put eyes on the ground at a specific spot (I can direct them within 1 meter of I believe now), and willing to communicate outside of this forum via phone, text, email, etc and confirm many point of view, landmarks, etc., that can be seen from ground level.

If everything verifies out…We could then determine the next move. It has to do with a book written by Byron Priess…The Secret (a treasure hunt), who buried 12 Casque’s in lexan boxes, each containing a hand painted key to be exchanged for a single gem each, throughout the US/Canada in the late 70’s early 80’s. 3 have so far been found. 9 remain 40 years later.

If in Houston, and have the time and a bit of curiosity and are an adventurous soul, PM me please. I would like nothing more than to have a fellow roboticist claim the fame, as most of the original work was done by others that got me to what I firmly believe is very close, then with a little more work and a lot of research, figured out that others before me followed an easter egg (the mini-train in the park), and I back tracked and simply stumbled upon the solution. At least so far…To the Houston casque.

People have been making the searches too difficult, trying much too hard. As technology in 1980 was not like it is in 2021. Researching recently, after the 3rd discovery in Boston, MA, and reverse engineering, so to speak, how they discovered those 3, has made finding others much easier.

Each casque has an image and a corresponding verse, both contain the clues.

If I am correct, Simply Standing in the spot I can direct you to, with the image in hand and looking around in all directions, many items in the image should align easily with landmarks that still exist 40 years later, and the locations of items we already know existed 40 years ago, long removed / or since moved to different locations.

1 caveat: Please, I caution ALL, DO NOT go tearing up or digging illegally in a public park based on the above info, you could be ticketed, arrested or worse. I promise you I would not direct or suggest anyone tear up public or private property. (If it is where I think it is, legality to retrieve it, will be self explanatory).

PLEASE keep us posted on this

If I can find an adventurous soul in Houston, and things match up to the image. There just may be a slight possibility that a certain Discovery Channel TV personality and archeologist may wish to join the hunt as he did on the Boston casque in 2019. I sent a contact notification to him last night. Awaiting a reply now.

That is how certain I feel about the solution, and about legal recoverability.

Why does this read like a Nigerian oil prince email scam?

It certainly sounds intriguing if the story holds true.

It sounds a little crazy, but “The Secret” treasure hunt is a real thing: The Secret (treasure hunt) - Wikipedia

If only I were a prince…It is real, and I am dying to find out if my info verifies out. The actual prize for cache recovered is a mere $1K gem (1980 value), and 15 mins of fame. Great for a local if one has time, and hardly any expeditures in, not as great if like myself It would cost a bunch to get there, verify the info matches by sightline, then recover, deliver the key, collect the loot. It would cost me a lot more than time.

But, I would not mind a local in this trusted community claiming the prize. I have worked well with a few certain NASA based people in Houston over time in LV, NV.

I was so late to the party, that I do not own the book, and am told that it is available in every Good Will store across the country for about 50 cents. The info is available online, and that helps since you get to use others pre-work.

Just an update, someone from Houston who lives close to the location, has agreed to help. Later if they wish to unmask themselves after we collaborate they may. In the meantime, I will not unmask them yet without them doing so.

I will so appreciate having eyes, and feet on the ground checking my work so far and communicating what they see. Wish us both good luck! (The suspense is killing me!)

After they contacted me yesterday, I took a near complete 12 hour Google Street View walk throughout the entire area in question, and was able to get no closer than 20-30 feet from my intended target area. (I could see it, but i could not walk up to and stare down at it - except from space, not at ground level).

Oh my, 40 years of tree growth throughout the landscape has certainly changed a lot without any doubt. And you cannot bend down, or jump up using google street view to look under or over or through the canopy of wooded areas, so eyes onsite is an absolute must.

The 2 of us working together may accomplish the task using the technology available today.