Saw this and thought some teams that weld their robot frames might want to check it out. 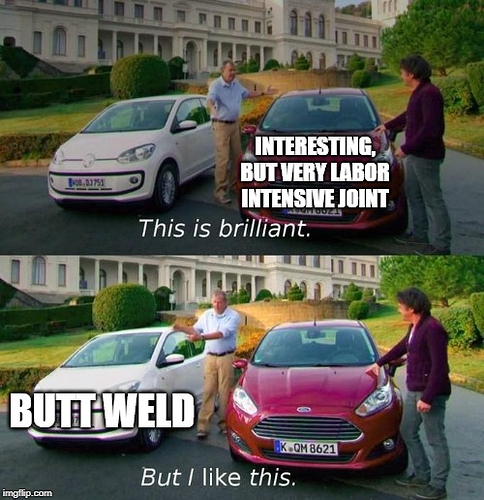 I would just like to point out that this video comes from the same channel that posted a video of making a stick welder out of a bicycle handle and a drill chuck titled “AMAZING! Top 3 Bright Ideas with Bicycle Hub and Drill!” Not to mention that they had to use a stick welder to weld parts for this project, implying that they already had access to a stick welder with a much lower chance of death or maiming.

I don’t know how much I trust their welding knowledge, and I feel like a butt joint weld is probably equally as (or more) secure lmao.

I think it’s a neat way to make a corner. I don’t see much application for it in FRC…but you never know.

The joint would look really nice if it were TIG welded, instead of stick welded and ground.

The round you get is fun, but I was thinking it was neat because you get a substantial about of material that goes around the corner with out being subject to welding temperatures. That lets you maintain the temper of the material. I remember our 1717 2012 robot had cracks forming in many of the weld joints by the end of the season.

We made two robots with steel frames, they were MIG welded, and held up just fine. We also had an aluminum part on last year’s robot that I TIG welded, and it didn’t fare very well. But we do understand the problems with the design, and in future would do things a bit differently.

The real problem with doing this for a frame is that you’re putting the aluminum bent around the corner under a lot of stress as you bend it. It is also subjected to welding temps, just as much as any of the surrounding metal on a butt joint. I too am dubious that it would be as good structurally, but it is a cool trick for something that is more decorative than structural.

I agree that bending 6061-t6 doesn’t work well, maybe on an arc that large it might do alright. For the heat affected zone, I don’t think it goes as far as you think. The temps drop off fairly quickly with distance. 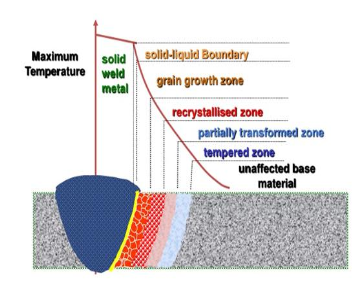 I like your heat affected zone image, but I have a feeling it’s for steel, not aluminum…and there is a huge difference

It’s probably a stock / textbook picture, but I did find it in this study:

I wonder how many teams MIG weld aluminum components? I expect TIG is more common.

We’ll actually be MIG welding aluminum components this year, since we just got a brand new welder to do it. We’ve welded steel components for a few years now with a basic flux-core welder, but we finally sprang for a proper MIG setup with a spool gun. We expect to use it on our PC mechanism and probably some of the other components as well. We won’t be welding the frame this year, but may well in future years.

Ha! I knew exactly what this link was upon reading “mill your entire”. I glad this tread was referenced at least once this season.
.
.
.
On a serious note that is a cool joint. But if you take proper percussion w/ part cleanliness, set the welder up correctly so you don’t dump unnecessary heat/ have properly formed filets, and design your frame to not stress the welds under expected loading you’ll be fine unless the robot is falling from the top of the power station this year.

Just for another data point, on 103 we’ve been welding our frame (mostly TIG, but some MIG) for the past 4 years and never ran into any significant issues. There have been some minor warpage (that we normally fix with some shims) but this year we were able to acquire a beautiful 1" slab of steel from where I work that is now our dedicated welding table that should help significantly.

With the open build this year we’re more than happy with welding as we can always touch it up at our shop if need be between events.

As an aside, we’ve gotten to the point where we have the students teaching each other how to weld with very little mentor involvement. Once in a while we’ll stop over and give a pointer, but they are nearly completely autonomous. Proud mentor moment.

That’s where we’re at too. I’ll be stepping in a little more this year since I need to coach the students a bit on the differences in welding aluminum, but by and large my seniors teach the others welding technique and I just look in occasionally to make sure the novices are doing okay on their projects.