What color bumpers do you prefer?

So I’ve found teams with colors like red or blue often prefer to have bumpers with the colors that correlate with their team’s. But what I’ve also discovered is certain teams like the contrast, and certain teams with no colors at all (Black/White) have varying preferences.

Our team prefers red. Usually if we take the robot to a demonstration we only take the red bumpers.

Starting in 2010, teams were required to build two sets of bumpers to correspond to their alliance. Previously, they could be designed/colored however teams wanted, as long as it followed the rules.

From an aesthetic standpoint, I prefer individual bumpers. However alliance color coded bumpers makes it FAR easier to at least figure out what side a robot is on, even if you can’t read their number.

Starting in 2010, teams were required to build two sets of bumpers to correspond to their alliance.

Or a reversable set of bumpers :rolleyes:.

Personally, I prefer a set of blue bumpers. The red ones always seem cursed for us… (not finished on time, break more, etc.)

Though my favorite bumpers are 118’s.

I will start by agreeing with Kim on this. In terms of aesthetics I prefer the days when bumpers could be the color we wanted them to be. With that said I also agree with her that having bumper colors signify alliance is a welcome change that came out of 2010.

For our team, we love blue all the way. With blue being our main color, it just makes sense. Also with lots of blue and grey being incorporated into our robot in other areas, the blue goes along nicer. The red tends to clash in an unappealing way.

EDIT: To be clear this is purely based on looks. When it comes to which bumpers in terms of alliance I like being on, for eliminations at least, red all the way.

In qualifications, we like matching blue bumpers. In eliminations, we prefer red bumpers.

In qualifications, we like matching blue bumpers. In eliminations, we prefer red bumpers.

Since our team colors are black n red I’d prefer seeing the robot in red.

Blue is their team color, but red denotes a higher seed in eliminations and therefore you are favored to win the round.

The #1 seeded alliance will always be the red alliance in the eliminations.

I one l like to mix and match (when not competing) especially if our bumpers are in 4 or more sections.

We usually prefer red bumpers at competition, though we use black and green show bumpers when we go to demos and other community events. Or even just the competition practice day, when color doesn’t necessarily indicate the correct alliance.

Weirdly enough the preferred bumper color depends on the robot? Every season, whether or not we acknowledge it, the robot becomes associated with a particular bumper color. Maybe it just suits them?

For instance, OTTO was red, 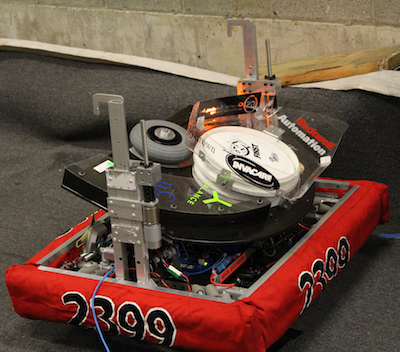 and Vlad was blue. 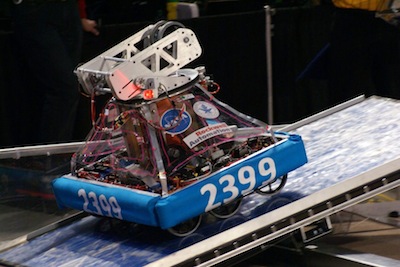 As much as color standardization was needed, I do miss the old bumpers: We were blue before bumper color meant anything. Note how we’re on the red alliance here:

We prefer red, because we’re on fire. Simple, really.

Of course, not exactly opposed to being red in elimination matches though…

Blue. Our team is always the underdog.