This could also help know when a fixed center to center is correct.

Definitely start with this.

I envision using a clamping bearing block for ease of manufacturing. 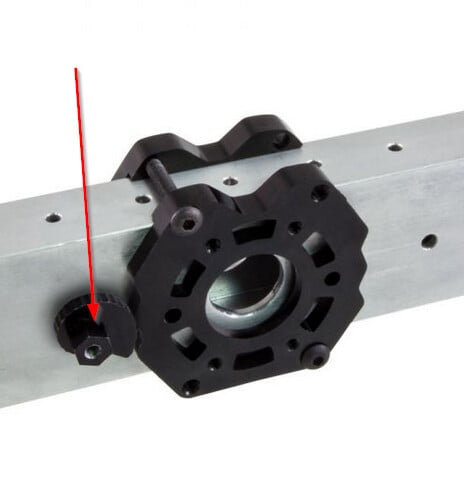 Again, be sure you are careful that cam doesn’t slip or move during competition.

Since timing belts don’t stretch, if you have a CNC machine (edit: or you’re very good with a manual milling machine), you can design the perfect center-to-center distance in CAD to give the belt the perfect tension after assembly.

If you don’t have a CNC machine, the clamping bearing blocks with WCP cams are a good option.

Use the KOP, and you won’t have problems.

I came here to say the exact thing. So yeah, do that.

We used WCP bearing blocks pretty successfully for the past few years, but definitely using a CNC and seating bearings is the better choice if you have access to one. If you’re looking for a good chain supplier, take a look at nitrochain.com (link to #25 chain). Their chain is “pre-stretched” and seems to change “less” as the drivetrain wears in.

A huge issue we ran into when using the bearing blocks was the axles sometimes shifting as the robot drove around. Chain tension has a huge influence on this behavior, so keep a careful eye on your cams and sprockets. We found that the threads in the bearing blocks sometimes become loose over time, so we ended up drilling out the threads in the blocks and installing slightly longer bolts and nylock nuts to prevent this from happening: 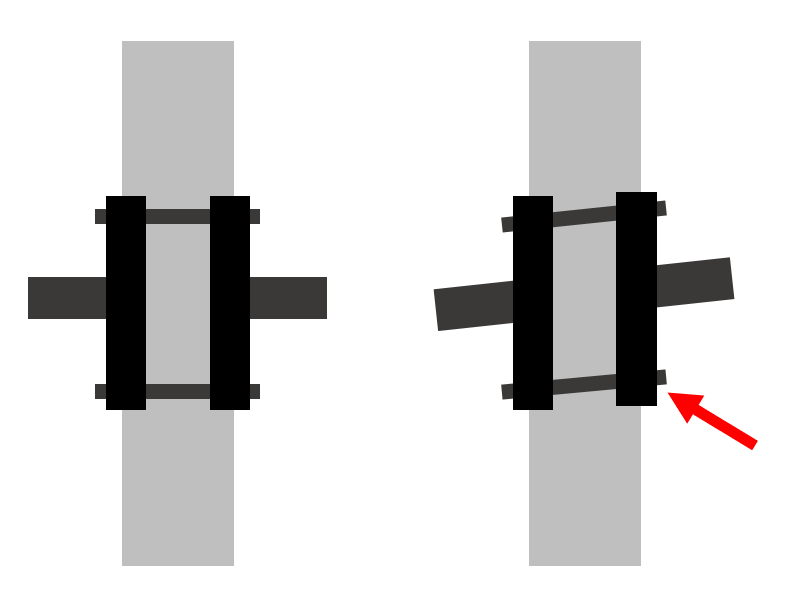 One thing I learned the hard way is that it doesn’t matter what you design if you can’t implement it properly. This especially applies to chains and belts.

My senior year of high school I made a roller claw using belts. While not ground breaking, the design was sufficient. Then I built it using rulers, bandsaws, and drill presses (probably not center punching it first). I ended up with a mechanism that sheered the sides off it’s pulleys every event and destroyed its bushings within two matches. It worked, sure, but it wasn’t especially good.

Fast forward to the summer: my friends are redesigning their robot for an offseason. It comes up in conversation that they don’t cut their drivetrain rails on a bandsaw nor measure using a ruler. They used at best a CNC machine and at worst a mill and calipers.

I refer to these tools as “precision machining.”

Many teams who don’t have precision machining likely don’t realize that it’s an issue. Chains fall off because the holes weren’t spaced properly for tension. The belt is too snug or walks to the left because the axles aren’t parallel.

Not having precision is fine - teams get by without it, but the key is knowing it’s a limitation you have and working around it (ie bearing blocks, calipers).

I’ve seen teams who’ve built the same robot (conceptually) as a top team but the difference is construction: manufacturing tolerances in thousandths vs eighths.

There are a lot of tricks and tips others will have, but the most direct way to reduce drivetrain problems is using properly applied precision machining*.

*Clarification: Teams can and do get along fine without precision machining… but knowing how (and why) to compensate for that starts with understanding that it is missing.

Kinda points to the larger question of “where does engineering knowledge come from?”

It might be worth perusing this spreadsheet of 30 design anecdotes that @AdamHeard collected in this 2012 thread.

We basically took Andymark’s KOP chassis and use the same wheel spacing and pullies for that. It turned out really well for us

That’s great ingenuity! Along those lines, I have long thought that a COTS supplier should make belt-and-pulley spaced gussets (similar to how these Vex gussets can be used to set exact gear spacing between shafts).

Some COTS gussets do just happen to work well enough for belt spacing. For example, in the 84t 20dp spacing of the 217-4183 gusset, you could do:

Anecdote: In 2018, our chain was so loose you could hear it slapping the bellypan every time we moved. However, the chain never jumped off the sprockets because we had the side-to-side alignment perfect, and even though it sounded bad, we weren’t off by all that much - it was just a very long run of chain. We had bearings in the drive tube and had the sprocket hubs flush against the bearing, ensuring that our spacing was the same between drive sprockets.

If you don’t have precision tooling (mill/CNC), go with chain and use cams to tension. Chain is more forgiving than belt on spacing. Be wary of versablocks going crooked like juchong posted above.

How is the chain adder (.018 or .012) that we seem to have accepted a constant number and not a function of the number of links?

I understand that its been field tested and the same numbers have worked fine for me, just wondering what I’m missing here…

It’s both a constant and a function. IIRC, part of it is slop in bearings and sprocket bores, and another part of it is chain wear. Most people say to “test it yourself” which is vaguely annoying because I know of few teams that have actually done this, and fewer that have released data.

The 0.018" adder is actually based off drivetrain distance using hex bearings (2363 released this data in 2015 if I remember right?), which have more slop than thunderhex bearings. I’ve found that the chain wears in fast enough that the chain quickly becomes a good fit, and can even become loose on very long runs. Any run that’s longer than a drivetrain (think elevators and such) probably deserves a tensioner.
I haven’t used a ton of #35 chain outside of arms, where I like to tension it anyway, but it’s very difficult to push #35 chain off a sprocket.

Chains will derail from sprockets will they aren’t properly tensioned and/or the sprockets are not co-planar. The advent of COTS shaft spacers and 3D printed spacers has made the later concern far less common than it used to be, since you can get consistently sized spacers to ensure your sprockets are the same distance away from your bearing. In the older days, if teams didn’t have a lathe (or didn’t have the time to lathe) for spacers, they would cut them by hand and could sometimes end up with mis-aligned sprockets resulting in increased odds of throwing a chain. There are many different ways to tension chains, but for WCD’s in particular the advent of the VersaBlock and WCP cam tensioner have made maintaining proper chain tension relatively easy.

Chains will break when overloaded beyond their rating. Generally speaking both 25H and 35 chain will be more than adequate for all but the most extreme cases in FRC drivetrain loads and should not snap (8" wheels can push beyond 25H, especially in games with shock loads like 2016). Running a traction limited drivetrain can also help prevent chains from experiencing excessive forces.

The teeth on aluminum (or steel) sprockets (either 25 or 35) really shouldn’t break off in FRC. I’m surprised to hear this happened to 610 in your post. I know some teams have played with 3D printing sprockets recently, but I don’t know what types of results they’ve achieved and what levels of load they’re rated for.

Also, AVOID HALF LINKS AND MASTER LINKS WHENEVER POSSIBLE. Get a chain tool like these (25 35) instead of using master links or offset links.

How is the chain adder (.018 or .012) that we seem to have accepted a constant number and not a function of the number of links?

For what it’s worth, 254 used two different offsets in 2017, when their drive gearboxes weren’t centered on their 6-wheel WCD:

.003 is nowhere near enough in our experience. Paul Copioli has a tool somewhere (I think in a presentation he made) that we used as a starting point and then did empirical testing of additional added distance. We used +.018" on a 10.75" C-C run (very close, if not exactly what Paul recommended) and +.030" on a 20.75" C-C run.

The 0.018" adder is actually based off drivetrain distance using hex bearings (2363 released this data in 2015 if I remember right?)

However, since this time, we’ve joined Brando’s anti-adder camp. We always either (a) use a tensioning system on chain runs or (b) follow the measurement procedure described in the post to get the center-to-center distance for the hardware actually being used.

The alignment is critical, but maybe tension can be achieved by adding a tensioner like in cars, chainsaws etc. Maybe even as simple as a spring, some nuts and bolts and a piece of Teflon like plastic.

You might find that most applications that use a spring tensioner, have the belt or chain moving in only one direction, so there is always a “slack” side, to add the tensioner to. With a robot drivetrain that moves in both directions, this isn’t so easy to do.

applications that i’ve seen that can go bi-directional have the pulley or sprocket move slightly in tension. i guess sort of like the cam idea.

Not just drive trains. We used chain & sprocket on our intake arm this past season. And, of course, that goes both directions (up & down) [usually, anyway

] Anyway we used a tension block like you described and because we were using chain-in-tube, this meant the tension block screwed into the side of the tube. Well a #10-32 screw into 1/8" tube wall is, at best, 4 threads. During a practice the intake arm took a shock from a driver running it into something and of course the arm of the intake multiplied that force into the chain drive. Usually this meant a busted chain, but this time when the chain went suddenly very taut what gave way were those threads and the tensioner block shot across the room. Many lessons were learned that morning.

We also learned this game that double-sided belts are cool, but pretty easy to tear apart (at one point we may have had the entire country’s stockpile of spares in hand 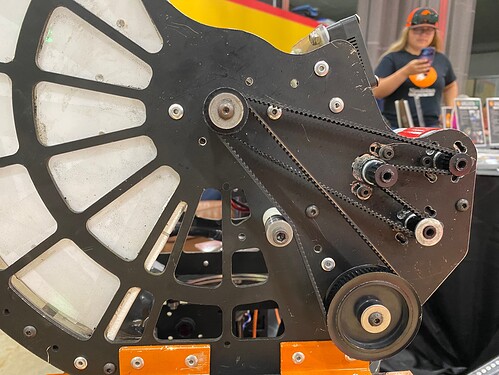