What does your strategy subgroup do?

With the exception of creating a game strategy during Kickoff and scouting during matches, what does your strategy team do during pre-season and build-season?

Develop the scouting systems: custom app, data transfer systems, whatever else you use for scouting. Also most of our scouting team is also on other teams so they do CAD, software and build.
Also scouting doesn’t really take leading position during match strategy at kickoff, we mix together all the sub teams for the first day or 2.

Very similar for us. Currently we have small teams working on rewriting the scouting app and on revisiting our backend data analysis tools. In match season they do match and alliance selection strategy. At kickoff, we involve the whole team in the initial robot strategy (“what” do we need to do), starting Monday the design team takes over (“how” do we do that). [which means the most heard sentence on kickoff is “That sounds like a Monday question”

This is also very similar to what we do. During the off-season, we also try to get new members especially to practice coming up with match strategies, using data, etc. (right now we’re using the 2018 game for practice and they really like it which makes me happy). Our strategy subteam is still very young, so it hasn’t 100% found it’s place, but we’re getting there!

Kickoff and week 1 they simulate the game and try to either validate or offer suggestions to change our overall game strategy.

They help answer the following questions while the initial design and fabrication happen:
How many cycles do we think is possible and what do we think an average score will be week 1 vs week 8? (dependent on which events we attend)
What’s the optimum autonomous path?
Which bonus RP is better to go after first?
How does our strategy change if paired with other teams which have lower or higher capabilities than us?
When is it right to play defense and what’s the best place on the field to do so?
What defense should we expect and how are we going to handle it?
What characteristics would our optimum partner robots feature if were a captain?

The OP’s question is assuming that strategy and scouting are the same thing or at least the same subteam. These functions are mostly separate on our team.

Scouting and scouting analytics development is IT-focused and tends to be driven by programmer-types. There is usually some involvement by an administrative-type person to handle the event planning for scouting as well as managing scout training. There might be some involvement by a strategy-type person for development of the scouting questions, although a programmer might lead that if they have interest.

For us, strategy development focuses on game analysis and interacts with the build and programming teams to determine the key robot capabilities as well as capability prioritization. Strategy lays out the way we want to play the game in various alliance scenarios and what the robot needs to do in order to maximize our contribution in those scenarios. Build and programming add the touches of reality of what we think we are capable of creating so the strategic plan is reasonably feasible.

Scouting pre-season activity focuses on making improvements or changes to the scouting or analytics applications. We can test using off-season competitions. In build season, it involves scouting question development and modification of scouting and analytics apps to handle the new question set. Some guesswork is used to start modifying the parts of apps that rely on external APIs like TBA before the season-specific data schema becomes available. Once we know exactly what the API schema contains, there is a mad dash to put the finishing touches on the apps before the first event.

For us, strategy is a more transient function. There isn’t much done in the off-season. There is intense focus from kickoff through the first 3 weeks or so of build season. Throughout the rest of build season, there is a gradual handoff of strategy to the drive team and event scouting leader(s) to sort of turn strategy development into strategy execution. Those working on strategy often pick up other roles later in build season and during competition season.

Strategy on 3128 is interesting, since it’s a dedicated subteam (like Build or Programming would be on another team), meaning we’re able to go wayy more in-depth regarding strategy and scouting throughout the entire year.

If we’re starting with kickoff and build season itself, Strategy gives a lot of input on how we should approach the game - it is overall our job to understand the game inside and out. With that knowledge and initial input regarding design theory, we go into a specialized and deep analysis of the game every build season - compiling “driver’s guides,” predicting what regionals/weeks of competitions will look like, prescouting, and of course, we practice scouting.

Now since we’re on the topic of scouting, 3128 has shifted to an electronic-scouting focus since COVID hit, meaning that we have a formalized Scouting Systems workgroup which is rolled into and works closely with Strategy. They design all of our scouting applications, however all members of Scouting Systems have to go through a general Strategy curriculum during the off-season, and during kickoff effectively do the same thing the rest of the department does for about a week. The general Strategy group provides input on data points and what the system should look like initially, and will work with the Scouting Systems group to test the system and provide continuous feedback for the entire build season.

Another interesting thing about our department is that all 3128 scouts at competition are exclusively derived from Strategy members, who have been repeatedly trained in scouting during the off and build seasons in order to collect optimal data. We understand that most teams have scouting as a more collective operation overall, however we have limited resources and can only send so many members to non-local regionals - to patch this issue and collect more data overall, we are developing a system for data redundancy which we will likely utilize to form scouting alliances.

During the off-season we have our veteran members run our new kids through curriculum, Scouting Systems members continue to improve the system, and other members will work on various advanced projects all involving critical thinking in the realm of FRC.

And be on the look out before kickoff! Our department is currently working on a “Strategy Whitepaper” where we plan to go in-depth about how we function throughout the entire year (including at comps). There’ll also be a massive section on how we suggest lower-resource teams, especially without a dedicated Strategy department, can better implement strategy throughout build-season and competitions (lots of resources will be provided)!

Whitepaper will be posted on CD, likely during the first week of January.

Our strategy team is responsible for running kickoff. They hold a ‘mock kickoff’ in December using a previous game so everyone gets a refresher on how kick off runs. Additionally, at the end of Day 2, the strategy team creates functional requirements. Things the robot needs to do, including performance standards (shoot 2 cargo in 3sec at 90% accuracy from 15ft away). List is in priority order. They maintain our “Monster Book”, that contains information about previous games so build can quickly research previous designs that might work for this year. The strategy team is also create the pick lists and elim strategy at comps

Lots of similarities with what other teams mentioned above.

Right after season kickoff, we work closely with Hardware Design and Robot Programming to create autos and outline the ideal capabilities of the robot. We meet on a weekly basis to keep updated on event results, notable strategies, or rules changes.

Last but not least, at events, we select a competition strategy team (match strategist, 2 stands strategists, and 3 subjective scouts) who are responsible for our match strategy and our picklist.

@kli ‘s post details specifically what we do to accomplish these goals.

One thing that has been mentioned a few times but probably not enough is watching matches. There are many benefits to watching as many matches as possible.

Prescouting to see how teams preformed in previous events.

We do this, and it provides us tremendous insight into our competition. For champs, we even scouted three matches of each robot in our division and put it into a database to know about how we would think rankings would shake out. Once you start getting scouting data from the actual event, prescouting gets less valuable, but for making strategies for your first 2-3 matches, knowing what robots can actually do as opposed to just pitscouting can be invaluable.

It’s ALL about the RP. This little oops in our final qual match (check the red hanger in the lower left video) dropped us from 4th alliance captain to 17th ranked. 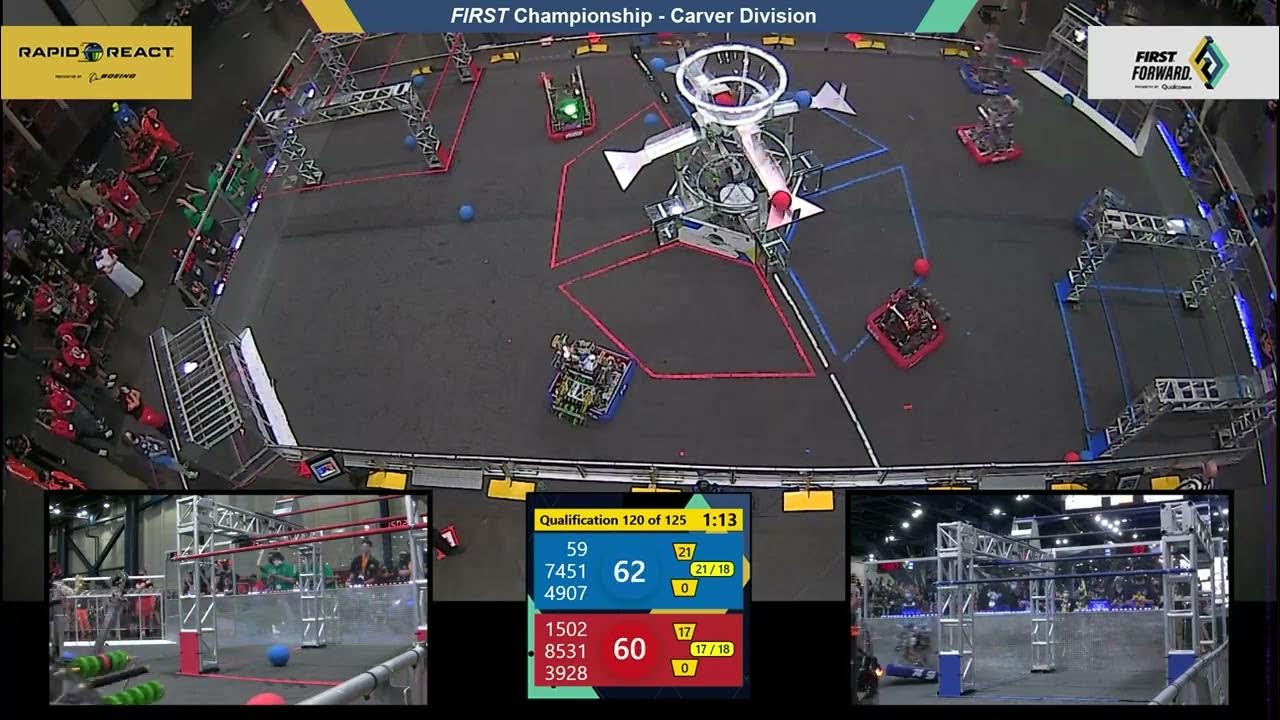 On 1745, strategy is a very small group of people(last year we had a small team and only 2 people on strategy) who do most of their work in the days and weeks leading up to competition. They’re creating the scouting system, doing pre-scouting on the other teams, and training the rest of the team for scouting. They also lead kickoff and game analysis. At comp, they organize and lead scouting, create plans for each match, and lead the alliance pick list meeting.

Scouting is actually something that is the entire team’s responsibility(with the exception of the drive team). The strategy team creates a schedule with shifts for everyone, and everyone is expected to show up and scout a certain number of matches. Because of this, creating a system that is usable and making sure everyone understands how it works is a big part of strategy. Strategy people focus less on gathering numbers and hard data for each robot(that’s what everyone else does) and more on watching the match as a whole.

This system has been developed from interacting with other teams, particularly 118, 254, 971, 973 and 148. Teaming with 118 in 2015 was especially eye opening. Any team in Texas that has a chance to sit down with them would gain much insight.