What has surprised you this year?

I know it isn’t over yet but this should give us something good to talk about while we wait for divisions!

So the question is, what part of Ultimate Ascent has surprised you? What did you get wrong in your initial strategy phase?

For me, I certainly didn’t think there would be nearly the number of good full court shooters. I’m also ashamed to say that I horribly underestimated the importance of traversing underneath the pyramid.

Like many other teams, we underestimated the difficulty of building a 30-point climbing mechanism and wasted a significant amount of build season trying to develop one.

[More comments to come if I feel more awake later]

In short, the scores this year. I did not expect the 200 point barrier to be broken until at the very least MSC, if not champs or IRI.

I didn’t think that there would be a robot that could both 30 point climb and ground feed.

I was really surprised by the way teams got Frisbees from the floor right side up. This year has been the first game piece in a while that requires a little engineering to make sure it is going to shoot right. You don’t need to worry about that with a ball.

I didn’t think that there would be a robot that could both 30 point and ground feed.

Something that I severely underestimated this year was how important robots with a ground intake would be, as in how well they compete in a regional and how helpful they are as partners. (Or how scary they can be as opponents)

Something that I severely underestimated this year was how important robots with a ground intake would be, as in how well they compete in a regional and how helpful they are as partners. (Or how scary they can be as opponents)

Not necessarily! Many teams, including teams like 118 and 1114, mainly scored using the feeder station. It’s a huge bonus in autonomous, but ground pickups can definitely be matched by robots that get frisbees from the pyramid.

I think Ri3D changed game from the start, with hundreds of teams copying their linear shooter. This lead to a higher scoring success than I would have predicted, leading to the decrement of the top-rung pyramid climb (versus hang). The attachment depicts a render of what my team had originally designed as a do-it-all strategy, climber and all- after our first regional we niched that strategy.
We ditched the 2-CIM corner climber for a buzzer-beater 10pt hanger.
This season taught me that I should design a robot around autonomous. Two frisbees at once, please!
I am surprised how optional the ground pickup was… I thought there would be more, just slow and inefficient, ground pickup robots.
If the ground pickup or climb ain’t fast, then lose it. Also, human intakes still require a good design, even if the concept looks simple.
…hopefully that was mostly on topic, as all of the above were mostly unexpected. :yikes: 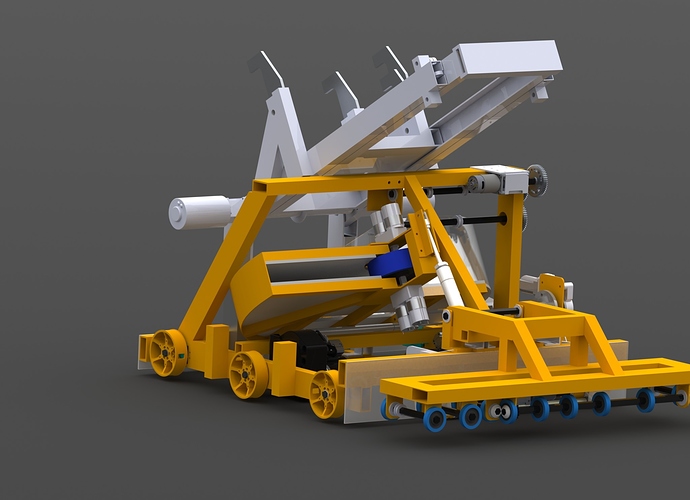 I learned that everyone’s hindsight is always exactly 20-20.

I was surprised (and tremendously pleased) that the GDC hit a grand slam two years in a row!

I was honestly surprised how little the smaller robot footprint seemed to affect us. Granted, we had to get a little creative with our electrical engineering, that said, it didn’t really do much other than make us rethink a couple minor “standard” things.

I was surprised (and tremendously pleased) that the GDC hit a grand slam two years in a row!

After seeing what I would consider to be a decline in quality after Rack n Roll up until Logomotion, seeing the GDC top their best game a year after it ended was quite an enjoyable surprise. Easy to explain, fun to watch at all levels, and manages to be strategically complex while stunningly simple and beautiful. Shrinking the load safe zone and making the scoring zone a 3 dimensional object really opened up ways you play both offense and defense and optional design constraints in ways you did not see in Foul-party 2011 or Rumble.

Ether posted a chart of all the match scores for 7 weeks. What surprised me was the sheer number of low scores. I believe this shows that there is a widening divide between the average First team and the elite.

Going under the pyramid proved to be far more useful than expected.

Full-court shooters actually dialing it in surprised me as well.

Probably the biggest surprise for me: autonomous was actually a highlight of our robot. Never happened in five years. Who knew?

Ether posted a chart of all the match scores for 7 weeks. What surprised me was the sheer number of low scores. I believe this shows that there is a widening divide between the average First team and the elite.

I’m not so sure about this one. Last year had lower scores across the board I believe, and the EWCP blog says that last year’s scores median score was dismally low. This year, with allt he resources out there, it seems like every team is able to score points, and as a result, we see less zero point scores and higher scores in general.

I think this years game piece is awesome; I loved the ease with which it can be scored accurately, but the difficulty in manipulating it consistently. I think this led to a lot stronger average robots, and helped to subdue ‘everything-bots’ (along with the difficulty of climbing of course).

Strategy-wise I think I nailed it on Day 1.

My only real surprise was that we couldn’t get a good disc delivery mechanism from the floor to the hopper, given the talent on my team. Meh.

One thing that surprised me was how much more advantageous mid-field autonomous routines are for Quals, since I didn’t realize that leftover discs were on the center line ::rtm::

Was surprised about being allowed > 60" for the start of the match ::rtm::

Nothing major though. We scrapped floor pickup last night since it was causing an over-complexity in our hopper. Now the discs don’t jam one bit. Was a bit surprised that we could shove 7 discs through in under 7 seconds with no jams, for once :ahh:.

Being an alumni of and former 9-year mentor for team 33, I’m disappointed that I completely missed how important autonomous mode was (i.e. picking up frisbees from the ground.) Those 15 seconds are basically an extra bonus time, and I feel like it’s important to use it resourcefully. Luckily, when paired with another team with floor intake, this becomes mostly a moot point.

Not game specific:
it caught me off-guard how difficult it is to switch teams. There are so many tiny adjustments, based on small nuances that each team has, and habits that formed from the previous team, that it is actually pretty stressful. It was an amazing experience though, and one I recommend to other mentors. It’s made me a better mentor. I love my team and everything they’ve taught me!

That we under-estimated the 95th percentile winning score in our early strategy sessions.

Usually we overestimate how high scores will be.

Also, I was floored by the number of teams that successfully 30pt climbed at a week 1 regional at BAE…