What is the best lift mechanism for scoring?

My team went with a arm this year as a type of elevator that could score anywhere and push us up on to level 3 of the hab (with pneumatic cylinders). It gave us many problems and wasn’t very reliable. 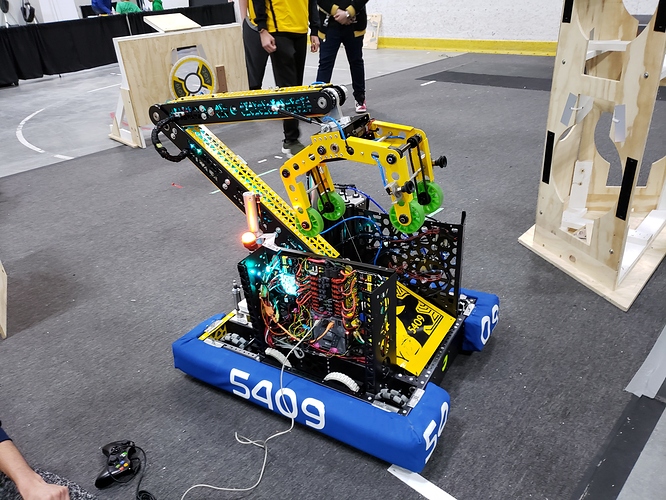 Image link is not working

It should be working now

That is a really great looking robot. Whats not reliable? What’s controlling it? If it’s a software problem now it’s the time to go back and try to tune it up or install different feedback controls.

Personally we’ve had a lot of success with elevator style lifts. In 2018 we ran a continuous set up and this year we ran a cascade setup. Elevators are nice and compact and do not require much fancy programming to have them do well. With all the different joints on your arm which need to work together in tandem the controls become complicated much quicker. Other than that 4 bars are also really effective at getting height. If you maybe want to keep your current arm design then I would suggest you simply have 2 joints a shoulder and a wrist as that removes much of the arms complexity.

The motor is in the arm using a bevel gear to turn the arm. It uses position sensors to know what the angle of each joint is and move the joint the the right location. The position sensors rubbed together and un-screwed it self and the wires fell out of the Rio sometimes. There were also programing problems in between the matches. It also took a lot of time to get it functioning properly in the bold season. The arm was also our only scoring system so if something went wrong (which happened often) we could do nothing.

I think the most reliable form of lift mechanism this year were the ones that pushed up with four points of floor contact using some form of motor-driven lifter. Many used their elevator mechanisms to achieve this. Our team did something a bit different, in that we used a rack-and-pinion drive on four separate post systems to lift the robot. It took some work to get it properly coordinated, but once we did it proved 100% reliable and very fast (about 9.5 seconds for a full climb and drive-on of the L3 Hab.) Here’s the mechanism fully extended as we climbed in the qualifiers at FNC Pembroke: 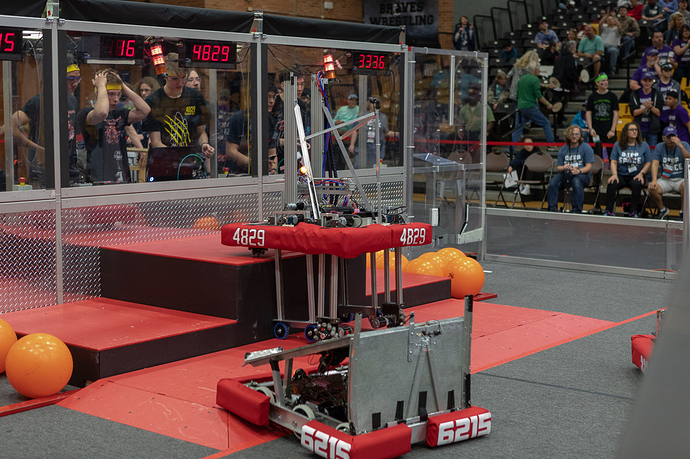 4829 climbing at FNC Pembroke.jpg1280×853 328 KB
Here it is after the climb, where you can see the posts run back up and can see the rack along the inside of the forward posts: 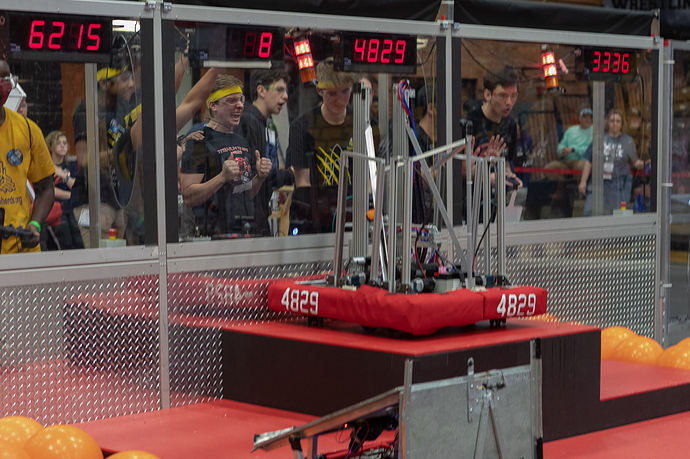 4829 on the L3 at FNC Pembroke.jpg1280×853 296 KB
It’s powered by 4 mini-CIMs in 20:1 CIM Sport gearboxes driving the pinion gears, each with a CTRE magnetic encoder run back to a Talon SRX. Gave us very precise control of the extension and retraction of the posts and an extremely steady climb.
cpapplefamily April 21, 2019, 3:02pm #8

I can understand if your only scoring mec failed how frustrating that would be, but that’s true with nearly every system.

It sounds like you identified a few problems and these don’t sound exclusive to an arm.
1 Find a more reliable way to attach the feedback device to the joint.
2 Maybe look into using the TalonSRX data ports and some of the great control modes they provide.
3 If your DIO in the roborio unplug find a way to secure that. (A small dab of hot glue?l

All theses items will haunt you no matter what mechanism you build.

You’ll also notice in the pics above that we used a separate elevator mechanism for our scoring. It’s a cascade elevator powered by a single 775 in a 25:1 Vexpro planetary gearbox. After our less-than-successful continuous elevator for Power-up, we switched to a cascade and a much lighter 1" t-slot extrusion structure that worked like a charm. One magnetic encoder on the drive shaft let us set very exact programmed positions for the elevator so that we could have the drivers operate it entirely by button controls for all scoring levels.

For most teams 6 weeks to iterate a design to make something reliable is not long enough. The next 8 months or next fall is the time to either get the old system working better. This requires fewer resources.

Or build something totally new, but requires more resources.

I’m not sure how reliable they are, but the suction climb mechanisms work beautifully. It allows for multiple robots to climb without taking up much space and it’s how the Turing alliance put up 147 points yesterday.

“What is the best lift mechanism…” for lifting what? The game pieces? The robot?

We used an elevator for game pieces, and a four bar for lifting the robot at the end of the match. Each mechanism is relatively simple. Combining different functions into one mechanism is where it usually gets difficult.

The game pieces. A mechanism to reach the different levels to score cargo and hatch. 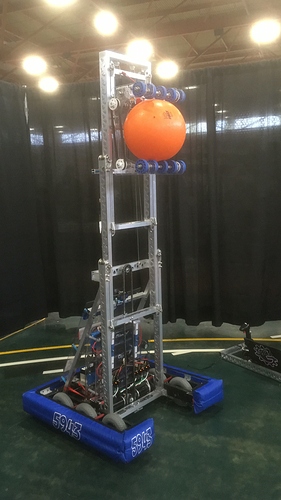 Our team designed our 4 stage elevator in CAD. We have used elevators for two years in a row now, and both years they did us well. Our first year (powerup) we used draw slides to link the elevator together. That ended up not working too well, as metal shavings got into them and slowed it down. This year we designed custom brackets to hold our system together and that worked great. I’d suggest an elevator to reach to tall heights.

Without going into specifics, there are two ways to lift game pieces to heights: elevators and arms. There are various types of each, but all arms rotate around a fixed point whereas elevators slide linearly. In general arms are easier to design than elevators but elevators are easier to control. You can combine elevators and arms to reach taller heights, extend further, etc. You can put an elevator on an elevator (aka multi-stage elevator), an arm on an arm (aka multi-joint arm), an arm on an elevator, or an elevator on an arm (aka telescoping arm). While some of these may be better suited for some tasks than others, most of them will work fine for most tasks. It just comes down to your design strategy, the packaging for the rest of your robot, etc.

It’s super unfortunate that your bot had such troubles this year, I enjoyed watching it on the field at Ont. DCMP, the colour scheme was tremendous.

I don’t feel there is any single right answer to your question, only what’s right for your team and the level of technical abilities you possess plus what the particular game calls for. There are a lot of elevators again this year, and as mentioned by others they are probably easier to calibrate and perfect for the various scoring positions. There are a lot of examples of good elevators this year again this year, the same as last year. A really phenomenal example of a hybrid elevator and arm is 971 Spartan Robotics this year.

I recommend this video https://youtu.be/T2goz1ghXXk. To see simplicity in action but superbly executed. I’m not familiar with their setup at all, but I’d imagine they pre-program the elevator and arm positions to the various delivery heights needed. I think it’s probably easier than trying to obtain the correct heights from a double joint.

I feel their game analysis was really smart with identifying that the game pieces this year were light enough to build a narrow elevator and arm for delivery, and using a vacuum gripper that can work for both objects.

Double jointed arms are supremely difficult to control well. Even 971 had problems with theirs last year. As evidenced by the majority of robots in 2019 and 2018, a cascade or continuous elevator is an effective way to lift a game piece. I’m a big fan of single jointed arms on single stage elevators (2471 or 118 in 2018, 254 this year).

Damn. I hate it when I get outsmarted by a ~10 year old kid.

Elevators are probably the “best” solution. However, arms are dead simple and can get pretty light. It really does come down to implementation, though. I’m a fan of arms, but it all comes down to team ability.