In 2015 we hacked together a practice bot with an old C-base frame.

Wow, you guys have come a long way since then!

This reminds me of our frisbee pusher from the same year. The carefully designed 3D printed foot wasn’t reliably pushing the bottom frisbee into the launcher, but it had worked beautifully during prototyping when they used the push stick that normally lived with the bandsaw. Naturally, they used the bandsaw to cut the push stick to length and put it on the robot. It worked great all season.

We have an offseason bot that uses an Andymark Decimate gearbox to directly drive a flywheel shooter. We found out the hard way at an outreach event that while the gearboxes were shipped assembled, they did not come assembled with Loctite. The 2 redlines fell out after some good use and we ziptied them back into the gearbox. Despite the motors spinning at about 15000+ rpm and the flywheel spinning at about 4000-5000 rpm for the majority of the remainder of the event, they did not come out and continued to work. We fixed it with Loctite when it got back to the shop.

There’s a picture of that somewhere, likely on the team’s wall of shame.

Prototype robot from 2016.
Ran out of collars, and hadn’t started tapping axle yet as a team (started doing that in 2017).

This worked for proof of concept until I could order more parts. 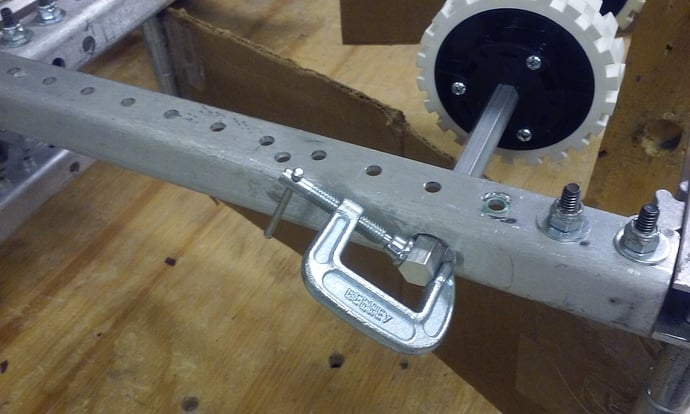 In 2017, when I was student, we realized quickly that our climber would have problems because the rope would move sideways as it wrapped around the winch drum, eventually slipping around the 1/2 in hex shaft, at which point we wouldn’t be able to climb.

So one of my teammates put pool noodles around the hex shaft and wrapped them with copious amounts of duck tape. She would wrap more duck tape around it after every match. We climbed 12/12 times in qualification matches and were an alliance captain.

You can kind of see our climber drum in this picture:

694 affectionately uses the term “Wildcard-ing” whenever we jerryrig something. It’s practically become part of our team culture (Both our 2018 robot and 2011 minibot were named Wildcard) and we love coming up with last-minute creative solutions in the most stressful situations.

I think the best competition wide Jerry rig was definitely all the “plane breakers” from 2018.
Most people just stuck long zipties on their bots but I saw things from sticks to tape measurers.

Zip Ties Not A Jerry Rig. We ordered special colors to match our robot. It was integral to the design.

In 2017 we had a 1 way bearing machined out for us by a mentor with some sick tools that we didn’t have access to. About half way through our 1st event it broke and our climber started back driving. Not only did it break, we had a 2 match turn around. Off the field and into the queue. We slapped a cheap ratchet wrench on it with some zip ties, never broke. We actually had the wrench get stuck on the robot.

Not really a jerry rig, more of a “nonstop repair job”.

In 2016 (against the advice of the mentors) the robot had thunderhex drive axles, and the wheels had hubs made from 1/8" thick steel with a hex broach. SHOCKINGLY the steel plates ground a groove through the drive axles. We discovered this problem after our first quarterfinals match when it became apparent that we had one functional drive wheel.

The robot was so poorly thought out that replacing a wheel was a ~15-20 minute operation. Bill Berggren from 1538 was kind enough to find us some steel hex stock, and we machined a single axle and welded a wheel to it before QF2.

Went on to win the event by a single penalty with 5/6 wheels functioning.

In 2015 we made the cutout in our chassis just a little too deep for our tote manipulator, so we were testing out adding a few different types of hard stops. One of the things I wanted to try was just putting a piece of 1/2in round stock across the chassis for them to run into. I drilled out the ends of the stock intending to tap them to 1/4-20, but used the wrong bit which was way too big. Coincidentally, the hole I made was just slightly smaller than a 10-32 locknut. Pretty confident that this wouldn’t get fielded as is, I hammered a nut into either side and bolted that bad boy in (thru the 1/4 holes I had already drilled in the chassis)

Thing worked great and we kept it for the entire season. Wasn’t until we got knocked out in semis on Galileo that I told any of my teammates how that integral part of our robot was mounted

This year, our grabber claw came back from fabrication with weirdly sized shafts (they were metric so a bit off) with threading on the ends so we just tapped four LEGO wheels and kept them there for the competition. We superglued them but they still kept coming off, so we just tightened after every match, and even lost some on the fields, but luckily we had backups

We used a leather belt.

Here is a picture of an offseason robot from summer of 2016 that was a tennis ball catapult. Yes, the “bucket” is a cheese-shaker lid. This is what happens when your build space is an old cafeteria. 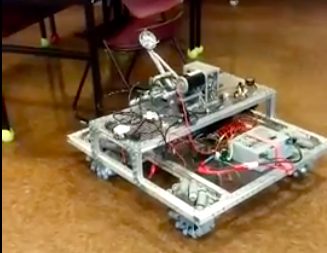 In 2017 for Steamworks, while prototyping a climber, we use a wrench as part of the prototype. It ended up working so well that we left it on our competition robot, but we chopped off most of the handle. I’m trying to find a picture but can’t. If I end up finding one, I will drop it here.

When we were testing our first ever robot (2007) we decided we needed to strap some weight to it. We used ethernet cable to strap one of those old multi-color iMacs to it. 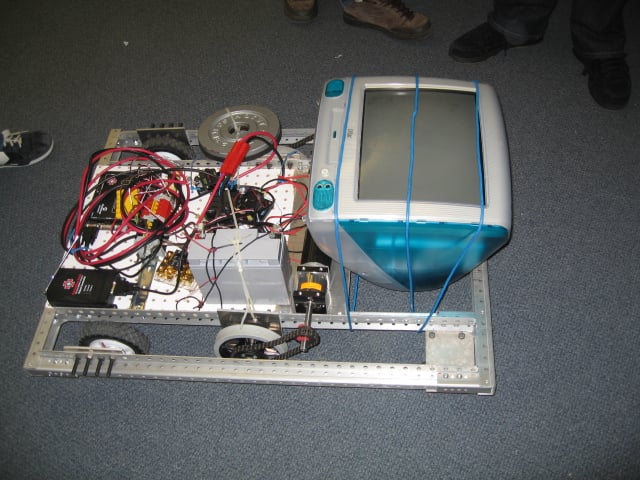 This reminds me of something I saw at North Bay…

Yes, the “bucket” is a cheese-shaker lid.

In the rookie year of 2012, 3946 built a wheeled launcher on a turret rotating on a lazy susan and the ball was lifted vertically through the lazy susan to the wheels by a pneumatic trigger. One of the prototype carriers for the trigger was a cap from an aerosol can of Bengal roach spray. The label clearly proclaimed that it was “Guaranteed to Work”. The team eventually settled on a PVC end cap.

Edit: thought I should add that in 2017 we went a little crazy cheesecaking partners in quals to the point where we were zip-tying the open ends of ratchets to robot frames to secure them. In the end we had worked on roughly half of the climbers at FLR and Buckeye. #3AndD 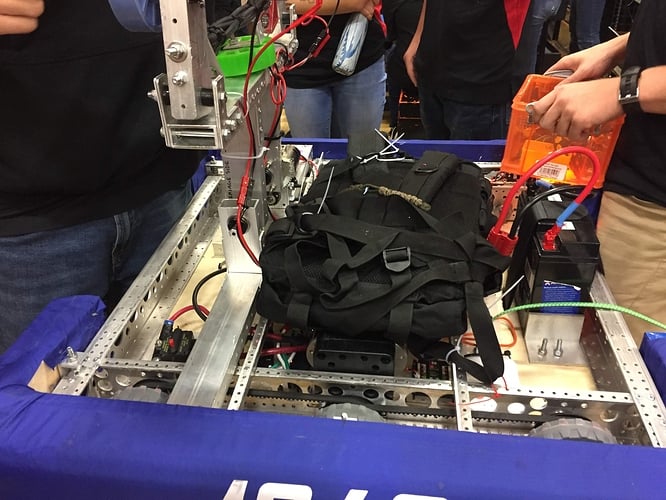 Every year, we bring a bot built by our rookie members to an offseason event to give younger members the competition experience. We didn’t account for our intake’s range of motion, and as it turns out, our intake ended up smashing into our electronics board several times during matches. To combat this, we zip tied a mentor’s backpack to the robot. When another team pointed it out in queue, we had to say, “Don’t worry, that’s supposed to be there.”