What is your team's long term plan for building student capacity?

As we transition into the offseason, our team has already begun the continuous improvement discussions. One topic that always comes up is how do we build student capacity in all areas and to start to address this we need a plan.

Instead of recreating the wheel, please let me know what your team is currently doing to ensure you always have a well rounded and skilled group of students in each sub group: mechanical, electrical, coding, design. business, scouting, etc.

For a more specific example, how do you handle first year students in each sub group? Are they assigned to a student leader or mentor to help build their skills?.. or maybe you use offseason camps so everyone has at least a little bit of experience when build season hits?

I don’t think there is a “one size fits all” plan, but I’d love to hear your plans to help us get the brainstorming process going.

One thing that was very helpful for me when I was a rookie and also informative as a veteran member, was something we deemed “rookie build sessions”. This was more of an optional event for students where veteran members would help mentor the rookie students in preparation for our off-season event in the end of October.

Students could learn to CAD, code, and understand what goes into developing FRC designs. They were also, hopefully, able to see the amount of time and dedication that goes into making a robot which helps them appreciate their work at the end of the day. The extra plus side to all of this was that when we actually went to the event, the students were more interested in all of the robots at the event and would even start to ask questions about design decisions.

While the material and subsystems may have been on the level of a well-iterated prototype, they were able to better build the confidence of being able to work on a team and share brainstorming ideas. They also were able to have their own drive team for their robot which helps them understand what can go into a competition setting!

We do a Fall Project in the fall semester, where students get some hands-on practice in their subgroups. The past few years we split into 5 groups of 6-10 students (mix of new and returning) and built robots to play an old FTC game. We’ve gotten mixed feedback this year (some students don’t want us to change a thing, others want projects that allow more cross-training, involve more prototyping, allow programming in C++, etc). The most important thing is that students get immersed in something hands-on and directly robot-related in the fall. It’s been fantastic for engaging new members and getting them trained enough to contribute in the spring, and for student captains to work through some leadership challenges before build season.

In the summer we do various workshops. For the mechanical workshops, we dig into a handful of mechanisms in more depth & with more theory than we get into during build season - we go over the math and physics for the designs, calculators (JVN, WCP Belt spacing, etc), look at pictures and CAD to understand what these things are actually made of, watch videos of robots that use that type of mechanism, and do little CAD examples. Last summer we did a virtual 1-hour session to go over all that, then chased each one with an in-person session where we prototyped an example of that week’s mechanism. I don’t know as much about what the other subteams did, but in general we use the summer to go deeper into theory and advanced topics than we have time for in the rest of the year. The idea is that students get thrown into the deep end during the school year and get just enough just-in-time lessons to complete their hands-on projects, and by the time summer rolls around they’re hungry to understand more about how and why things work.

We call our approach the bus factor approach. 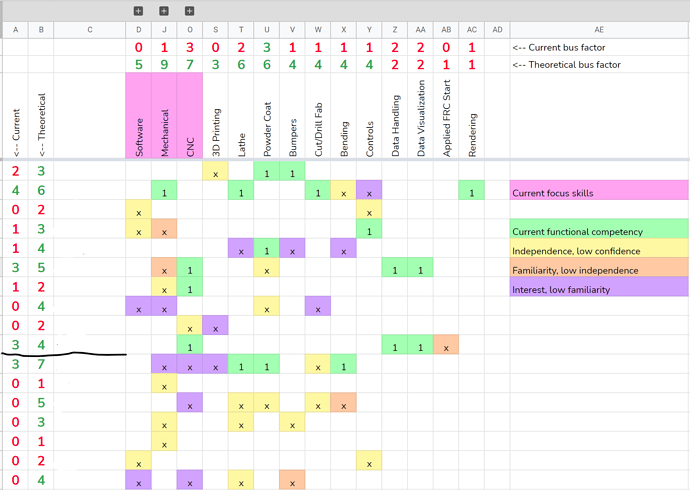 ^Here is what came out of group discussion this week. This is not cleaned up or particularly well formatted, just a screenshot of the live document we built during discussion. The blank column is students names that I have censored, but it’s one row per student that will be returning in 2023 (which is all of them, less the ones that are graduating). The students under the black line are currently in middle school.

Bus Factor: Measure of risk associated with having knowledge and skills concentrated rather than distributed throughout the organization.

For this offseason we are focusing on development of functional competency via projects - Specifically continuing to iterate our existing Rapid React robots, building a Rapid React swerve robot, and designing and building an elevator. We have in the past done very targeted instruction in greater detail, but we think the project tactic will also help hone project management awareness and other less concrete technical skills we feel we are presently lacking.

Having identified the gaps in collective ability, individual interests, and projects we’ll make an intentional effort to assign tasks to promote skill development throughout the offseason (i.e. when something needs to be lathed, it’ll get done by a team member who is learning to lathe, rather than one that already knows how).

We have a lot of time allocated in the summer (7 weeks of summer day camp of which each team member will attend at least 2, and during which time is split between doing FRC projects and running K-8 feeder programs) so that’s when the bulk of practice happens.

First year team members will have the chance to float around between skills until they find a place they feel useful and find interesting.

The particular tactics for training have changed a bit every year but the focus on covering all of our bases as an organization has remained pretty consistent since pre-season 2016 (2014 was our “rookie” year as we resurrected an old team number).

We’re choosing to focus on less linear skills first (mechanical and software specifically) as those are the ones that take practice more so than instruction, as we figure the worst case scenario is nobody learns how to bend/lathe/etc. before season and we can teach that on demand when needed.

Allison, this is so cool! Thanks for sharing this.

I may pick your brain further as we build our plan, but this is a really great way to look at things.

I’m very interested in how you do software training / practice as this is something that has been a challenge for us. Fortunately we usually luck into having one extremely dedicated coding student, but I dream of days where we have 3 fully capable students who are confident in making coding changes.

I’d be interested in learning more about your summer camps as well.

I’m glad somebody else finds it interesting and/or useful.

Software training is a … running experiment for us. We are graduating our primary software kid this year, and note there’s no green boxes currently in the wings there. In line with our project approach for the summer, and since we have twin robots anyway, the rising software kids are going to wipe one of them and start over and redevelop what we already have and see what they learn along they way.

It’s also helped to break software down into discrete facets that can each be understood. In our case we have teleop control (Including split arcade), Control Loops (PID), Vision, Auto Pathing, and Swerve Drive Code. We go back and forth on whether or not to include the pre-requisite tool use as a discrete unit (VScode, github, etc.) but this year we’re just going to send it without formally doing that first and we’ll adjust along the way if that goes poorly.

I think the most successful thing we’ve done in the past was “functional competency” challenge. We define functional competency as able to do the thing, with no warning or preparation, under pressure when it matters for a match outcome, and there’s no time for somebody else to double check the work. I had the kids pick the hardest thing they the thought they were functionally competent at, and then we had them do the task in a pretend “we’re about to play finals 2” scenario. That was reasonably good for either confirming their assessment of their own skillset, or making it clear that they still needed some practice.

A lot of the above will happen in day camp this year. Day camp has always been our primary training grounds, and this is first year we’ve formalized the requirement that every FRC team member participate in two weeks (of seven that we run, and they are welcome to participate in additional weeks). In addition to a collection of FRC team members each week, 2nd-8th graders can register as well. This year I’m working to organize customized activities/lessons for everybody. The FRC kids filled out forms with available weeks, preferred projects, interests they personally want to develop, and skills they feel comfortable translating to younger participants. The community participants filled out forms with available weeks, interests they personally want to develop, and desired vibe.

The skills/interests options on both forms are pretty well aligned to the bus factor skills. The desired vibe options for the younger students are…

I expect 5-8 FRC team members and 16-24 community participants in each week, probably in groups of 3-5. Each group will have a theme or a project that’s the main focus for the week, but they all float a little bit and pay attention to what other groups are doing. The 2nd-8th grade groups will each have an FRC kid or three that’s their technical support go to. We work 9am-4pm with an hour lunchbreak, but typically try to model it after a workplace as much (as is age appropriate). It’s very unscripted but we get a lot of experience.

I have no plans of growing up, but the same long term goal. She’s kind of a big deal.