What teams have desgined a 6 wheel drive system?

also, what teams have used it during the season as a competition bot?

I’ve tried searches but there is a lot and would be easier and easily updated with the thread asking for what teams that designed and built a 6 wheel drive system.

also, what teams have used it during the season as a competition bot?

I’ve tried searches but there is a lot and would be easier and easily updated with the thread asking for what teams that designed and built a 6 wheel drive system.

we did a 6-wheel direct gear drive train in 2004; what is it specifically that you’re trying to find out?

This year, or ever?

This year, off the top of my head:

you can find pictures of all of these at www.firstrobotics.net, and Im sure you can find some others in their galleries also

Yeah we did a 6-wheel drive system for the past 2 years. I find it is that those drive sytems are the most versitile, with or without a gearbox.

I know my team built a 6-wheel drive in 2002, but this was before my time and I don’t know too much about it. The only pictures I could find on CD were here and here, but they probably won’t help too much.
_Alex

We did a 6 wheel prototype last fall. We kind of parted it out though… but we still have the chassis and wheels on it.

wow, i wasn’t expecting all this information!

or possibly inventor files… thanks!

I think we are on our third year of 6 wheel drive. Scorpion in 02 had 6, well im pretty sure it did, and this years and last years had 6, with just minor adjustments. If you want pm me to remind me to look for some pics or files. Im sure i have something, just where is the problem. And if you ever come to a competition with us there, we bring a spare drive train to show to judges and whomever wants to see it better.

I know you said 6, but… Team 75 had an 8-wheel drive system last year. It was terrific for getting up steps. You can PM me for more info if you want.

I think my team has a lot of 6 wheel drive experiance. We have build 1 practice robot with 6 wheels with the middle 2 lower to the ground which allows us to turn but still be stable. We used the 6 inch pneumatic wheels from the 03-04 competition kit (i think). We also used drill motors in custom built gear box (only made w/ drill press, no milling or cnc machienes). Then we went to a rather complex chain system that connected all 6 wheels to the motor. I believe we had a top speed of 8 ft/s.

Here is that bot, the so called NoodleBot since we attached pool noodles so we didnt hurt the walls:

Here are some movies as well:

Although 6 wheels has many benefits of a 6 wheel bot, IMO there are also many setbacks that you will come across. Here are the problems we had with noodlebot and why we could not use that drive train design in the competition last year. It was so low to the ground that there was no way with those wheels we were getting over the step. A bigger problem is that it is extreamly difficult to get a 6 wheel bot with the teetering middle 2 wheels to go strait. A gyro or some other method of keeping it strait is really needed to accurate manuvering. There are also a lot of weight issue, noodlebot was 70pnds without anything else on it.

Right now we are in the middle of building a 6 wheeled robot that can go up the step and uses the 12 inch pneumatic wheels. We also shaved a lot of weight off the drivetrain by using a lot less chains then we used in noddle bot. We now only have 4 chains for the drivetrain instead of 8 and use all but 2 little sprockets. Right now its at 42 pounds. Once we get it moving and take some pictures of it I will show them to you.

If you are interested in more details just PM me and I would be glad to share. :]

We (862) have not had one for competition but this past summer we designed one to use for sensor testing but have yet to finish building it.

6 Wheels are the only way to go!! We used the 12" wheels on the outside and 6" center wheels to pivot on.

And the coolest 6-Wheeled bot … 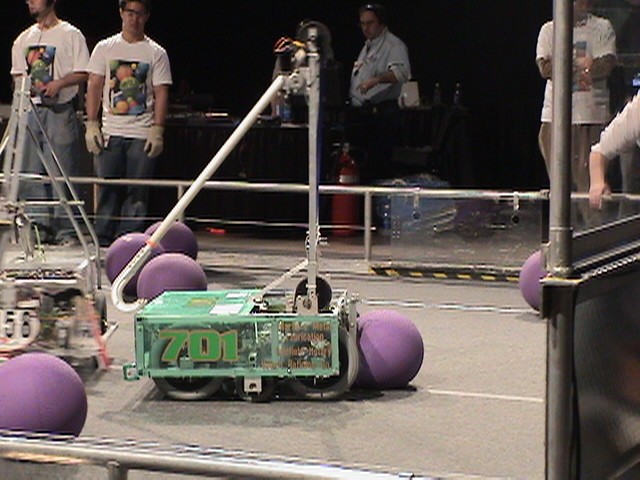 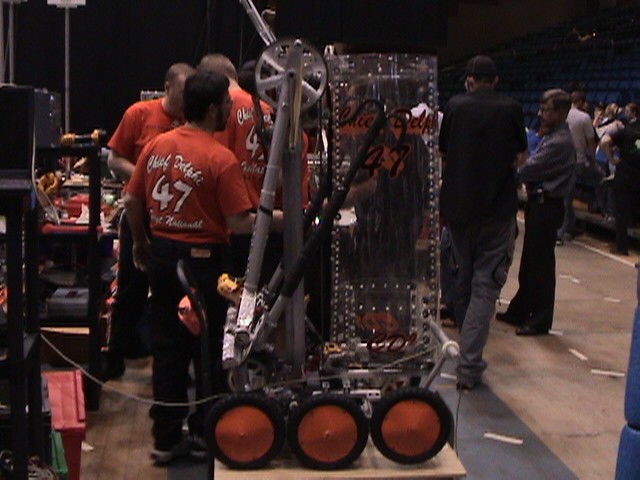 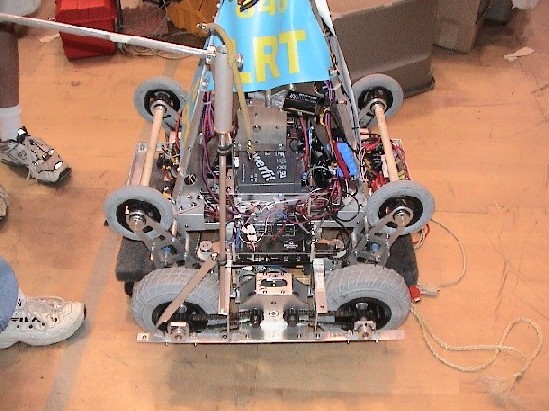 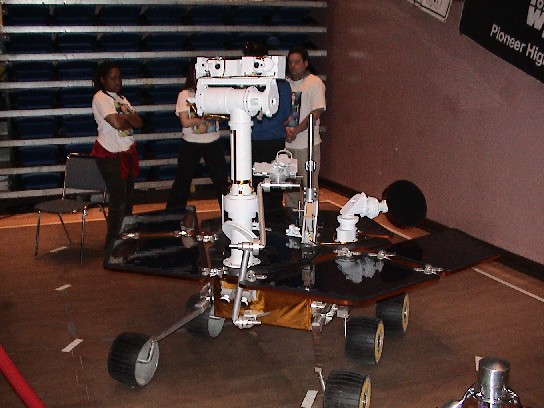 thanks for all the support!

Team 492 has made at least one six-wheel drive robot for the FIRST competition.

wow, i wasn’t expecting all this information!

or possibly inventor files… thanks!

I’m not sure if Team 25 has Inventor files, but they graciously shared their 2003 Evil Machine design with Team 103 who used it on their 2004 bot Monkey Business. Team 103 used only four wheels, but adding the additional two is no problem at all (In fact 103 had two more wheels on just two weeks before shipping). The Team 103 version of the Team 25 drive system is well documented in the 2004 Inventor Website found here:
http://inventor.cybersonics.org

6 wheels are awesome… i would use them on ANY robot even 6" wheels and definitely 6 wheels are necessary for anything over 8" / pneumatic otherwise turning sucks… the main thing is that the center wheel MUST be lower than the other two wheels otherwise its pretty pointless… i guess you get more traction (and less turning) but with the center wheel our robot w/ 12" pneumatic tires, turned about 20 times better than our 2003 bot which had 4 wheels and 8" rubber tires :ahh:

Team 356 has used a six wheeled drive system (with suspension) in 2003 and in 2004. In 2003 we had chips and drills driving separate wheels (with the front wheels being chain driven from the center wheels powered by the drills). In 2004, all six wheels were independently driven (chips, drills, fps).

In 2003, the front suspension helped us keep all six wheels on the ramp and top of the platform when we were attempting to take the hill.

In 2004, the suspension helped us climb onto the two platforms. We generally had 4-6 wheels in contact with a surface at all times.

This idea was a breakthrough for us. Previously we had to keep gearing down our robot so that we could turn without blowing fuses (especially turning in place). This last season, using 6 wheels, our robot could spin like a top. We used programming to implement a reduced turning speed (with a button to over ride the programming if we had to turn really fast). We used gyros during autonomous, but not when our drivers took over.

In conjunction with Team 716’s two-motor gear boxes (non shifting design
using drill and black motors from the Chief Delphi White Papers), our robot
was fast and maneuverable this year.

As it turned out, we also had some luck that the six wheel design
contributed to. Originally we hadn’t planned on going up onto the platform
to hang, but then it turned out to be really hard to grab the bar from the
floor. One of our students discovered that we could do a wheelie (by backing up and then quickly going forward) and climb onto the platform which made it possible for us to hang quickly.

We had wanted to direct drive the middle wheels from the gear box, but we
couldn’t fit the gearboxes (with drill motors, transmissions and gear boxes) side by side, so we wound up driving all six wheels with chains. It turned out to be very reliable using 1/4" chain. Basically the drill/black motor combination drove all three wheels on each side, so we got full traction although only four wheels were on the ground at any one time.

Sorry I don’t have any drive train pictures, but you can see our robot on
our web site at team980.com.

This last season, using 6 wheels, our robot could spin like a top.

Doug has gotten to the heart of the matter here.

The 6-wheel drive with the lowered middle wheel GREATLY increases the turning of the robot. I know MANY teams who implemented such a system.

My main question is…
What distance do you drop your middle wheel?

What does everyone else use?

Lately, in all my pre-season design efforts I’ve used 3/16. I don’t really have any good reason for it; other than Steve said it works for them. (And I LOVE their robot in action…)