We’re close enough to kickoff now that I expect most teams have already prepared/are in the middle of preparing for kickoff. Given we don’t really know what’s in store for FRC-2021, how is your team preparing? What are you doing differently from previous years? What’s your plan for the 2021 season? Schedule, how will you collaborate, etc…

FIRST has given us so little information that I doubt many teams have a plan. We don’t know what specifically FIRST expects from us in any of the challenges, nor when they’ll be due. So I guess our plan is to make a plan when FIRST tells us what to plan for.

We’re close enough to kickoff now that I expect most teams have already prepared/are in the middle of preparing for kickoff. Given we don’t really know what’s in store for FRC-2021, how is your team preparing? What are you doing differently from previous years? What’s your plan for the 2021 season? Schedule, how will you collaborate, etc…

We are not doing much for kickoff day. Next day, when we’d normally be brainstorming ideas, we’ll have a leadership & mentor group planning meeting to formulate some season plans.

But after that we have to make some decisions and move forward, because truthfully I think we should try to knock out whatever things we do in a similar time frame (<10 weeks) with the reality that we aren’t used to working too far into Spring, when people have other fair weather activities to start into. So managing this later time will be something new we’ll have to approach this year.

I think the biggest thing I see is that we probably should expect less project time this year, and so to aim for achievable goals in the projects and not try to do everything. While I’d like to both improve our robot and build a new robot, we’ll have to really consider how long that could take with less work time likely. So we will have to be a little picky about what we do for build and challenges. There is opportunity to emphasize and foster students working more in their free time on these project, which I am not sure how that will go.

We haven’t really figured how to replace lettering criteria which heavily weighted time in shop during build season. We won’t have communal meals, obviously, and that somewhat was an incentive to show up, be on time, and work later., so we will again have shorter build project work times also because it won’t be grab some food then get back to work. Time in the shop will be more limited than that.

Our plan… is to have a plan. We have student leads set up for each of the challenges. Once the live stream is finished, we’ll go to break out rooms for each challenge so the leads can talk with whoever is interested in that challenge to develop some sort of plan.

From there, we’ll come back together and figure out what our meeting schedule looks like - how many meetings each week, what we need to do in person versus what we can do remotely, etc.

This is the first time in team history we haven’t had a full season calendar prepared before kickoff. Granted, we usually end up amending the calendar with additional meetings as needed, but it’s nice to at least have an idea of what to expect going in!

Our plan is to watch kickoff, watch the Bills game, then formulate a plan based on what the challenges are, which of them we want to do, and how many students (we have seven) want to do what.

So, yeah. No plan as yet–we need more details first.

That’s as far as we have gotten. We’ve spaced out things in the shop and done a CAD model of it to determine capacity, and we’ve built out a workflow for reserving spots that lets us hold to that capacity.

And thankfully, our kids seem to be understanding on the virtual meetings front.

How long do you think the Kickoff program will last?
We plan on watching. Giving students time to read the rules then having a virtual team meeting.

How long do you think the Kickoff program will last?

We are a small team >10. Our shop is not real big but we have some extra space we can use as long as no one else is using it. So this will help us distance. Our current plan is to meet virtual for kick off then in the shop in the afternoon. After that we will meet on Saturday afternoons and Monday evenings. We will use January to work on upgrades for our game bot and training for the newer students. If things go well in February will will start some driver practice (new drivers) and we will start an Everybot build. The Everybot should be a great project for the new students and we have most of the parts. Hopefully we can take it as a second bot to offseason events in the summer/fall.

Yes, but Dean is talking so expect an hour and 45 minutes to be more accurate. (Last year at kickoff in manchester there was a timer on the wall to keep him on track. He blew past the timer, and it started counting up and then back down again…) 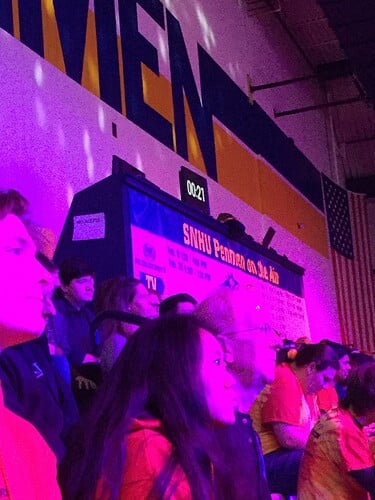 I thought the the plan was already pretty well worked out

I’m glad to say in 10 minutes, i’ve thought of a game, involving the surplus of fuel but more importantly, the return of Dozer.

If dozer isn’t part of the game, is it really a FRC game?

Our plan is plan how to get people excited again. We took a big hit this fall with online only and a robot still in pieces.

Lot of people dropping out without the hands on part. We’ll be able to start working again this month, but I feel the damage is done.

(PS. not FIRST’s or the school’s fault, just another casualty)

We plan to have our regular virtual team meeting Friday night, and then meet again Saturday morning.

Still no access to school, no club meetings allowed, and very few students showing up in the virtual meeting.

I don’t know that we’ll actually do anything this year. Time will tell.

Our plan is plan how to get people excited again. We took a big hit this fall with online only and a robot still in pieces.

I think a lot of teams are in your place. I work with FTC teams who have been trying to build robots and compete remotely, and we are about 50% participation from last year so far, if that. And those teams are struggling. It often comes down to the leadership of the more experienced students and if they are willing to show some excitement about the remote/virtual experience even though it’s not ideal.

In FRC, we’re taking the year off from competition and starting a new team (well, “new veteran” team, most likely) with a target of competing in Jan 2022, though we’ll build a robot and compete in a fall offseason event if the opportunity materializes. For us, it’s a good year to reset, evaluate, and develop something new and exciting for the future instead of worrying about whether or not we’ll even be able to compete this year.

But we’re meeting remotely, and our tools are OnShape for CAD, Mattermost (a Slack clone) for chat/sharing, Google Drive for documents, and either Zoom or Google Meet for video conferencing. It’s not ideal, and not everyone shows up, but I’ve found that having the kids remind each other via word-of-mouth (aka text messages) about an hour before the meeting is more effective than sending email or chat reminders about it to get them to show up.

Our school district announced before winter break that we would remain doing only virtual meetings and classes through spring break. We’ve been entirely virtual since last spring break so we will go at least one full year without a student in our build room. It sucks but the precautions make sense, really high rate of COVID spread in the community the district serves and a younger teacher and sports coach passed away at our school from COVID in the Fall.

We plan to do at least some of the virtual challenges, game design has the most interest but that’s mainly because there are less details out about the Innovation Challenge. Any robot build or skills challenges involving use of the robot we’re considering not possible until at least April.

The one bright light is we’ve had surprisingly good virtual participation in meetings. We are finishing up purchasing of some small simple robots to send home to students for a virtual build and that has definitely kicked interest back up. Taking a little longer than we hoped as our purchasing process is moving more slowly with almost all staff working remote.

We’ll do the kickoff Saturday and figure out from there how often to meet and what we will participate in.

We are renting out a movie theater to have kickoff in a huge space, compared to our team size, and on a big screen! We are lucky enough to have a community Cinema that allows this pretty cheaply. Hopefully we’ll get some team members to show!