What's the smallest/lightest motor you have been able to use to climb?

Our team has used a large cim motor with a 256:1 gear box every year for our climb, which is very large and heavy. We want to scale down but we don’t know what motors or gearboxes to use.

We’ve used a CIM before, but last year the single CIM didn’t quite do it. We switched to two 775 Pros, worked well.

The time it takes to climb, the geometry of the mechanism, and how far up it needs to go, will all factor in your choice.

I mean, if you have just enough power and a ratchet system, I don’t see why you can’t gear aggressively. A ratchet system is as simple as a ratcheting wrench.

When we wanted to be fast in 2017 we had two CIMs geared together. That was fun, thing got up our velcro rope in seconds.

As for light, we used a snowblower-type motor one year iirc, and I think that was the lightest we’ve done, but it was slow

The easy part of climbing this year is that you only have to get off the ground, so power isn’t an issue. This means that you can use a very light, weak motor so long as you gear it down sufficiently. Since you need a ratchet to stay up (climbs are scored at T+5 iirc), you won’t be stalling the motor, and you’re only running it for a few seconds, so your primary limitation is the current draw each motor pulls. A design calculator will help you optimize this, but I’ll note that you can climb on a 40A breaker with 1 775pro on a 2 stage reduction.

Give me a lever long enough and a fulcrum on which to place it, and I shall move the world.

It’s all about gearing. You can easily climb on a NEO 550.

We used a single Mini-CIM back in 2017 to climb, not lightning fast but not agonizingly slow either (maybe 3 seconds?). Given the NEO 550 outputs similar (or more) power it should easily handle a climb with proper gearing.

393 motors were legal at one point, right? 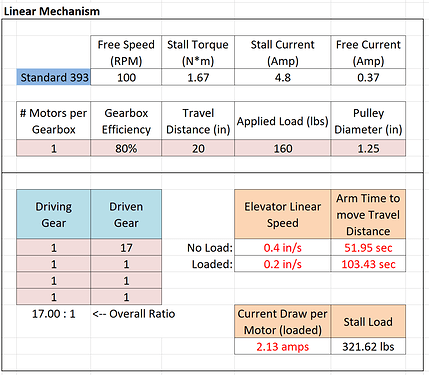 Seems reasonable to me

This is a great application for the mechanism calculator in my design spreadsheet. You can enter the load, drum radius, and a defining characteristic (e.g. desired linear speed, current draw, stall voltage) and experiment with different types/numbers of motors. It will tell you the other characteristics that you don’t input: proper gear ratio, current draw, stall voltage, and a number of others.

We have used a bag motor and a versaplanetary 100:1 successfully with no motor issues.

The easy part of climbing this year is that you only have to get off the ground, so power isn’t an issue.

Well, the switch can drop as much as 18", and if your robot tips at all on your climb you need even more room, so I’m not sure that this take is very useful if you want to build a climber that gets you off the ground every time.

In 2018, 1293 used a pair of RedLine motors into a DeCIMate into a Toughbox Micro. Worked the one time it climbed (hook deployment system was…lacking), just need to make sure you’re operating at Full Sends Only when you do for the sake of the motor (you want it running close to free speed so the fan can cool the internals). Total ratio was about 41.3:1, and we ran 1.25" VersaRoller as our drum.

If I were to use RedLines again in 2020 (and we might), I’d use a Sport Two Motor gearbox instead for operational flexibility with our other 57 Sport gearboxes.

Use a Falcon or a NEO. More power than a CIM at a fraction of the weight and size.

775 are lovely motors but they really really don’t like stalling. We were playing with a shooter prototype. Single 775 direct drive, max RPM. Did not account for how amazingly mushy this ball is. Second attempt, stalled motor, and started letting the magic smoke out. It was stalled for around 1 second.

A couple of tweaks later, including the addition of a flywheel and we we getting the required range, with no issues.

We have avoided 775s in climbers due to the stall issue. If your software monitoring is good enough then they are a fabulous choice. Cims are almost unkillable, though we melted one running an elevator at stall doing demos. Have also used a minicim which saved size and weight and gets you almost the same torque.

Our climb motor allocations for the past few years:

10:1 VP stages are notoriously terrible at taking high loads/shock loads. I would recommend that teams try to avoid using them for things like climbs or arms.

The winch body was made of Delrin