Where is height of robot measured from?

We were thinking about tipping our robot in order to gain more “horizontal” distance (in regards to the field floor). Is the height of the robot measured from the floor, the lowest point on the robot, the wheelbase/ frame or somewhere else? 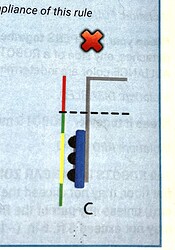 image1196×1704 690 KB
In this image it shows the 16” outside the frame perimeter rotating with the base of the robot. Would the height be measured horizontally (in regards to the picture) or would it be measured vertically, from the lowest point on the robot?

So whatever is considered to be your robot resting normally on the floor is where its measured from, and for the most part the 16 inches is perpendicular to that.
So tipping your robot sideways would get you more “horizontal” area (5’ 6" end to end), but you have to be careful with bumper rules. As if you were to extend something “below” where your robot normally sits on the floor, it very well could violate the bumper zone.
(and im sure someone can correct me if im wrong)

Per the blue box for G106 “This measurement is intended to be made as if the ROBOT is resting on a flat floor, not relative to the height of the ROBOT from the FIELD carpet.”

Horizontal, in that picture.

Look at the blue box image for the previous rule, G106. It shows the height moving with the robot’s orientation, when it’s tipping.