Why do teams die: team attrition in 17 graphs

Inspired by some recent threads, I decided to finally finish parsing data I’ve had for a while on what can predict whether team dies. Since the last few years have been weird, I looked at teams the 2017->18, 2018->19, and 2019->20 transitions.

Summary of what I found:

Anyway, here’s all the data, in way too many histograms:

Number of unique sponsors listed in the team’s official name

It seemed that so far, number of sponsors and being a younger team predicted a team’s death the most. Wondering if there was a correlation between the two, I dug more and ended up finding some pretty interesting trends.

Looking at the sponsor lists of these teams with only 1 sponsor (in almost every case, the school) led to what I believe is by far the best predictor of a team’s death: country. Stats for countries with at least 10 rookie teams each year:

This trend holds, even when looking purely at veterans:

Notes:
[1] Teams that did not play in an official event are excluded from the elo calculations
[2] Rookie year plots exclude teams that played in an offseason before their first official rookie season
[3] Number of sponsors were counted from the number of slashes and ampersands in the team “name” field in the TBA API, and may not be fully accurate

Thanks for compiling this data, Rachel!

This is all super interesting, but the most important takeaway for me was the following: 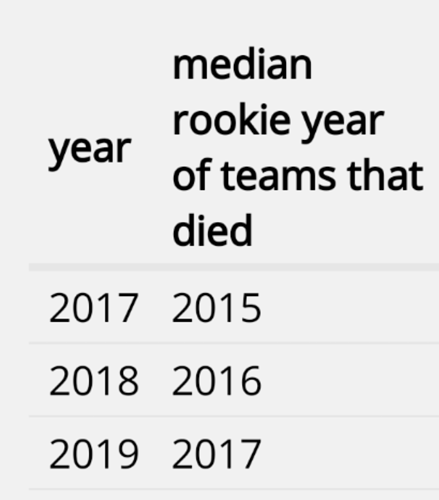 All these teams most commonly die 2 years after their rookie season, which coincidentally is when they lose a lot of grant options. Clearly only supporting teams up to their second year isn’t a successful strategy because a lot of them die off after that. This isn’t anything new to most people, but it’s good having numbers to back that up.

Certainly interesting data… but I suspect the list of reasons are more complex. For example, I’d want to know things like:

The data we have access to is only a small piece of the puzzle - it presents correlation, not causation. While that can certainly be used to identify some trends, it can’t be used to identify all of them! It’s really important when looking at what we do have to remember this, so we don’t hyper-focus on one area of attrition while allowing another area to go unnoticed.

For example, rookie teams are more likely to have lower numbers of students and mentors, based on my experience. In a saturated region, they are more likely to come from smaller rural schools or be community based. They are more likely to have longer distances to travel to their first event (excepting teams that form immediately following the introduction of an event in a new location!). If we were able to isolate these factors (we don’t really have the data to do so), we might see some of them have even higher correlation than what’s been found here.

I would like to see this data based on location.

Proportional elo graphs (thanks @asid61 for the suggestion), where you can more clearly see the trend between team performance and teams dying. As I previously said, I believe this is more correlation than causation (teams with a strong structure likely to do well, not a bad season immediately killing a team), but it is still interesting to see: 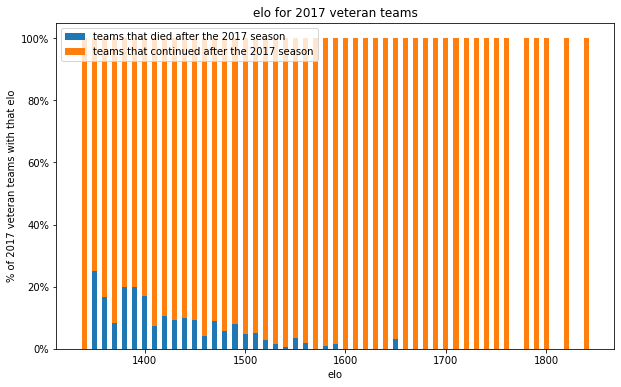 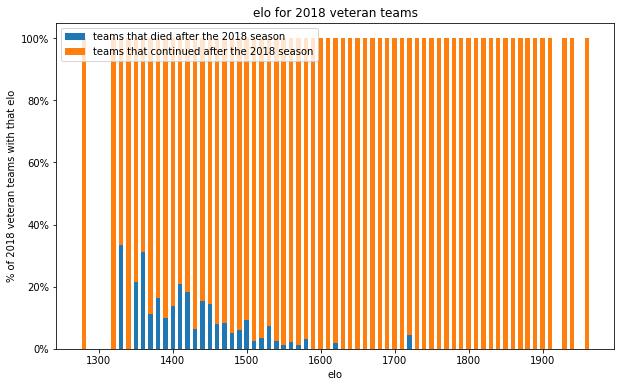 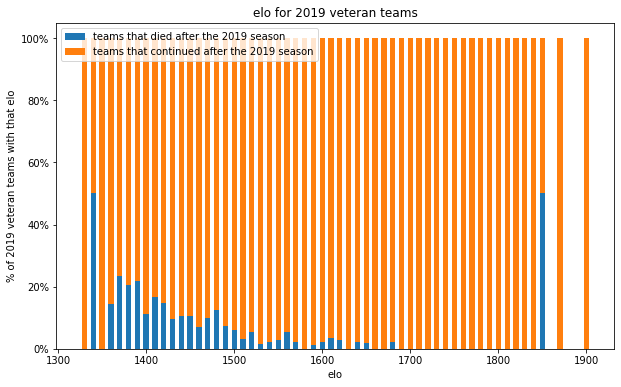 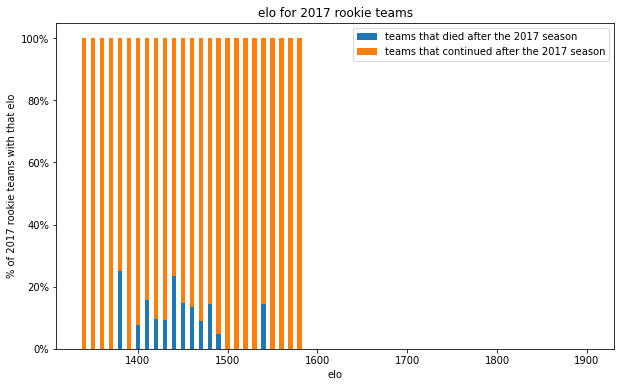 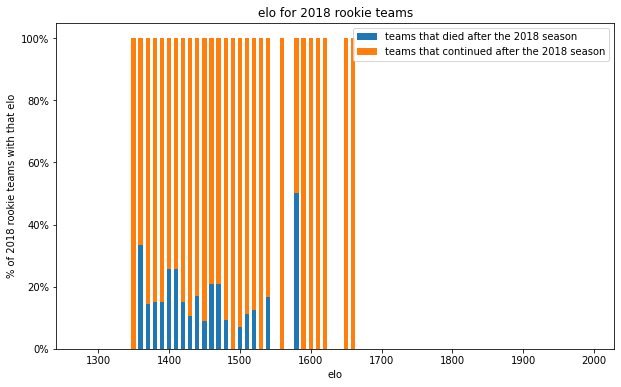 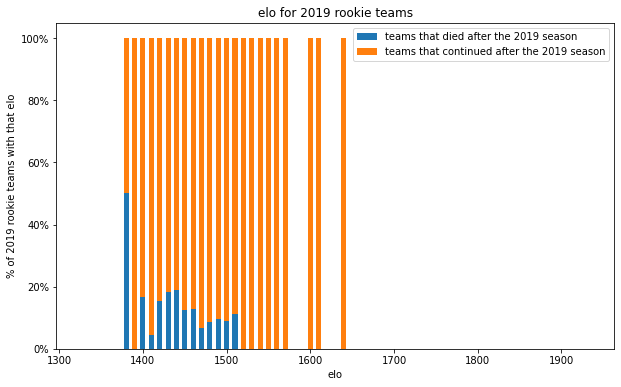 Number of team in China was increasing really fast but,
Unfortunately many teams in China die because of 2019 chinese regionals cancellation.

Agreed. My first thought here was how grants or external non-sponsor money (I’m thinking of all of the Michigan-specific grants available) impacted rookie team survival rate.

Why do teams die: team attrition in 17 graphs General Forum

Thanks for compiling this data, Rachel! This is all super interesting, but the most important takeaway for me was the following: [Screenshot_20210424-115657] All these teams most commonly die 2 years after their rookie season, which coincidentally is when they lose a lot of grant options. Clearly only supporting teams up to their second year isn’t a successful strategy because a lot of them die off after that. This isn’t anything new to most people, but it’s good having numbers to back that …

I have to imagine this would be the overall observation - it’s easier for first/second year teams to find grants, but gets harder as you age out of new team grant territory.

led to what I believe is by far the best predictor of a team’s death: country. Stats for countries with at least 10 rookie teams each year:

I’m curious how you came to that conclusion - what do you see in this that makes country a predictor of rookies failing. It would have been nice to see this as percentages, but to me it seems that, with the exception of Mexico (seriously, congrats Mexico!!!) the attrition rates are relativelyyyy similar between countries overall. I feel like counting China in this is unfair though because they’ve had a series of seriously unfortunate calamities affecting them, unlike any other region in the world.

I’ve been working on a project to see how the income and other factors associated with a team’s zip code affects factors such as travel cost and overall district points.

It’s not as useable or pretty as I would like, but the beginnings are here on my git hub, and some of the charts have been put in this very rough google doc. After I finish the semester, I plan on sharing this data in a much more valuable format.

Goal 1 Classes 1 Teams, 1 Main 1 Graph 1 Travel Cost(not in progress yet) 1 Definitions 2 Team: 2 Year 2 District 2 Goal The goal of this project is to analyze factors such as income, population density, and distance to travel to competitions has on...

Number of team in China was increasing really fast but,
Unfortunately many teams in China die because of 2019 chinese regionals cancellation.

I feel like counting China in this is unfair though because they’ve had a series of seriously unfortunate calamities affecting them, unlike any other region in the world.

Could be Off-Seasons. China’s Off-Seasons aren’t much different from a regional, you just don’t go to championships out of them.

@AlexBurchard can obviously speak to this better than I can, but I believe this is similar to many of the Turkish teams before they established their own regional. Teams would register to get the kit of parts, never register for an event, and then Turkey had a big off season even in Decemeber where the teams would compete (including for things like chairman’s and other awards that wouldn’t be normal for an off season event). There was no advancement to championship, but it built a core of experience and teams that was then able to transition to a “traditional” regional model.

Teams would register to get the kit of parts, never register for an event, and then Turkey had a big off season

Yeah, it’s just confusing since I’m used to events being logged with the team. As an example, 6300 is a team that attended an offseason prior to their official rookie year.

When I started looking into this awhile ago, I was curious about if there could be anything said about team life expectancy and ~4 years (ie maybe you’ve got a particular set of parents + kids that are key to pushing for team survival). My hypothesis was that a majority of teams that fold do within the first 4 or 5 years and would come pretty close to leveling off after that point. My hypothesis wasn’t quite right, but the data is still interesting. This is the data I’ve collected and updated in 2020: 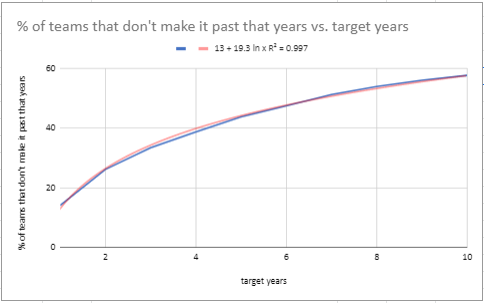 This chart is the TL;DR if you don’t want to go to the link. A logarithmic trendline seems to fit pretty well for whatever that’s worth. This graph takes into account that if you want to look for teams that survived for say at least 5 years, you should only look at teams that started in 2015 and before.

Code should be here: TeamAgeData · GitHub

Turkish teams didn’t have to register with FIRST to get a KOP. Fikret Yüksel Foundation gave all new teams a KOP for the off-season for $500 (and we gave them numbers well above FIRST ones of the year the off-season was taking place until they got real FIRST numbers - ex: 6064 was 7011 in the first Turkish Robotics Off-Season, Flare (now 8054) was 8001 from the 2016 off-season until the 2019 off-season, and became 8054 in 2020. We have maybe had a couple teams register for official events, and not take possession of their KOP because of being unable to pay customs fees, and only one team took a KOP at kickoff successfully and failed to compete at a regional, but they came back the next year as a real team and competed, and won. That was due to issues with their school. It’s a cool team in the center of the world actually

You cannot actually get an official KOP unless you register for an event, and pay your registration, so registering just to get a KOP can’t really be a thing.

You cannot actually get an official KOP unless you register for an event, and pay your registration, so registering just to get a KOP can’t really be a thing.

Registering for an event != attending an event. It’s possible to register for an event, get KOP, and no-show for various reasons. USUALLY it’s not intentional.

That is possible yes, but very very rare - though what I was responding to was “register, not register for an event, get a KOP, and never compete”, which AFAIK is not possible.

That’s why I deferred to you, thanks for the clarification. I wasn’t sure of the specifics.

Any way around it the growth in Turkey has been insane to watch as an outsider.

Teams usually die because of lack of money or lack of mentors.

One common thing I’ve seen is teams that are started by and really pushed by a parent and their kid, and then die shortly after that kid graduated. Nothing against those parents, FRC is taxing, especially when you’re the main driving force, but that’s another one of those barriers teams need to cross before they become self-sustaining.

Can the team fund itself once the rookie and second-year money fizzles out?
Does the team have continued mentorship from multiple committed mentors?

These things are often correlated with # of sponsors or team success, but aren’t the main reason - e.g. helping a team be more competitive isn’t necessarily going to help them sustain their team in FRC.

What is the attrition rate for rookie teams that did participate in an off-season before their rookie campaign?

(2) Is there data that looks at teams that died after having played in an offseason that summer/fall?

(3) Perhaps this is better for a different thread, but I’m curious about the scorched earth left behind. I know of several school systems that got burned by the JC Penney wave, and vow never again. Is there data for teams that have rekindled after having taken a season (or more) off, and what were some of the factors that led to the regrowth? I would assume a cycle of administrators and teachers with previous bad experience would help; I also wonder about the restorative power of younger siblings who saw their family members do a cool thing for a year or two, and they try to get the program up and running again. I have a hypothesis that there is a magic amount of time in which (under the right circumstances) teams can rise up again, in a more sustainable way.