Why is Minecraft Successful?

As a kid, I spend hours upon hours playing Minecraft, from mining to building to creating ingenious machines. Once I got into modded Minecraft, I was able to go even further, and build more and researching every recipe and contraption I could. This lead me to think, what cause me to pursue that game so feverishly?

ONLY cubes from now on

Almost as much traction as decagonal wheels.

But they weren’t quite cubes.

No instructions - you just know you can build stuff and explore. It’s literally human nature in a game

It can be fun whether you do the bare minimum or you can get a minecraft server and add a ton of mods.

I think It’s so successful because Its a very fun game and addictive like having the ability to build whatever you want with cubes like seeing what people build in Minecraft is honestly so cool seeing ships and cities made from cubes! i really like the game and i love trying to survive in the game and its just some much fun to play with friends and the mini games are very cool to.

It could the simplicity of Minecraft that makes it most successful. Instead of having confusing controls and mechanics, it’s easier to use for the younger audience to understand and have fun. Mojang also actively updates the game. Rather than leaving the game for 2-3 years, a major update goes out every year or so. The community could also be a reason on why it’s so popular. There has always been a decent chunk of people who support the game, even when some updates weren’t as popular as others. People have also made challenges to make the game more interesting. If you don’t quite enjoy a relaxing world, try speedrunning or servers where it’s more competitive.

I’ve never played minecraft myself, but my son @gixxy built some serious redstone circuits, including some seriously insidious combination locks and some awesomely majestic ALUs (Arithmetic Logic Units) and even some actual central processing units. While I never got hooked on minecraft, I totally understand the obsession, though I prefer to solve math puzzles and provide proofs. And in extremis, pull a computer back from find / | xargs rm -rf, using only the files that were left after /bin/rm was removed. (Yes, I did this once with a sun3, ca 1992.)

I love Minecraft because I can just build whatever my imagination feels like. I like building cities, and I can do that in Minecraft - it’s a lot of fun. 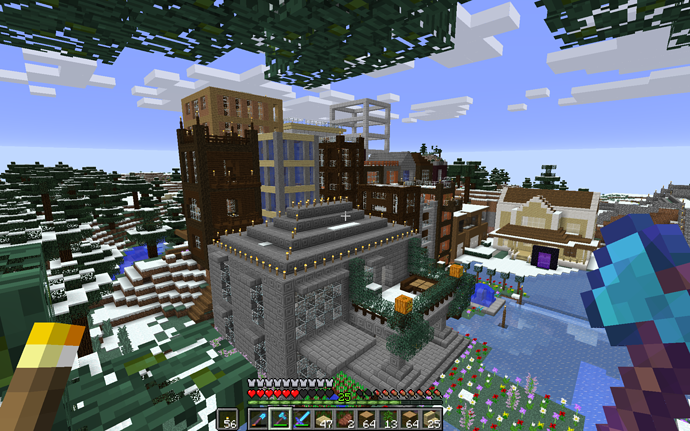 Downtown Dersaadet3840×2400 3.15 MB
* Thıs was a town we created with two friends at the beginning of the pandemic. I think it got a bit bigger than this before we gave up and started a warmer climate city, but anyways

The things I like the most is the appeal to everyone. There’s so much to do and many people connect to different aspects of the game.

Story time!
I actually started playing because of my FRC team. Before that, I thought Minecraft was another main-stream game that got a huge fan base. I tried playing on the web demo they had back in 2013 or so and decided it’s boring. Then in one of the season’s long night, we took a little break and a fellow friend from the team asked me if I wanted to play Minecraft with him. I said ok as I didn’t have anything better to do and was tired. A couple more friends joined and then I realized how much I missed by not playing the game with others. You feel like no challenge can stop you from having fun with your friends and you have freedom to do whatever you want (much like in FIRST).

Also, I think the Minecraft community is one of the bests and has a key role in keeping this game alive.

building cool stuff in minecraft = designing cool robots in cad
there’s competitive stuff in Minecraft servers which is similar to competition in robotics i guess.

figure out a way to make the entry to cad/design easier? idk

It is not expensive and when you buy it, you an almost do anything with barely any restrictions. Modding removes those restrictions which makes it even better. I do not play minecraft anymore, but when I was younger it was fun to just play a relaxing game and build whatever I wanted. I played a lot of split screen, which made it 2x better because I wasn’t playing alone and could so whatever I could imagine, which is just like programming, so I see why people like either one.