Why nylon and not polycarbonate?

I have seen that a few teams have used nylon sheets for parts on their robot like drive gearboxes what is the benefit of nylon over polycarbonate or aluminum?

Nylon is a lot more rigid than polycarb(which is needed in gearbox plates), and a lot easier to machine than aluminum

I’ve used polycarbonate to build gearboxes (both drive and otherwise) several times without any issue. I haven’t played with Nylon sheets that much, but polycarbonate 1/4"+ thick is more than adequate for just about any gearbox application, with the added bonus of being transparent to allow for easy troubleshooting if you do have any issues. Now that said, it is fair to say you would not design a polycarbonate gearbox the same way you would a nylon or aluminum one.

It’s worth noting that Nylon is also roughly double the price of Polycarbonate.

To be honest, when I first read the thread title I assumed you were going to be asking about 3D printing materials, since Nylon is FAR more common in 3D printing than is Polycarbonate (Polycarbonate generally has worse layer adhesion and requires higher temps to print than Nylon, in addition to being more brittle, which doesn’t make for good functional parts).

What do you design differently for a polycarbonate gearbox? I’ve only ever dealt with aluminum gearboxes.

Basically, you have to support the gearbox plates more than you would an aluminum gearbox. You could build an aluminum gearbox with two plates and some standoffs (like how many gearboxes posted on CD look), but since polycarbonate is more flexible, you basically have to make it a “box” of polycarbonate in order to support it properly and avoid having things move on you. It’s also harder to make a polycarbonate gearbox that’s wide (again, due to rigidity issues) so you’re limited as far as what kind and how many stages you can use.

Here’s an example of a gearbox my team used years ago, before COTS gearboxes were as common as they are now (note the aluminum plate was later replaced with polycarbonate): 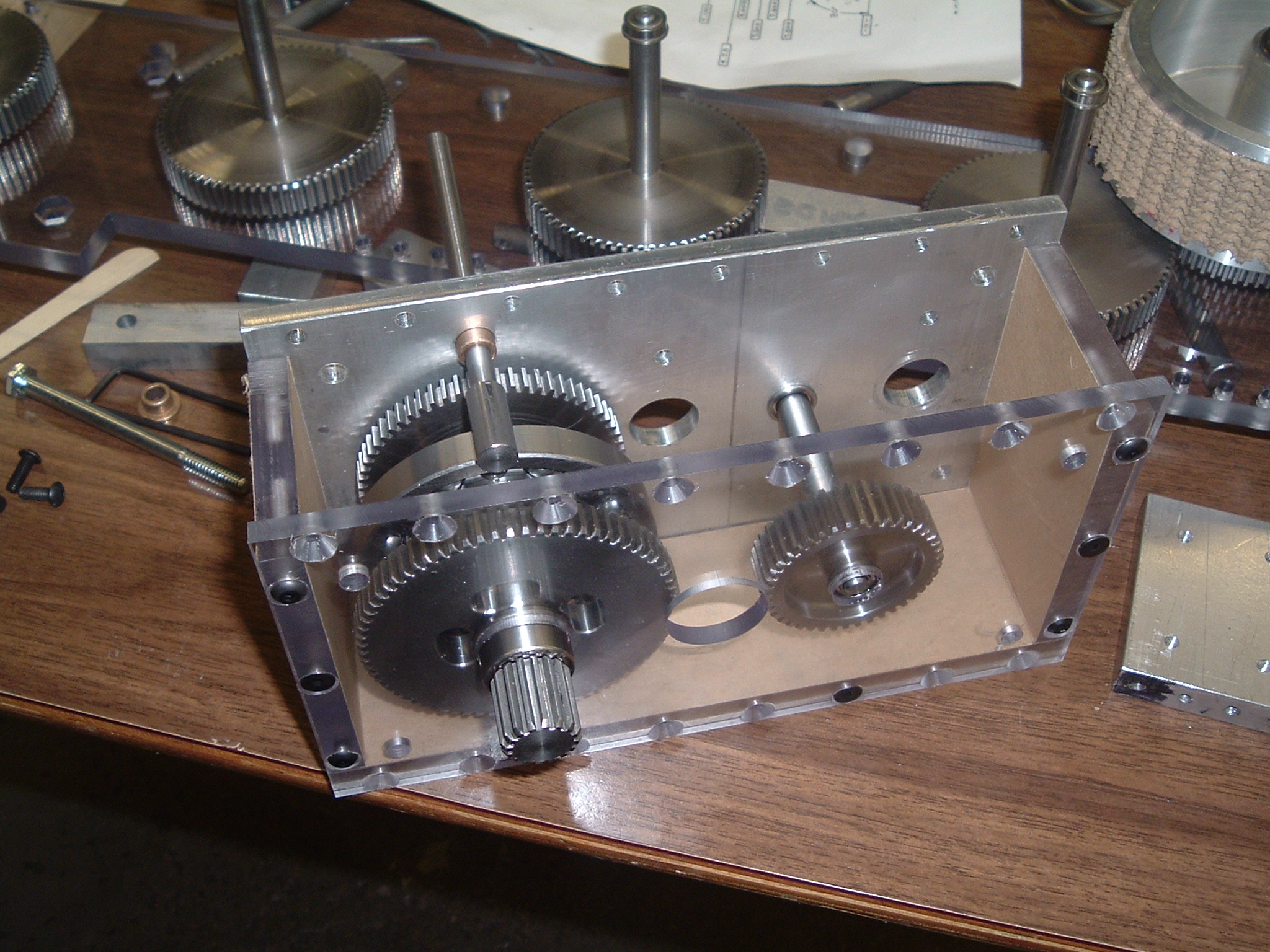 Polycarbonate is also susceptible to chemical attack from Loctite threadlocker and some types of grease and lubricants. The latter generally isn’t too much of a concern over the lifespan of a typical custom FRC robot/mechanism, but the former will happen within minutes.

Nylon can machine a good amount faster then polycarbonate on our router and doesn’t potentially crack or fracture at all like polycarb will.

We use nylon over delrin simply because of cost. UHMW and HDPE bend easier so we don’t like those options.

We pretty much design our nylon plates just like we do our aluminum ones. The only change we make is make the webs on our lightening patterns a little thicker but not much. In my experience most people way overbuild gearbox plates, whether they’re aluminum or plastic. Generally the most important part of a gearboxes strength is how it is mounted, not the strength of the plates/housing itself. Generally the mount point where be where something could fail.

As an added bonus for our team specifically black nylon is just better aesthetically then clear polycarb.

What thickness of Nylon are you using and where are you getting the material ?

We generally use 1/4" thick just to keep things simple and McMaster is the easy source.

an aluminum gearbox with two plates and some standoffs (like how many gearboxes posted on CD look), but since polycarbonate is more flexible, you basically have to make it a “box” of polycarbonate in order to support it properly and avoid having things move on you.

While this is a good way to build a polycarbonate gearbox, this is definitely not something you “have to” do. The use of additional standoffs or additional material thickness over the equivalent aluminum plate gearbox can also work. The important thing is just to support the plate more.

Nylon machines, or printed from a high quality printer, isn’t as flexy as polycarb which helps.

As an added bonus for our team specifically black nylon is just better aesthetically then clear polycarb.

We sourced solid black polycarb this year from Professional Plastics at about 1/4 the price of Nylon, it looks

…but the threadlocker issue is real [it got us in 2018] and we’re about to start lasering a lot more of our 'Bot, which the Nylon looks to be much better for… so we may switch over soon.

That’s fair, it depends a lot on the type of gearbox you’re building too. For instance, one time we made a gearbox that was basically just two gears in a 1:1 used to reverse the direction of a shaft, and it was just two pieces of poly and some standoff spacers, but I consider this more of an outlier.