Why Power a FRC Drivetrain with 775s?

Every once in a while, I will see a drivetrain show up that is being powered with around 6-8 775pros. But never when these drivetrains show up have I seen the thinking behind it. Why spend the motor resource on 775s instead of CIMs, Mini CIMs, or heck even then NEOs now? Can someone who made one of these drivetrains or know the thinking behind it explain? Is it the weight? the motor availability? Ease of repair? WHY?

(I don’t know the answer, I’m just offering another possibility that you didn’t mention)

We have never fielded a 775pro drivetrain; however, before the NEOs were announced we had created a test chassis. The reasoning for us was simple: weight. 775pros have a much higher power to weight ratio (due to their significantly lower thermal mass). I suspect with the advent of the NEO (and hopefully more) brushless motors, that the use of 775pros in drivetrains will pretty much tend toward zero – personally I cannot envision a situation where I would now advocate for their use as drivetrain motors.

I suspect with the advent of the NEO (and hopefully more) brushless motors, that the use of 775pros in drivetrains will pretty much tend toward zero

From a gear ratio standpoint, 775s are out on their own.
Reasonably popular, but they operate in their own speed range.

The barrier for NEOs is that a brushless motor drive is required.
The barrier for the 775s is the gear ratio management.
Everything is a choice! Good luck!

The primary reason was a higher power to weight ratio. Another reason why we switched to a 8 - 775 setup over a 4 CIM is you are spreading the load across more motors which allows you to run things a little harder and not trip individual breakers (which typically isn’t an issue). We switched our practice bot at one point from 775s to CIMs with roughly the same gearing (3:75:1 gearing additional with the 775s though) and our driver noticed a huge difference with acceleration and just general maneuverability.

We considered NEOs this season but due to lack of testing and documentation, along with a higher price (we reuse SRXs), we steered away from it. We are looking to do some testing during the off season with drivetrains using them since it would probably even save weight over using a 775 (less motors for safety, and less gearing required).

Even though 775s are air cooled, I don’t think we have ever destroyed one when we weren’t trying to. (We did slap some 8" wheels on a test platform earlier in the season that was geared roughly for 17 FPS w/ 4" wheels and accidentally stalled it when crawling up a wall with it).

CIMs and MiniCIMs are difficult to cool - the heat is generated in the rotor with no thermal path to the outside.

While you are not wrong that Mini CIMs don’t have a good thermal path to the outside, they also don’t really need it if you’re running six (as seems to be standard for Mini CIM drives). We ran ours hard with AndyMark thermal stickers on the end of each can, and none of them ever tripped a color even during longer practices. The temperatures got just barely above ambient.

Like most, absent further developments we will likely skip the 775 drivetrains and go to NEOs someday. From all the reading and studying I’ve done on the 775 drivetrains, it requires more bandwidth than our team should spend on a drivetrain when we can just throw three Mini CIMs into a 3CIM4U and run.

or heck even then NEOs now?

Neos were an $1000 untested investment 3 months ago, and not something a lot of teams can justify even now.

Can someone who made one of these drivetrains or know the thinking behind it explain?

We didnt want to be one cim per side on the drivetrain again, and MiniCIMs wouldnt of given enough acceleration to be worthwhile.

Can someone who made one of these drivetrains or know the thinking behind it explain?

I have posted the robot speed simulation we used this year to select our drivetrain components.
The posting is in the white papers section:
https://www.chiefdelphi.com/t/frc-1018-robot-speed-simulation-2019/354716/2

That work is my explanation to answer your question why!

Why yes. Just add a blower and the look is complete. 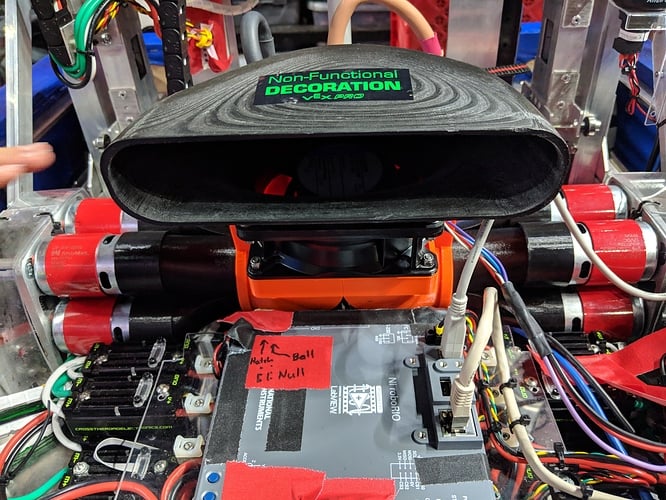