What is a wing nut? What are its uses?

Also, I am not sure if I am right or wrong but do wing nuts work autonomously; meaning as long as the threaded rod is moving, do they still tighten? For further clarity for example, for regular nuts, one would use a wrench to keep the nut from spinning and while the rod would sping causing the nut to tighten. However, for wing nuts does a person need that resistance (usage of the wrench) to tighten. Also, are there any nuts that self tighten like that? 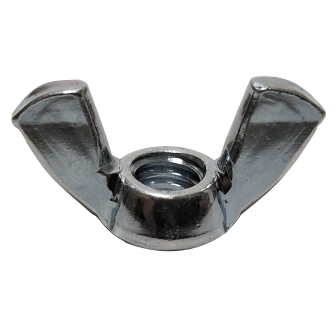 This is a wing nut.

The purpose of a wing nut is to have a tool that is easy to hand screw on and off. For example, Many teams use them as a way to mount bumpers.

A wing nut is just a regular nut with “wings” to make it easier to tighten by hand. You won’t need a wrench to tighten, but you do need to use your hand to keep the nut from spinning.

What is a wing nut?

A wing nut is a type of fastener that has female threads down the middle, and handles or “wings” that stick off the sides, allowing them to be tightened easily by hand.

What are its uses?

They are best used in applications where you need to bolt two things together without the use of tools. 2102 uses wing nuts to hold our bumpers onto the robot.

I’m really unclear what you’re asking in the second half of this question though. Maybe you could show a drawing or photo of exactly what you’re trying/wanting to do with a wing nut and someone can comment on that? Really, they aren’t functionally any different than a standard hex nut, except they’re tightened by hand instead of by wrench.

Edit:
These are wing nuts

However, for wing nuts does a person need that resistance (usage of the wrench) to tighten. Also, are there any nuts that self tighten like that?

Yes. There are some wing nuts that are locking nuts that need extra torque to tighten. However, most of them are not locking and can just be hand tightened. (I have never had to use a locking wing nut before)