I’m still in shock. This is a loss beyond comprehension.

He was so much more than the icon that appears on the pedestal. From all my time with him, from my viewpoint: he embodied the value system he espoused so fully, it makes me want to be a better man. Most of all - he was unflaggingly generous.

I hope his impact never diminishes… and I guess that’s up to us to ensure. He’s been a moral compass, role model, and inspiration for so long and for so many people. I suspect many of us will spend the rest of our lives trying to live up to his example.

Thank you Woodie, and Goodbye.

Thanks for that blog post John. It’s great to read more about him from someone who knew him well.

I still can’t believe it. I’m very fortunate to have had the chance to meet him during Recycle Rush at the event that my school hosted. As everyone else has already said, he was such a sweet and genuine dude. In the brief moments I had to chat with him, he told me something along the lines of “believe in yourself, you’re going to do great things someday”. I could tell he meant it.

Fast forward to finding out the news of his passing, I was the game announcer at the Bloomfield All Girls Event that day. Jim Zondag was the emcee, and when he made the announcement, everyone in the room gasped. Him and I both had to fight back tears so we could finish calling the playoffs.

Needless to say, it’s hard to imagine future seasons without his presence, but as Jim put it the other day, we should continue on, being a part of what he loved best. I have no doubt he would be very proud of all of us and that his legacy will live on in all of us.

That’s the thing… I did NOT know him that well. He just had a knack for making connections with people and I’m fortunate that our paths crossed many times in the last 18 years.

I’m happy to have shared my memories of him, and hope many others will do the same.

imagine future seasons without his presence

As long as Woodie is remembered, his presence will stay with us, and live on through us.

One of my few direct interactions with Woodie was the fantastic, delightful joy of speaking directly with Woodie at the 2018 and 2019 Detroit World’s, both at the event itself and the alumni mixer at the socials. When I spoke with him, what stuck with me was his sheer excitement for the event. He was another fan, just like the rest of us, and so much more. We talked about wild matches we’d been able to view during the day, silly and fun happenings.

Woodie was one of the first leaders of FIRST that I was ‘introduced’ to when I first joined as a confused 7th grader on an FLL team. Like many others here, he is a huge part of the reason I fell in love with the program, the message, and the passion we all have for what we do. I became part of FIRST because I saw an elective course called “Lego Robotics” and thought “Man, what could be better than that?” Woodie was part of an answer to that question that I could never have dreamt up or possibly come to expect.

Beloved teacher and pioneer in hands-on engineering education developed design and robotics competitions at MIT, FIRST, and beyond, while promoting his concept of “gracious professionalism.”

I always thought I would be much much older by the time I had to write this message.

Woodie will be missed beyond belief by thousands of people. Everyone here remembers it, but I am always struck by how Woodie ended his conversations. Despite being a co-founder of FIRST, despite being a professor emeritus at a prestigious university, despite most likely being the keynote speaker at your event, Woodie always asked for you to sign his shirt. Woodie’s message was always that you were the celebrity not him. His genuine kindness and his grace with be thoroughly missed.

FIRST Team 1885, ILITE Robotics, would like to join the entire FIRST community in extending our deepest condolences to the family and friends of Dr. Woodie Flowers. His passing is a significant loss for FIRST Robotics, as well as for the world at large. Dr. Woodie Flowers understood, like most celebrated leaders, that he could inspire people to dream big. What made him a visionary, however, is HOW he inspired people. Dr. Woodie Flowers was one of the rare few who realized that by showing genuine kindness and interest in peoples ideas he could light an inextinguishable fire within them, a fire that burned so brightly they were compelled to chase and conquer their dreams. Since our inception, Woodie has been an incredible friend and inspiration to the mentors, students, and alumni of our team. He succeeded in lighting inextinguishable fires within each of us to chase our dreams and pursuit of STEM and implement gracious professionalism. We hope we are able to carry on his legacy by cultivating that fire in the next generation. Rest In Peace Dr. Flowers.

Nobody cares how much you know until they know how much you care.
FRC Team 1501 T.H.R.U.S.T. send their condolences to the Family and Friends of Woodie.
Rest is Peace Prof. Woodie Flowers.

I am disappointed that the only information FIRST has on the website is the blog post. I would of expected something on the landing page. I contacted FIRST and was told that at the moment that is all they have. Suggestion was passed on.

It’s difficult the quantify the magnitude of this loss. How do you even describe how awesome Woodie was? Someone many of us have looked up to for decades now.

But when you start to think about the tens of thousands of students who have participated in any number of robotics programs that all spawned from Woodie’s course and vision, you can’t come to any other conclusion - he changed the world.

On a personal level, I have met so many good people and made so many friends because of the program he founded. It’s amazing how much of a ripple effect one person can have on the world. The cost of inspiring so many is that one day you must leave them behind. I have no doubt that this community will continue to champion the good stuff Woodie often talked about.

Back during my senior year of high school I got the chance to talk to Woodie for a few minutes.
I wanted to show him the Firstopoly board I created and we were showcasing at events.
So I had printed out a smaller copy to show him as the full size was hanging in the pit, and as I Introduced myself he stopped me.

“ I know who you are, you created the custom monopoly board that’s now my desktop background. You did a very good job.”

When I mentioned I created all the other parts for the game, he asked me to email it to him.

He immediately smiled and said it would be amazing, and later on emailed me how much he loved it and hoped we can spread the word of FIRST through it.

That enough was something that inspired me to keep doing graphic design in my free time and during college. I would later switch to a degree in graphic and video.

Thanks for everything you’ve done for the community and helping inspire so many.

Woodie is gone, but not forgotten. 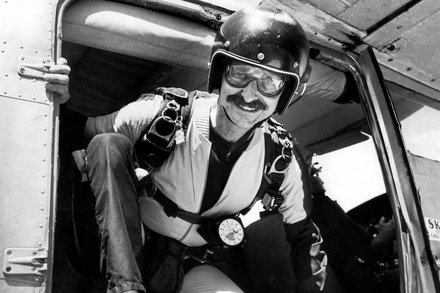 Woodie Flowers, Who Made Science a Competitive Sport, Dies at 75

His hands-on methods of teaching mechanical engineering at M.I.T. made him a star on campus (and on PBS) and led to student contests on a global scale.

Team 3566 (Gone Fishin’), Southborough, MA mourns the passing of Woody Flowers. All of what we do with FIRST Robotics has been shaped by Woody and his ideals. We will always remember Woody and always strive to follow his ideals of gracious professionalism and coopertition!

Sunday today just had a segment on Woodie. Nice piece 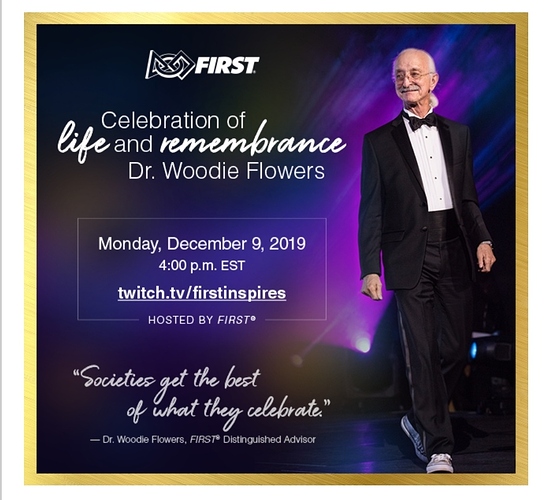