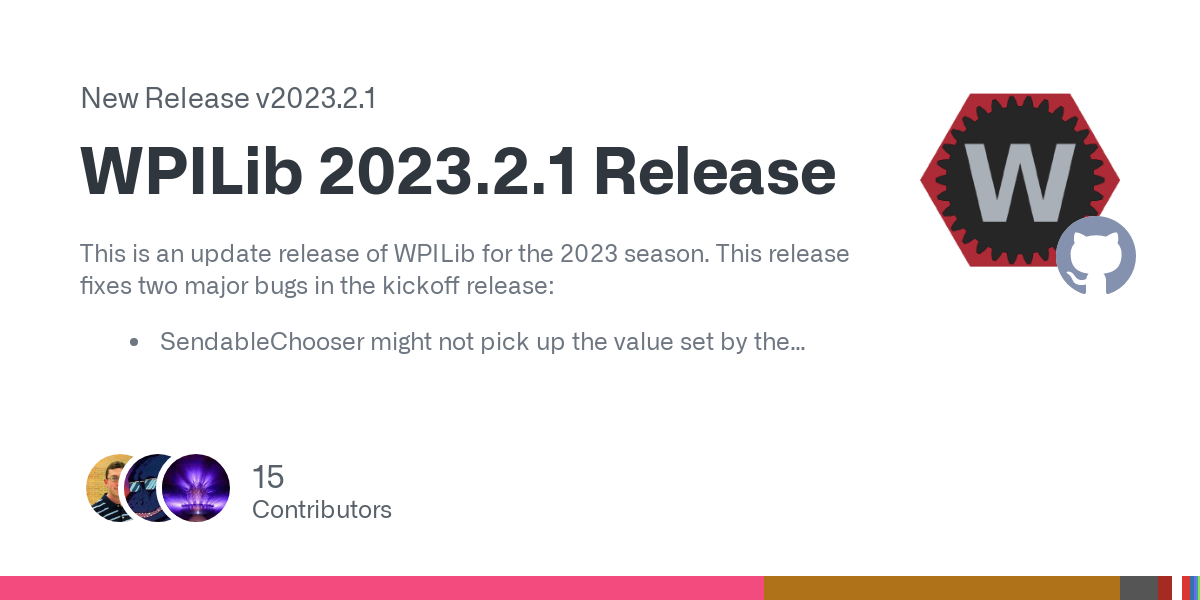 This is an update release of WPILib for the 2023 season. This release fixes two major bugs in the kickoff release: SendableChooser might not pick up the value set by the dashboard Calls to NT flu...

This is an update release of WPILib for the 2023 season. This release fixes two major bugs in the kickoff release:

Significant new features in this release:

Upgrading from the kickoff 2023 release is easy: simply download and run the new installer and it will update your current installation. If you already have the 2023 WPILib vscode installed, it will detect it and you can simply click “next” for that installation step. After installation, vscode will prompt you when opening your robot project whether you want to upgrade it to this version. Note that using the installer is required to get the new version of desktop tools such as Shuffleboard.

If you’re new to FRC, start with Getting Started.

WPILib is developed by a small team of volunteers and the FIRST community.

Do we need to install the new ISO, or in our code, can we change the file build.gradle line 3 to id “edu.wpi.first.GradleRIO” version “2023.2.1” and get the changes?

If in VS Code, there is a task in the command pallet that updates WPILib. Ctrl shift p, update

This is very much not recommended and will cause broken behavior.

If it isn’t reccomended, why is it included in the WPILib extension?

It’s required as a VS Code extension AFAIK

I don’t know any other VSCode extensions that offer that command in the command pallet. It updates the version in the gradle files for the project as well, which definitely isn’t a requirement from VSCode.

That function exists because some people use wpilib without running the offline installer. That works, but we can’t guarantee it will work in competition, as gradle sometimes likes to delete caches.

The offline installer ensures this doesn’t happen, as it contains an offline copy of all dependencies.

The setup is built to work fully online, but we really prefer to push teams to the offline setup. Especially teams that are asking how to update, as they likely don’t have an understanding of what the different installation methods are and why we use and recommend the offline installer.

To answer the question directly instead of the above indirect response, it’s HIGHLY recommended to download the new installer and rerun the installer. It will install in place without issues, and it will ensure you won’t have wpilib dependency issues at competition.

I noticed that I wasn’t getting the new 2023 field in Shuffleboard. So, I ran the installer again and did a tools only install. Still didn’t get it. I ran the whole installer again… didn’t get it. I deleted the tools folder and that was a mistake! Neither a tools only or a full install got me functional (Shuffleboard wouldn’t launch gradle was trying to download it that kept failing). So, I deleted the entire wpilib/2023 folder and reinstalled. That did work. Just sharing in case somebody else is struggling too! Running a Mac M1. If (when!) I do it again I will save my vscode folder so I don’t have to do reconfigure my extensions and preferences.

The students who had Macs were not able to install this release. It asks to select the artifacts. When they select it the file chooser stays up and you can then only select cancel. We tried removing the entire 2023 directory to do a fresh install but the same thing happens. We then downloaded the 2023.1.1 release and it installs without issue. Any ideas on how to get them up to the 2023.2.1 release? 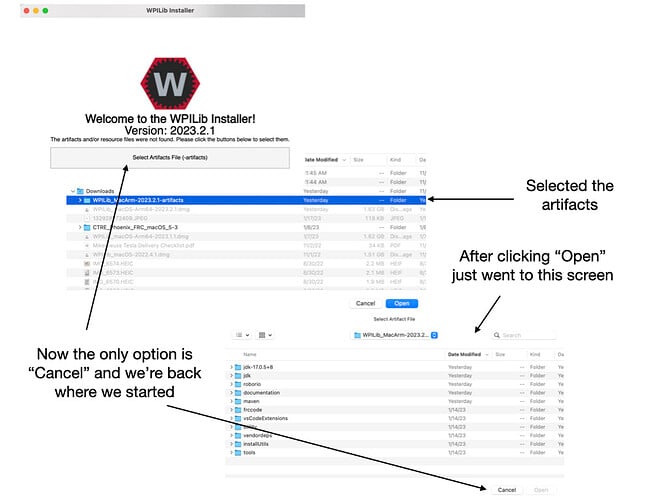 Did you download the x86 or ARM version of the macOS installer?
Is the target mac machine x86 (legacy machines) or ARM (M1/M2)?
Were any other disk images mounted before running the installer?

It installs “without issue”, but I am having a devil of a time getting it linked in with GitHub Desktop. GD only “sees” the older VSCode for editor linking. And the new install doesn’t “see” my existing 2023 repository, just keeps asking to import the older 2022 project.

Check your paths… remove the old paths or order them correctly?

Paths? Where are these in menus? If you’re talking about OS %PATH%, if the installer couldn’t set this correctly, I’m not going to trust myself to fiddle with it.

Yes the OS path…. I have faith in you! (You can always change it back.) I don’t use the github desktop, but perhaps where you specify the default editor you can explicitly choose the path? You can for git. It is confusing have 4 versions of vscode on my laptop, but it is also helpful.