I think your robot is missing…

Yeah lol the file type was too large coming soon.

Video appears to be up now, but its sideways.

working on the fix

Very nice robot. Well done on the challenges, especially the shooting ones where your team was tops in NC. I worked up this spreadsheet of NC team’s scores as if we were a group of our own and you beat my team out for the #1 spot by 1.5 points (the state rank is in the far right column, while the team numbers are in their order as determined by our calculated scores in our original groups.) What’s nice to see is that we both did this well with actual competition robots, not highly specialized machines that could only do the skills challenges. Congratulations on a fine performance!

Our robot is mostly a competition robot but we would make different choices building it for rough play. We built this robot to act as a vision system classroom, a tiny demo robot, and a competitive 2021 contender. I think we did well and got all 3! I want to see how you guys got those driver scores!

Mostly by having a fantastically fast robot (top speed was 20fps) and using a contour drive that gave us excellent control at speed. That, a lot of driver practice (many hours over quite a few weeks), and an excellent programming team who really aced the autonomous programming. Honestly, we could have shaved another 0.4 to 0.5 seconds off our Galactic Search time if we’d sped up the drop of the powercell scoop just a bit more at the beginning of the run, but the programmers were afraid that they’d go too far and damage the scoop, something that happened with an earlier version. If we’d done that we might have slipped by you guys into first place, but that’s hindsight and about as good as hindsight always is.

We’re pretty happy to have come in second in the District, a far higher placement than we’ve ever managed before.

20ft/s?! What ratio and motor setup did you guys use this year? Either it was a tiny bot or your driver took a lot of time to master that kind of output. 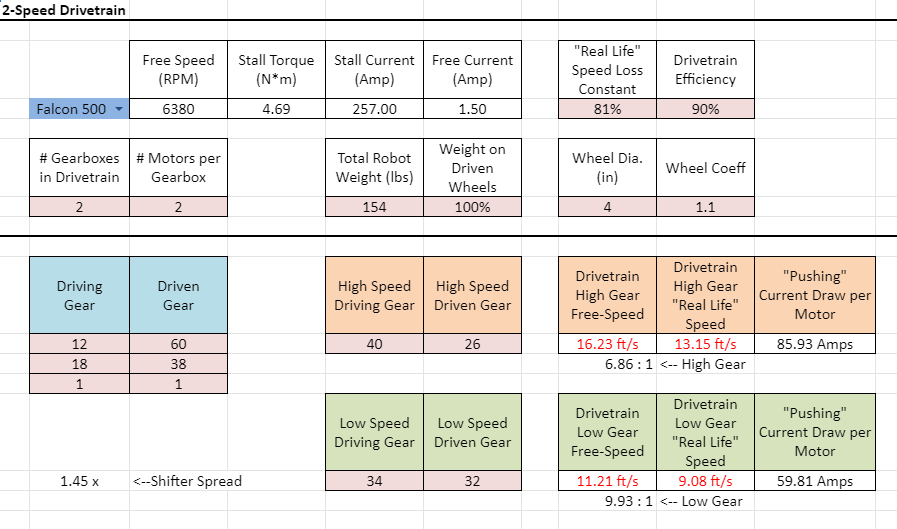 image897×529 19.1 KB
Our top speed was significantly lower at 13ft/s because we used a sprint distance calculator to measure how quickly we needed to accelerate and decelerate. The difference was we got to top speed very quick and stayed there through the entire run. We did wish we had added a bit more to our top speed because after the driver mastered the acceleration and staying at top speed we wished we had squeezed a bit more out of it. We could have managed a 14 or 15 at top speed. The painful thing was that we actually lost two of our best runs in recording accidents…which definitely would have put us higher in our division. Not that we would have beat 1619, that was a legendary speed. Our bot only weighed in at about 100 pounds bumper and battery loaded.
Strategic May 1, 2021, 5:55pm #12

We were using a VEXpro 2-speed ball shifter gearbox with the gears selected specifically for high speed in the high gear position. We powered it like you did, with two Falcons per gearbox, but used 6" High-grip wheels. The combo worked out to give us 20.5 fps in high gear and 9.02 fps in low gear. Here’s the specs from the calculator: 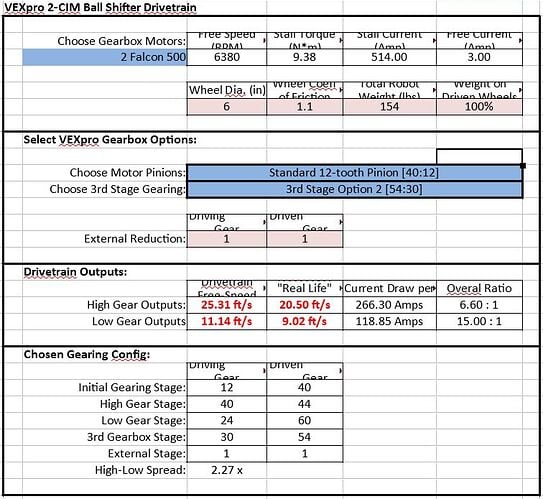 2-speed gearbox spec-sheet756×696 105 KB
It really gave us the edge in speed. The control was partly using a contour drive system, which we’ve found gives much better control at speed, and a whole lot of driver practice to learn to handle it. Since our whole focus for 2020 was on the idea that we would cycle as fast as possible, this was a logical choice. We’re a low-goal bot, but designed to deliver enough powercells to get the in-game rank point no matter who else we were in alliance with. It turned out that this strategy gave us an edge when it came to the driving parts of the Skills Challenges, but left us out of the shooting parts (we didn’t even try for the Accuracy score, there was no point in a low-goal bot.)

We were pretty much resigned to not winning our division either, once we realized we were up against 148 (Robowranglers), who did indeed win it (not that anyone was surprised by this.)