Would anyone be willing to share how they used this data to inform decisions on match strategy, alliance selection or anything? I think there is so much potential that I’m sure some teams have some creative uses for it.

Certainly helps with not being able to read bumper numbers from this angle!

That’s wonderful! If that could be done live, it would make the matches SO much more watchable on the stream/bigscreen!

Great work! We love to see this and actively encourage the community to produce more of this type of experience enhancing content! We, too, have investigated some of this and there are no technical reasons why this could not be done on a 2 second delayed live stream.

Here we post-processed data in 2019 at IRI, we also included a small bar to indicate current robot speed as well: 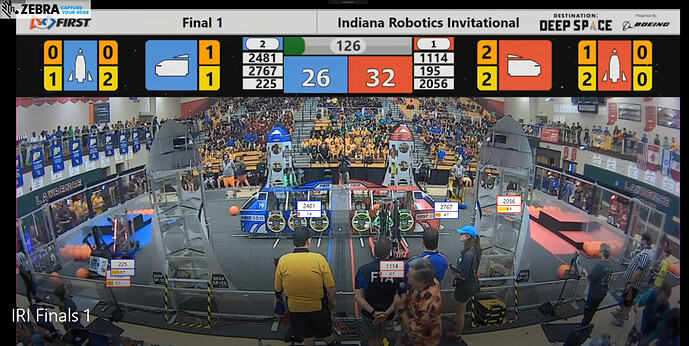 We had also implemented displaying a bar indicating distance to the nearest robot as an indicator of how tight defense was being played.

We are looking forward to seeing what else can be done!

If anyone is looking for ways of how to use this data, I’d recommend getting some ideas from ballchasing.com. It is a website that gets a lot of similar data from Rocket League games and makes a lot of interesting graphs and charts from it.

I don’t know much data will be gathered in the future, but currently with the locations of the robots you could make heatmaps like this one, and track how much time teams spent in different areas. For this year, you could have used a heatmap to see where robots typically shoot from, to defend more effectively.

Is there any chance that something like this would be implemented by FIRST for all teams? Could something similar be used to track game pieces for future seasons?

I have no idea what the scope of this will be for the future, but I’m excited to see where it goes!

6328 mounted the sensors for Einstein. As we described in our Build Thread, we made extensive use of our AdvantageKit logging framework this year, which means we have very detailed data sets from all of our matches - including captures of all the odometry data. We can now compare that to where the Zebra tracking says it was to gain insights as to how well the robot’s odometry performed. Our software team is in the midst of this analysis now, and we’ll have a post up on our Build Thread discussing the results once we finish it.

I’m really excited to see how on field odometry compares

This has led to some interesting and lengthy discussions here that has now led to more work for me so thanks haha. Not sure if you know how many challenges this would solve for us regarding this FRC specific solution but it will require investigation and I think it’s worth following up on.

As a geographer I have a burning desire to scout with spatial data that is not human collected. There is so much you can do in terms of spatial statistics, on top of all that it’s time series data as well!

Given the correct game and these data being available I would love to make a tool to throw some spatial stats and pattern recognition into the fold. It would be so cool to optimize tele robot paths, see complicated autos, and implement defensive strategy.

I would love to work with a complete data set from this year at a super high level of play (IRI?). This year’s game is the best for zebra in recent years imo.

I think it’s worth following up on

Ok, so lunchtime testing tells me there are no technical reasons why this wont work.
This could dramatically reduce tag administration and collection requirements, YoY cost, battery life, tag bandwidth at a large say, 450 team event…

Anyone have a CAD model for an RSL or know off hand if an RSL can be easily opened?

Not guaranteed identical, should be very close

Onshape has an app called MKCAD in which they gathered standard FRC parts, and then you would just insert the part into your project.

I can see a team having one of these tags on their robot, taking it to their respective competition. Programming it like how a team would their radio and install it like so. 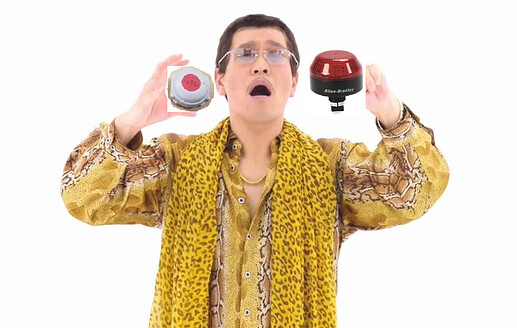 Motion tracking as a standard for every single team? Built into already existing systems???

Sadly I don’t make those decisions

What do you think the maximum feasible scope for this would be? One on every bot, potentially built into the RSL?